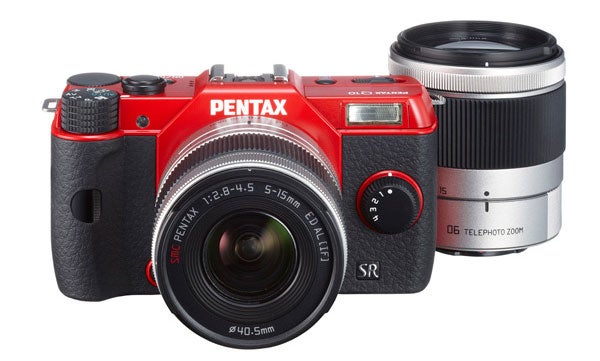 We haven’t heard all that much from Pentax’s adorable Q interchangeable-lens compact camera since it was launched in 2011, but now there’s a new body and a lens adapter to give the system a boost.

The Q10, according to the press material, is about the size of a pack of cards and packs the vast array of filters and creative shooting modes found in the original Q. The back-illuminated CMOS sensor has a 12.4-megapixel effective resolution, which maxes out at 6400 ISO.

The improved sensor combined with a re-worked algorithm has helped to improved AF, which is something the original Q had a bit of trouble with. Like Pentax’s DSLRs, the Q10 has built-in Shake Reduction so the lenses don’t require stabilization.

Video mode tops off at 1080p at 30 fps, but you can access some of those adorable Smart Effect modes in motion picture capture as well as still. The feature set is rounded out with a pop-up flash and a maximum burst rate of 5 FPS in JPEG still mode.

It will be available in October in both Silver and Red with the 02 kit lens for $599. That’s just $50 cheaper than the Sony RX100 advanced compact and roughly the same price as a whole slew of other more advanced ILCs, so it has a lot of competition. It does, however, look like Pentax is taking the Q in a bit of a more serious direction since it doesn’t look as much like a toy camera, at least in my opinion.

The K-mount adapter is one or the more interesting pieces because the Q’s small sensor size will mean a crop factor of more than 5.5. Plus, the adapter will cost $249, which is a bit pricy for a system like the Q.