Pentax's tiny ILC is adorable, but more than just a toy 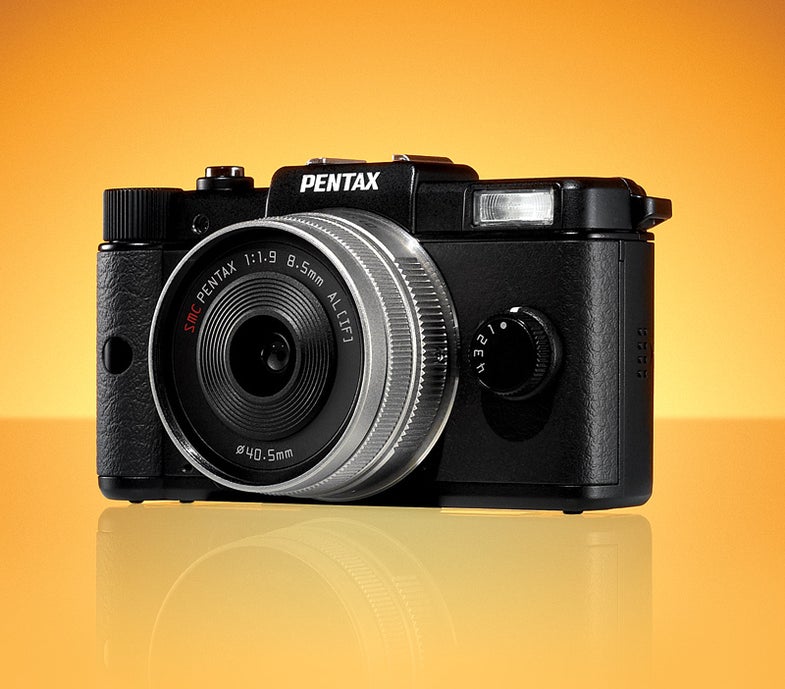 When we saw the first mirror-less interchangeable-lens compact cameras just a few years ago, it was clear that the main reason the mirror went away was to allow for smaller cameras and lenses. And while the first models to hit the market were indeed smaller than DSLRs, none were truly pocketable—at least not with a lens attached.

But Pentax’s Q ($800, street, with kit lens) is smaller than any ILC we’ve held. It is so little that some people think it is a toy at first glance. But with a 12.4MP sensor—albeit a small 6.17×4.55mm one—and all the controls you’d expect from an entry-level DSLR, the Q qualifies as more than a plaything.

In the Test Lab
As we expected, the Pentax Q’s small sensor size limits its resolving power while making noise a sticky wicket. In our standard test results, which are based on TIFF files converted from RAW using the camera’s included software, the Q scored only an Acceptable rating in resolution, with 1700 lines per picture height.

Furthermore, as ISO increases, its resolving power falls off and the noise level rises. Since the modified version of the bundled Silkypix software does not increase the noise reduction as the sensitivity setting increases, our official noise results look worse than you’ll experience shooting JPEGs at higher ISOs. For example, at ISO 800 the Q scored Unacceptable noise levels from TIFFs (4.5) while JPEGs earned a Moderate (2.7) rating. At the top sensitivity setting of ISO 6400, TIFFs scored an 18.2; JPEGs, 3.6.

When you look at resolution at those ISOs, however, you can see why. At ISO 800, TIFFs converted using the default noise reduction yielded 1640 lines, while JPEGs converted in camera turned in 1520 lines. At ISO 6400, TIFFs resolved 1480 lines; JPEGs fell to 1225 lines. (Experimenting with NR during RAW conversion can balance noise against resolution—if you are willing to do this.)

Color accuracy was decidedly better with TIFFs, which showed an average Delta E of 6.5, while JPEGs scored a 10.1. The TIFFs earned an Excellent rating, while the JPEGs fall two bands to High.

In overall TIFF image quality, the Pentax Q earned an Accept-able rating from ISO 125 through 200—in line with what you might expect from a compact.

For comparison, we tested the Canon PowerShot S95 (see PopPhoto.com/buying-guide/compacts) and measured more resolution, with 1940 lines at ISO 80 from TIFFs converted from RAW files. This may be due to the S95’s slightly larger sensor, which allowed Canon to apply less resolution-robbing noise reduction. Still, the Q outperformed it on color accuracy and noise at ISO 200.

If the Q attracts snapshooters who won’t ever make large prints, its lower-resolution images should be fine. Plus, if you shoot only JPEGs, then the noise shouldn’t be too bothersome.

In the Field
The Pentax Q’s small sensor definitely pays off when it comes to body size. (That’s not a given, as we found in our test of the Nikon 1 J1 last month.) We expected its handling to be irksome, but we were pleasantly surprised. Pentax’s designers did a great job of creating a cute little body that feels solid and provides plenty of access to controls.

While some ILCs relegate too many functions to menus, the Q strikes a nice balance. The menu navigation buttons double as access points for ISO, flash, drive mode, and white balance. Exposure compensation gets its own button, since there’s room for only one command wheel. There’s even a programmable button—surprising, as the 3-inch 460,000-dot LCD takes up most of the back of the camera.

The most significant omission is a viewfinder, but given the size of the body (did we mention how tiny this thing is?), it makes sense.

The shooting experience felt very much like using a compact camera, just a very responsive one with fairly quick autofocus. The Pentax Q isn’t the fastest-focusing ILC around—Olympus and Panasonic have it beat, for now—but it was fast enough for us to get most of the shots we wanted. In low light, it becomes noticeably slow, but that can be said of most non-DSLRs.

Don’t look to the Q for intensive bursts. At its top speed of 5 frames per second it can only hold up to 5 frames in its buffer. For more casual photographers trying to capture the best of a short burst of shots, this should suffice.

If you like to switch among different shooting modes often, note the dial on the front of the camera. You can assign a shooting mode to each of the four numbers on it, allowing you to switch in a jiffy. We assigned black-and-white shooting to one of the numbers, and a few of the other Smart Effects modes to the others, and had fun switching to them whenever an appropriate scene presented itself. Video shot on the Q looks good. For casual shooting, such as clips of friends and family, the Q does an admirable job, but a dedicated video cam will likely be better at focusing on moving subjects.

While we had fun shooting, we did feel limited in our choice of lenses. Given that this system is still quite new, we can’t fault Pentax for this just yet. We will say that there is a big difference between the serious Standard 1 (47mm equivalent) f/1.9 and Standard 2 (27.5–83mm equivalent) f/2.8–4.5 lenses, and the so-called Toy lenses: wide ($80, street), tele ($80, street), and fisheye ($130, street). The Q’s body doesn’t have a mechanical shutter, so the Toy lenses use the sensor instead; the Standards have shutters built in. As their moniker suggests, the image quality of the Toys does not equal that of the Standards. Nor do the Toy lenses autofocus, so you must focus manually using scratchy plastic rings with a tiny turning radius.

As with its DSLRs, Pentax built sensor-shift image stabilization into the Q, which works with any lens you mount on the camera. The stabilization system afforded our testers an average of 2.5 stops at the long end of the Standard 2 zoom lens.

For photographers who are looking for their main camera, and who prize image quality, the Q is a tough call. But for shooters looking for something fun, small, and unique, the Pentax Q delivers, without question.