Kit lens offers more than most 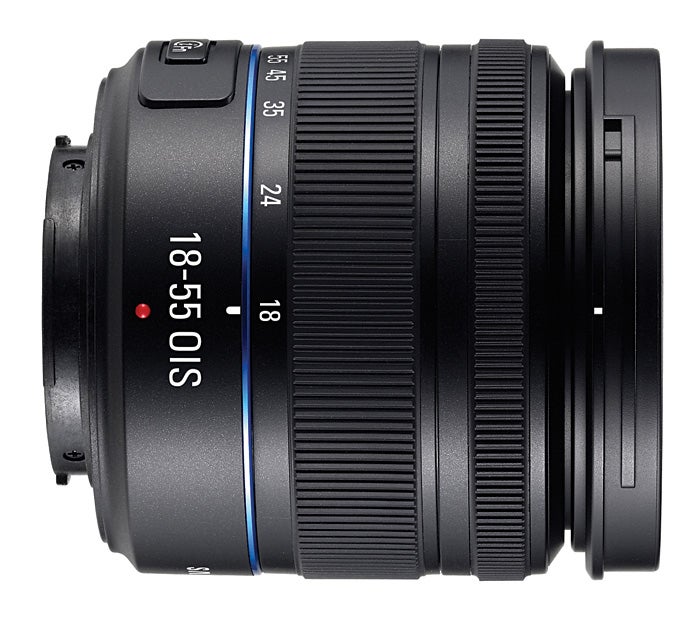 A standard-range kit zoom for the Samsung NX200 interchangeable-lens compact, this lens (a Version II) is also fully compatible with Samsung’s NX10, NX20, and NX100 bodies. Given the size of its image circle, the lens’ focal range matches that of almost all APS-C-format DSLR kit zooms as well as recent APS-C lenses from Fuji, Samsung, and Sony for the now-booming ILC format. This Samsung is the very first ILC lens that we could bayonet onto our optical bench for SQF tests, thanks to a mount supplied by Samsung.

A 29–82.5mm full-frame equivalent with on-board optical image stabilization (OIS), this light though not-so-compact lens delivered Excellent-range SQF numbers across the board. At 55mm, it ranked slightly below comparable Nikon, Pentax, and Sony DSLR kit zooms, and matched the performance of the lens’ first version.

Distortion control, as measured by DxO’s Analyzer 4.1, also (almost) matched comparable APS-C ILC kit zooms from Sony and Samsung, but paled by comparison with the DSLR lenses. At 55mm, for example, the Samsung showed Slight (0.28%) pincushion distortion compared with the Imperceptible-range pincushioning of DSLR kit zooms.

The Samsung’s top magni-fication of 1:3.6 similarly underwhelmed us when compared with glass for DSLRs, whose approximate average is 1:2.5. This dynamic reversed itself, however, with edge falloff: The Samsung (and similar ILC kit zooms) topped the DSLR zooms, with no detectible edge falloff.

The Samsung’s killer feature? A barrel-mounted “iFunction” button. Pressing it and turning the focusing ring lets you adjust shutter speed, aperture, exposure compensation and other settings as you support the camera by the lens barrel—very cool. Ask for the iFunction feature by name, because some online ads for the new lens don’t distinguish it from the earlier version, which may still be in the pipeline.