A Skull, An Egg And 14 Other Unusual Objects Turned Into Cameras

Metal and plastic are great, but these DIY cameras are stand-alone pieces of art 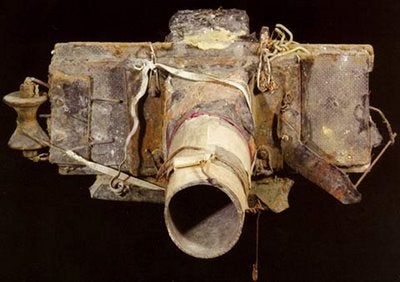 Most of the cameras we write about here at Popular Photography are made of familiar materials like plastic and magnesium alloy. But, the simple fact is you can make a camera out of almost anything. In fact, many of us as children took on the task of making a camera from an oatmeal container or even a match box. But why not something less conventional? A trash bin? Sure! A dead turtle? That’s a little creepy, but why not? Photographers are creative people and their imaginations don’t end, or even begin with the photograph. Here’s a collection of cameras made from odd objects. And yes, a dead turtle really is one of them.

The floppy disc is about as obsolete as a piece of technology can get, so it’s nice to see someone putting at least a few of them to good use. The Black Eye camera uses a typical 3.5-inch disk, coupled with a plastic container to act as a camera. It uses typical 35mm film and creates images that are predictably lo-fi. The coolest part is that the sliding metal mechanism which originally allowed the disk to be written to and read from now acts as the shutter. Pulling it down lets in light, which exposes the backside of the film. You can see some sample images over on the official site.

For their now-sold-out book “As Long As It Photographs It Must Be A Camera,” Taiyo Onorato and Nico Krebs photographed a variety of cameras very much in the spirit of this article. You can read an interesting interview with them over at Americanphotomag.com. But of all the odd cameras included, it’s the Turtle Camera that really sticks out.

Apparently the Turtle Camera does actually work. The camera itself places a large-format lens at the end of the shell where the head would normally be. There’s a film holder cut into the shell in the middle. The shutter predictably works with a cable-release, so it seems safe to assume the Turtle Cam has a tripod socket in its belly. It would probably look just great sitting atop a taxidermied flamingo monopod.

At this point in time, there’s something poetic about the idea of exposing photographic film using a printed book. One of our favorite examples came from an Etsy user who was transforming tattered hard covers into full on photo machines. The magnetic shutter was complemented by winding knobs that allowed it to make pictures using standard 35mm roll film.

Of course others have had the same idea. Taiyo Onorato and Nico Krebs who we mentioned back in the entry about the Turtle Camera did a similar project using a stack of books. It’s a lot cheaper than using a stack of Kindles.

Last year, for the 10th anniversary of the September 11th tragedies, we got the chance to talk to Joe McNally about his Faces of Ground Zero project. To get the life-sized portraits, he used the Polaroid camera at Moby C in New York City. It’s literally a room and creates Polaroid images as big as nine-feet. It uses a lens taken from a military spy plane to achieve shocking detail when the prints are examined up close. According to Joe, each exposure cost about $300 and the camera is no longer in operation because of a lack of materials. It required three people to operate, two of which had to technically be inside the camera. Truly fascinating. Of course, you can always get a small taste of it by doing the age-old camera obscura trick with your window.{C}A Delivery Truck

A rather shady-looking truck full of toxic chemicals and guys with gas masks sounds like something out of Breaking Bad. But, for Ian Ruhter, the whole thing is a camera. The old delivery truck is used to make large-scale wet-plate photographs of beautiful places. He built it himself by adding a sheet of black out material to the back of the truck with a lens in the center. He then develops the photographs right there on location, mostly out of necessity.

According to Ruhter, each photo costs roughly $500 by the time it gets to finished product. To listen to him talk about his work, though, makes that seem almost reasonable.

Believe it or not, the noble pumpkin is actually a relatively common object for hacking into a camera. They’re cheap, the flesh is easy to cut into whatever shape you want, and once you scoop out all that goo, there’s plenty of room inside for light to move freely from front to back. You can find several tutorials online (one is posted above), and they make for a good starter project because pumpkins are a lot easier to come by than 150-year-old skulls. Plus, because it’s a pinhole, you can use a piece of gaffer’s tape over a small hole as a shutter and a lens.{C}{C}{C}{C}{C}{C}

Cameras and guns have a long history together. In fact, that relationship deserves its own full-on article, but one of the most fascinating gun cameras has always been the revolver cam. A small camera below the barrel of the gun would take a shot simultaneously as the bullet was fired. As a result, you’re left with a photograph of whatever you were shooting at. There’s something very Ray Bradbury about the whole thing. It’s different from simply attaching an action cam to a gun, which is common practice now. By linking the shutter to the trigger, the gun actually becomes the camera. Of course you could shoot photos without loading bullets into the chamber if you wanted your subject to stick around for future shoots.

Technically, there’s already a camera inside of a scanner so this might seem a little like it’s cheating. But, creative people have been hacking flat bed scanners to create unique imaging devices for a while, and the results can be pretty interesting. The video above shows how to make a more traditional camera out of a flat bed. Or, you can just try your hand at “scanography” which involves mashing your subject down onto the glass of the scanner and capturing images that way.

The eye-camera has become something of a science fiction trope over the years, but there have been a few individuals who have tried it. Canadian filmmaker Rob Spence, for instance, lost his eye in an accident and replaced it with a low-resolution video camera. The idea has been honed over the years and will likely one day be totally feasible. Not in the near future, of course, but until then it’s fun to daydream about adding things like optical zoom to your own eyeballs.

Working with a challenging material can be a source of great frustration, but if you manage to make something amazing, it makes the accomplishment that much more satisfying. The tedious process of turning an egg shell into a camera sounds daunting from the start, but with a little dedication and a rotary tool, it’s possible. One of the cool things about the Pin Egg project is that the shell isn’t just the camera, it’s also the film. The chemicals were applied directly to the inside of the shell where the final image actually resides. It’s a tricky process, but the results are awesome. And if you screw it up, at least you have 11 more chances in the box of eggs.{C}

Adding a camera to your eye is one thing, but using an old human skull to take pictures is a whole different level. Wayne Martin Belger is responsible for making some truly incredible one-off cameras that are works of art in and of themselves. His piece entitled “Third Eye” is made from a 150-year-old human skull with elements made from aluminum, titanium and gemstones. It exposes 4×5-inch negatives inside the skull through a hole in the forehead. You can see the resulting images at the artist’s site and they’re every bit as creepy as you’d expect them to be.

You can make pretty much anything out of Legos. In fact, if you look in the internet, you’ll find that someone somewhere has made, well, pretty much everything out of Legos already. But, the Lego camera had so much hype that it became something of a real product. For $40, you can get a working digital camera made from colorful plastic bricks. Of course, there is a whole heap of other examples of Lego cameras online, but it only seems right that you’d make your own.

Papercraft is capable of some truly interesting and impressive feats. The paper camera has been around for decades, but the instructions are now readily available thanks to the web. Building one is relatively simple. You download the templates, print them on thick cards stock and assemble the camera. The Dirkon is one of the most common examples and it’s so cool if executed properly. You can check out this link at Pinhole.cz for instructions and some sample images. Just be sure to keep it dry and give it lots of light as the F/130 aperture isn’t exactly speedy.

The Trashcam project was created when some clever German men realized they could make trash bins (the word Dumpster is actually a registered trademark referring to a specific brand of garbage container) into easily portable, very large pinhole cameras. They shared some of their amazing images on a Flickr page and captured the imagination of the internet. The final images have the heavy vignetting and ghostly sharpness for which pinhole photography is known. It’s such a good idea because the camera itself is both easily portable and infinitely inconspicuous, which is good when you need extra-long exposures.{C}

If a garbage container can be made into a camera, then it should be no surprise that the trash itself can be used to take photos as well. 20th century Czech artist Miroslav Tichy used items at his disposal, like thread spools and paper tubes, to create a camera that looks like it has spent some time at the bottom of the ocean. But, it worked. Appropriately, he allegedly developed some of his images in a bucket for lack of a dark room. It’s also said that people sometimes thought he was pretending to take photos because his camera looked so ludicrous. The images he created were extremely distinct and act as a nice reminder that we should appreciate just how awesome and convenient our normal cameras are.

The World’s Largest Photograph measures a massive 111-feet wide by 32-feet tall. In order to create such an enormous image, six photographers and 400 artists turned an F-18 airplane hangar in southern California into the largest camera ever made. There’s an entire book dedicated to documenting the process of making the image which required insane amounts of materials and person-hours to do the work. It was displayed at the culver Center of the Arts, but doesn’t make many appearances these days because of the sheer size.

I’m sure that there are a ton more out there that we’ve never seen, so feel free to share any other creative DIY cameras here in the comments. And don’t worry if they’re not made of a skull or anything weird like that. We can appreicate beautiful cameras just as much as we do the creepy ones.