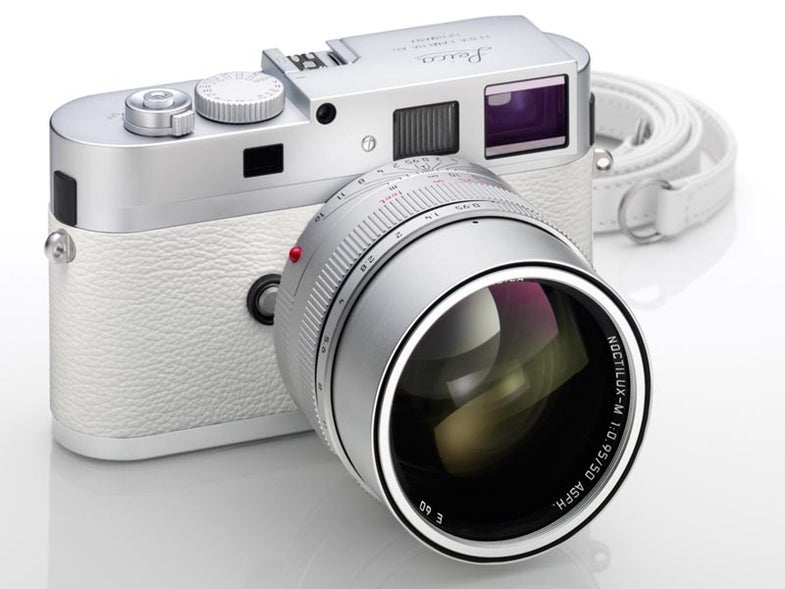 Most of us will never own a super-limited camera that costs as much as a decent car, but they’re sure fun to look at. The white Leica M9-P is set to launch in July, and will only be available in Japan. Released to commemorate the opening of Leica Daimaru Tokyo, the asking price will be 2,620,000 Yen ($31,600), and it’ll have a silver chrome upper, white lacquer finish, and “white paste box calf leather”. It also comes bundled with a special, silver version of the Nokuti M f0.95/50mm ASPH lens. The original M9-P currently goes for around $8,000, and was billed as being less obtrusive than the M9 because it lacked the large red Leica logo, an argument which doesn’t really gel with a large, bright-white camera. This isn’t the first incredibly expensive M9-P variant we’ve seen, and only 50 of this white kit will be made.

In the UK, the already exclusive black Fujifilm X100 has been made even more exclusive at high-end retailer Harrods. Just 16 of the 10,000 unit run of black X100s will be available this way, and will cost £1,795 ($2800). As with the rest of the black X100 limit editions, the Harrods version will come with the black camera, lens hood, adapter ring and protector filter, and bespoke black and red leather case — but will also have an exclusive Harrods presentation box and a letter of authenticity from Fujifilm UK. Black X100s elsewhere have an asking price of $1700, and a standard model will set you back around $1200.