Faster performance, video editing, and a new look are some of the upgraded features from CS5 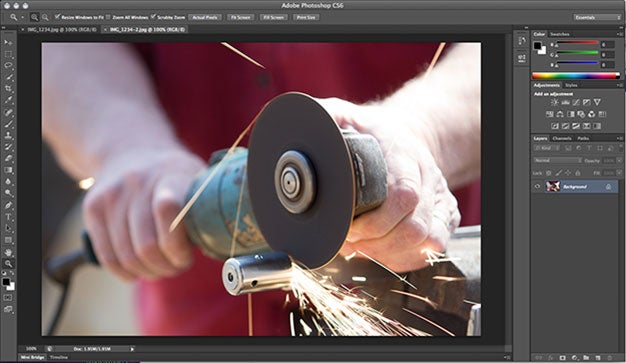 Lightroom 4 has been available for a couple weeks now, so Adobe has decided it’s time to give Photoshop CS6 the public beta treatment. The final release is slated for some time in the first half of this year, but if you’re willing to help Adobe test out a near-final version, you can mess around with it now for free. At least for a while.

The jump to CS6 isn’t a granular one. In fact, upon opening the program, you’ll notice that it has gotten a very new look. The UI has been darkened a bit in order to give you a more neutral workspace against which you can view your images. Of course, you can always switch if the new look isn’t for you, which is something Adobe seems to pride themselves on at almost every level, and rightfully so. With so many dedicated users having used their software for years, there’s always bound to be push back to change.

Some of the biggest improvements come in the arena of performance. I’ve been playing with the pre-release version for a few weeks now and there are some actions that happen noticeably faster. The liquify tool, for instance, has been substantially revamped so now your image loads almost immediately in the liquify interface. It often won’t load in tiles like you’re probably used to in previous version. Retouchers will likely be happy about that. This is all a product of some behind the scenes tweaking, which makes much better use of graphics processors. It’s worth noting, though, that some older machines (especially those running Windows XP) won’t be able to take advantage of the faster performance.

There’s still a clear focus on the Content-Aware technologies, adding the oft-requested Content-Aware Patch tool into the mix. As you may have seen in the “sneak peak” videos released in the past few weeks, it basically allows you to move entire objects around inside an image with striking simplicity.

Another big step forward is the revamping of video handling. While the video editing capabilities still aren’t quite as robust as you’ll find in motion-specific programs like Premiere, they do maintain a very Photoshop-like experience. In playing with it, I found the drag and drop style editing reminded me a bit of how I’d expect to interact with a touch-based app I’d find on a tablet. Certainly seems like a nice gateway for still photographers to start dabbling in video.

Back to the photography-specific features, Photoshop CS6 includes the latest Adobe Camera RAW processing module (pictured above), which makes editing RAW files more like the experience you’ll get in Lightroom 4.

Adobe has also made a pretty big step forward in the arena of automatic image correction. I know, it’s a badge of dishonor in many circles to even think about hitting that “auto” button, but they have realized that it can be a good starting point and they have capitalized on that. Letting Photoshop do a little bit of the editing for you now isn’t as scary as it once was, especially if you’re just doing quick edits.

The Adaptive Wide Angle correction is a nice addition for people who regularly shoot ultra-wide photos, especially if you’re using a lens that doesn’t have a reliable lens profile for correcting distortion. Of course, it can’t fully fight off your wacky edges, but it can make your subject look less distorted and that’s an improvement most of the time.

The new lens blur features are also nice additions. The Iris Blur utility lets you mimic shallower depth of field by assigning different points in an image different blur values. It’s not going to turn your camera into a Lytro Light Field Camera, but it can be effective if used responsibly. The tilt-shift simulation is also pretty good if you’re willing to do some tweaking. Still, it’s a bit quicker than the old way of faking it, and the effect renders immediately.

So far, I’ve found the Beta to be very solid, but with any beta, you’re better off not using it for work that’s absolutely crucial. You never know when a bug is going to hit. But, if you have the hard drive space and your computer can handle the performance requirements, there’s no reason not to give it a run. At least you’ll find out whether or not you’re a fan of the new dark UI.

Here’s the Adobe blog post with more info, or if you want to skip all that and go straight to the downloading, you can find that here.