An up-close look at an intriguing little camera 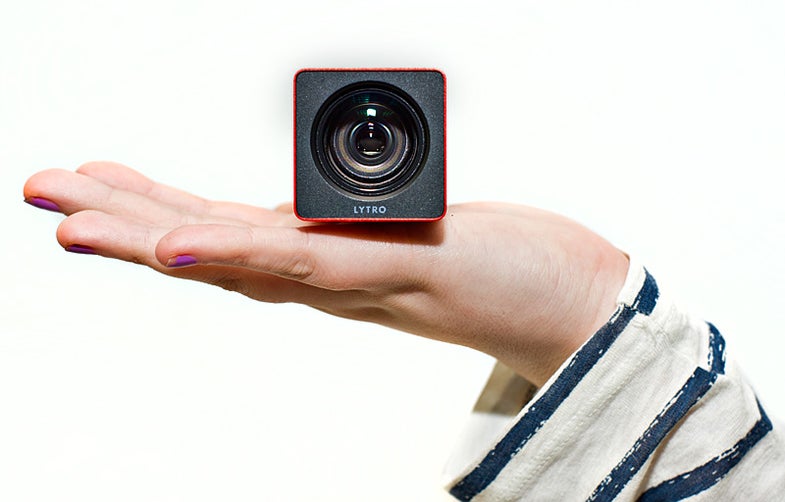 With all the hype surrounding the new Lytro light-field camera, you’d think they completely reinvented photography. Some might want to argue that they did. We wouldn’t go that far, but we can say that it’s a major change to the way images are captured.

For those unfamiliar with the light-field (aka plenoptic) concept, here’s a very simplified explanation. By placing a specialized array of micro lenses on top of anotherwise typical image sensor, the Lytro can capture a scene from multiple perspectives. Later, you can go back and change where themain focus point is placed. Eventually, you’ll also be able to change the amount ofthe scene that is in focus (aka the depth of field) and create a 3D image from a single capture.

Like anything, the technology also has some downsides. The main drawback is that the pixel count of the final image is only a fraction of what we’ve come to expect out of more traditional cameras. In the case of Lytro’s current product, you’ll get images that are 1080×1080- pixels– a little over 1MP. It won’t make for a very impressive print, but it’s fine for posting online.

Lytro makes sharing fairly simple. When you plug the camera into your computer for the first time, the computer will prompt you to install the Lytro software. So far, the software only works on MacOS version 10.6.6 or higher, though Lytro plans to release a windows version sometime this year. Once the software is installed, any new images will be downloaded the next time you connect the camera to your computer. There is no card slot, so you’re stuck with the 8GB ($399) or 16GB ($499) that’s built into the camera. However, at 16MB per picture, you can fit a reasonable amount in the memory. According to Lytro, the 16GB can hold up to 750 pictures, while the 8GB should store up to 350 pictures.

The camera has an 8X optical zoom lens in it with a constant maximum aperture of f/2. The company hasn’t disclosed what the equivalent focal lengths are for the lens, though in our field testing so far, we’ve seen that it’s a convenient range for everyday shooting and provides a longer zoom than we would’ve expected. The camera’s close focusing capabilities are quite impressive. You can practically rest the camera on the subject at an angle and get a usable shot and then refocus to different parts of that super-macro shot.

Most of the time you see people write about these types of cameras, you get the impression that capturing a good light-field image is as simple as pointing it at something and pressing the shutter button. This is far from the truth. In our field testing to date, we’ve shot over 150 images and came away with about 11 that we liked.

To get a decent light-field image from this iteration of the Lytro camera, you really have to pay attention to placing subjects at varying depths from the camera. Those depths should be clearly definable and exaggerated if you want the refocusing effect to be noticeable on playback. This was easiest when we were shooting extreme close ups, though an image of a squirrel shot with the camera zoomed to 8X had an impressive amount of refocusing capability.

The most frustrating thing about the Lytro is that it doesn’t offer much control at all. There’s a strip of touch sensitive rubber on top of the camera for zooming during playback or capture. Other than that, there’s just the shutter button on top of the camera, power button on the bottom, and the touch screen on back. That touch screen is a small 1.46-inch LCD screen that was challenging, at times, to use. The off- axis viewing is not all that good, so framing a shot when the camera isn’t directly in front of your face can be challenging.

With practice we did get better at shooting with the Lytro, and despite some frustration, it was a fun photo experience overall. When reviewing the images though, the current product package feels a bit like a one trick pony. Lytro has not unlocked any capabilities other than the ability to select what you’ve focused on after the image is shot. They say that they plan, sometime this year, to release 3D capabilities, as well as “infinite” depth of field to maximize the sharp elements in the image. Until they do expand what you can do with the Lytro, it really doesn’t feel worth the high price tag.

That said, people are still excited about this camera. We had one person approach us during our field test to tell us that she is excited to get one even though she doesn’t know how well it works. Others gave puzzled looks and asked us what “that thing” is. If you’ve got the early adopter mindset, and the spare cash, and don’t mind waiting around for features, then you might have fun with this camera. For most people, though, it probably wouldn’t hurt to wait a little.

CLICK THROUGH THE REST OF THE PAGES FOR MORE SAMPLE IMAGES