This Japanese patent would give you 3D images, but demand you shoot in profile orientation 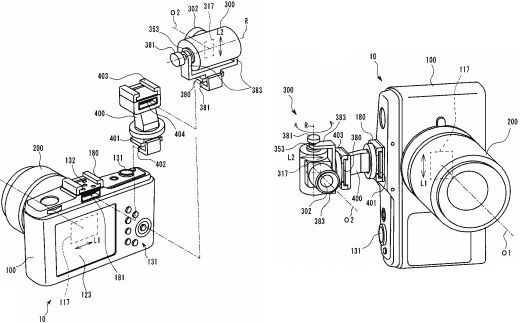 A patent recently filed by Olympus presents an interesting way of bringing 3D photography to their ILC cameras — by adding a second lens to the hotshoe. As you can see from the patent illustrations above, it would sit in the camera’s hotshoe mount, and provide a second lens for stereoscopic shooting. Sounds intriguing, but doesn’t take much to envision some of the problems it might have. For one, you’d be stuck shooting portrait orientation, or else the parallax effect will be vertical instead of horizontal. The other obvious difficulty would be the difference between the two lenses. Would this rig work with any lens on the main mount? Or only a specific one? What if the two lenses have different focal lengths and apertures? How is the second lens controlled? Is there a servo to automatically choose the correct angle it should be facing? Does it have its own sensor? As is so often the case, the devil is in the details.

Panasonic got around most of these issues for their own take on 3D for Micro Four Thirds, the 12.5mm f/12 3D G Lens. With two lenses combined into a single unit, it had a fixed aperture and focal length to avoid any problems. However, user reviews have not been kind, claiming the 3D effect is poor due to the lenses being close together, and that the fixed f/12 aperture is only useful in the brightest of conditions.

This isn’t the only approach to 3D we’ve seen from Olympus. A number of their compact cameras have a feature called “3D Mode”, whereby you take a photograph from one angle, and then it gives you an overlay to shoot a second perfectly, combining the two into a single 3D image.

We’ll wait to see if Olympus actually brings this concept to market, or if this is just a patent for its own sake. It could be a very interesting product, but the potential problems are multitudinous.