A new Ricoh GXR unit should land next year, and bring a large APS-C sensor to the modular camera. 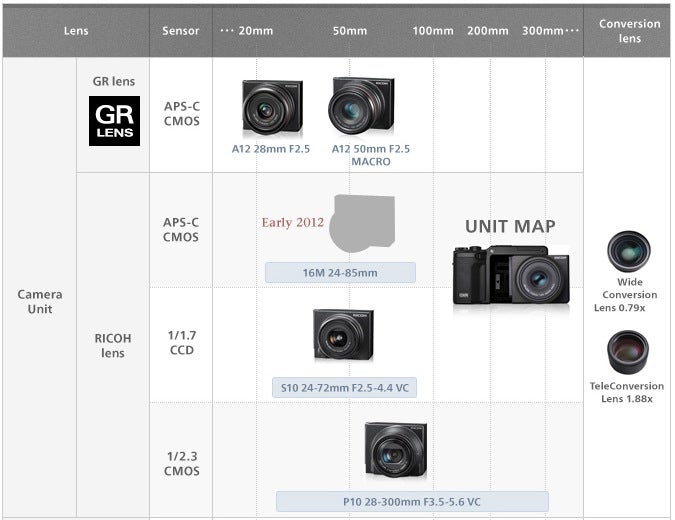 Ricoh’s Japanese site has supplied the barest bones of information about the next sensor/lens combo for the modular GXR. Set to launch in Japan in early 2012, it has a large APS-C sensor, will shoot 16-megapixel stills, and have a 24-85mm equivalent lens. This is the first APS-C sensor unit for the camera that has a zoom lens, though there were two primes previously released, a 28mm and 50mm. Ricoh also released an APS-C sensor unit earlier this year with a Leica lens mount, and two zoom/sensor combos in 2010, the 1/1.7-inch 24-72mm S10 and 1/2.3-inch 28-300mm P10.

We don’t know how much the new unit will cost, but given that the S10 has a street price of just over $300, and the extant APS-C units cost $649, I we assume it’ll be more the latter than the former. This is the highest resolution of any of the sensor/lens combos for the GXR, so it’ll be interesting to see how it performs and what sensor they’ve opted to use. A lot will also ride on the size of the lens, and its aperture range.