Test: Ricoh GXR With A12 and S10 Camera Units

Meet the camera with interchangeable...cameras 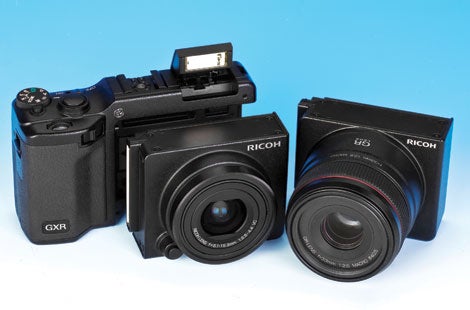 That overused adjective “unique” finds a wholly appropriate partner in the Ricoh GXR, which turns the concept of the interchangeable-lens compact (ILC) on its head. Unlike ILC cameras from Olympus, Panasonic, Samsung, and Sony, the GXR employs interchangeable camera modules, each housing its own lens, imaging sensor, and processing engine.

Typical of Ricoh’s compact cameras, the GXR body feels more solid than the usual compact. It and the camera modules have magnesium-alloy chassis similar to what you’d find in many DSLRs. The rails used to slide the body and modules together are made of stainless steel that has gone through a soft-nitriding process to make them less prone to scuffing and more resistant to corrosion. The connector is unlike any we’ve seen on camera equipment, and the modules exchanged flawlessly in our field tests. One of our testers managed to misalign the rails on the first attempt to attach a module, but had no further trouble afterwards.

Also typical of Ricoh compacts, you’ll find more than the usual complement of customizable buttons, along with very utilitarian menus. The typeface is on the small side, but we like the look of these menus.

The Direct menu, located on the left of the camera body, gives you quick access to the most commonly changed settings, such as ISO, white balance, and AF mode. Want to control these with your right hand? You can assign any of them (up to four) to the ADJ rocker switch, which you can also push inward to make selections or activate its custom menu. We found this switch, located right next to your thumb, more convenient to use than the menu in field testing.

The controls in the Direct menu can also be assigned to one of the two custom function buttons on the eight-way control pad, also on the right side of the camera. Not only does the 3-inch, 920,000-dot LCD have impressive resolution, Ricoh says it recreates the entire sRGB color gamut, again something you won’t fi nd on most compacts and a boon to those who plan to use their images online. There are three choices for grid overlays: A Rule of Thirds grid divides the screen into nine areas, and another adds horizontal, vertical, and diagonal center lines to the Rule of Thirds grid. A third option puts framing corners where the Rule of Thirds lines would intersect, plus hash lines indicating the centers of each side of the frame. Though out of the ordinary, the third option provided the most usefulness for the least amount of clutter, while the second option proved overly distracting.

If the horizon lines in your landscapes are often askew, you’ll like the tilt indicator. Little bars let you know how much your camera is tilted to one side or the other and lights up green if you’re level and orange or red if you’re not. It can also be set to beep intermittently when the camera is level, though we expect this would become annoying after a while.

For those times when you’ll know the distance you’d like the camera to focus to, such as when shooting a speaker at a podium, you can set the GXR to focus to certain preset distances. Among the choices is infinity, which is useful for landscapes.

Don’t be fooled into thinking that the GXR’s nifty features stop once you take the picture. The playback screen can display up to 81 images at a time on its LCD screen, and the camera will let you delete multiple images at a time, selected individually or in one long range.

There are also a handful of fixes you can apply to images in the camera, such as cropping, resizing, white balance adjustments, and levels adjustments. That last one works like the Levels adjustment in Adobe Photoshop, showing you a histogram while you make your changes. There’s also something Ricoh calls skew correction that you can use to compensate for distortion due to perspective. This should prove useful for architectural shooters.

The features we’ve described so far apply to whichever module you use with the GXR body. Now we’ll take a look at the two camera units we tested.

S10 Wide-to-Tele Unit
A sensible entry point into the GXR system, at 24–72mm (fullframe equivalent) the S10 covers a versatile range of focal lengths, while its maximum aperture range of f/2.5–4.4 makes it faster than most DSLR kit lenses.

But unlike DSLRs, and the newest ILCs from Samsung and Sony, the S10’s 10MP CCD sensor is a small 1/1.7-inch type, similar to the size used in many compact cameras. The APS-C sensors used in most consumer-level DSLRs have more than 8.5 times the surface area of this one.

The difference really showed when it came to noise performance, where the S10 scored an unimpressive Moderately Low rating at ISO 100, increased to a Moderate rating at ISO 200, and ranged well into Unacceptable from ISO 400 through its top sensitivity of ISO 3200. This is on par with most compact cameras, but compared with ILCs it comes up short—all Micro Four Thirds cameras to date have scored acceptable noise results through at least ISO 800. For more detailed ILC test results, see our Shoot-Out.

In our resolution test, the S10 turned in average results for a 10MP camera with 1850 lines per picture height. Color accuracy scored an Excellent rating with an average Delta E of 6.7 from RAW files converted to TIFFs using Ricoh’s Irodio software (included).

Outside of all the controls and capabilities of the GXR system, what sets the S10 apart from most compacts is its ability to shoot RAW files. Midlevel and advanced shooters will thus find the GXR more to their liking, particularly in postprocessing. While most RAW shooters will be less than enthusiastic about the unintuitive Windows- only Irodio software, Photoshop users can always opt for Adobe Camera Raw, as the Ricoh uses Adobe’s DNG file format for RAW capture.

In the field, the S10 module handles much like a compact. While autofocus speed is on par with Micro Four Thirds cameras from Olympus—quick compared with most compacts—it’s still slower to lock on than a DSLR.

We were impressed, though, by its ability to track a subject moving toward or away from the camera. Once it locked focus for the first shot (we highly recommend prefocusing), the S10 was able to hold focus as the subject moved.

Taken on its own, the S10 doesn’t significantly outperform a compact camera. Many compacts have greater zoom ranges, are just as sharp, and give you similar noise performance—though they tend not to have color reproduction this accurate, and very few of them capture RAW.

The S10’s biggest benefit comes from being a part of the GXR system, with more advanced controls than most compacts, a nice LCD screen, and more solid construction. So if you like the luxury of the GXR feel, then the S10 kit could make sense.

A12 Prime Macro
Of course, the other advantage to the GXR system is your ability to switch out the lens, sensor, and processing in a group. With the A12’s 12.3MP APS-C-sized sensor, this represents a serious upgrade over the S10. Resolution increases to 2075 lines in our test, and noise remained in the acceptable range through ISO 800. Color accuracy scored Excellent, with an average Delta E of 6.98.

Autofocusing could be tricky. In the macro range, the A12 behaves as many DSLR macro lenses do—hunting and sometimes failing to achieve focus. We can’t really knock Ricoh for this, as the problem is pretty much endemic to macro AF, and the company deserves some credit for limiting the focusing range with the lens in macro mode. Ultimately, though, we found it better just to use manual focus in macro. Ricoh makes this easier with the A12 by including a focusing ring on the lens. But, as with Four Thirds lenses, the ring doesn’t physically engage the focus mechanism—instead it activates electronic control of the focusing motor.

In this case, the actual focusing is rather slow, which can be annoying if you have to move it far. But you do get finer control of focus placement—important when shooting in the macro range. We just wish there was more tactile feedback in the ring, and the ability to speed up the focusing.

Equivalent to the 50mm field of view of a 35mm camera, the A12 can be used as a normal prime at non-macro focusing distances. While the AF may still hunt at normal distances, typically it finds focus in a reasonable amount of time.

Plus, set to continuous AF, once the system locks on, it does a surprisingly good job of tracking the subject. As with the S10, we suggest prefocusing when tracking.

Outside of the focusing quirks, we enjoyed the A12 module, maybe even more than the S10. As with normal DSLR lenses, it proves more versatile than you might at first think.

The GXr System
Overall, Ricoh’s GXR system is off to a decent start. Like most of Ricoh’s cameras, it stands apart from typical compacts by offering a thoughtful alternative to the usual control schemes—customizable to your liking and geared toward photographers who know a thing or two—or plan to learn. For now, it remains to be seen what modules Ricoh will offer in the long run other than the 28–300mm f/3.5–5.6 unit, which uses a small 1/2.3- inch CMOS sensor typical of compact cameras. We’re hoping for something wide and fast enough for street shooting.