Decades before the 1D X came around, Canon had a 14-FPS SLR in the F-1 High Speed Motor Drive 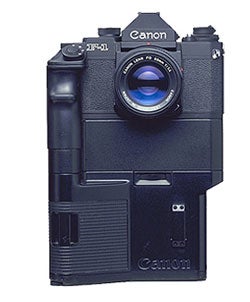 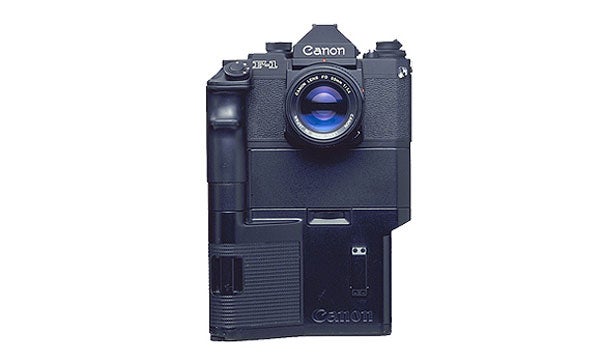 If you’re willing to lock up the mirror, Canon’s beastly new EOS 1D X DSLR can crank out 14 full-resolution images in just a single second. Impressive to be sure. But, there was another Canon camera that could match that frame rate and it debuted almost 30 years ago.

The F-1 High Speed Motor Drive came out in 1984, mostly for use at the Winter Olympics. The F-1 body had to have two relatively huge battery packs attached to the bottom in order to achieve that 14 FPS mark, but when it was going at a full clip, it would eat up a 36-exposure roll of film in just 2.57 seconds.

Canon actually had to work some magic in order to reach that number, especially back then. The lens, for instance, had to remain stopped down throughout the entire burst because the older lenses couldn’t open and close fast enough for that kind of frame rate. They also equipped it with a fixed, translucent pellicle mirror, much like the one currently being used by Sony in their speedy A-series DSLRs.

Those big add-ons are filled with batteries needed to supply all the power needed to push such a fast frame rate. Each pack holds 20 AA-sized Ni-Cd cells. Even today pushing that FPS number takes a lot of power. In fact, once the new 1D X’s battery gets below 50%, it can no longer make it to 12-FPS with servo AF.

It was only available to press photographers when it was released, but every now and then you can come across one on eBay. At the time of writing, there’s one for sale and it’s $11,450.

If you’re a Nikon user, you could always try and find an old Nikon F3H, which was designed for use at the 1998 Olympic games and capable of speeds up to 13.5 fps using a similar pellicle mirror. We haven’t seen one on eBay in a while, though, and when they do they’re not cheap. That’s especially true when you consider how much film you’re going to need to buy to feed these things.