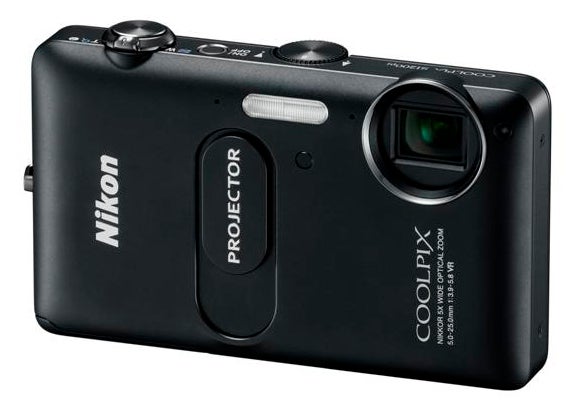 If the Coolpix line-up is looking particularly fresh this evening, it’s because there are new cameras to be had all around (including the new flagship P7100 and the un-killable AW100). Even their projector-toting camera has gotten a bit of a facelift. Here’s the rundown.

S1200pj
Nikon pleasantly surprised everyone when it first introduced the S1100pj, a quirky little compact that could throw images as well as capture them. While virtually nothing has changed on the photography side, the projector has gotten an overhaul.

The biggest selling point is it’s ability to connect to one’s iPad, iPhone or iPod, via a supplied cord. It will project saved content such as movies, TV shows and images, up to 60-inches wide.

However, what good would this ability be without an increase in projector power? While the S1100pj offered a 14-lumen lamp, the S1200pj offers a 20-lumen lamp. It’s not enough for a midday movie screening in the park, but it’s more than enough for showing off photos and videos to family, or better yet, clients.

As before, you get 720p HD video capture, a 14MP CCD sensor and 5x optical zoom range. It will be available in September for $429.95 in either black or pink.

Other tweaks include the ability to zoom during video capture, which, by the way, is still an impressive 1080p. Nikon also increased its high-speed burst from 5 fps to 6fps.

And while its video capture capabilities (720p), and 16MP CCD sensor stayed the same, the S6200 did receive a downgrade in LCD size, from 3-inch to 2.7-inch, mainly due to an overall body-size and weight reduction.

While the updated S100 keeps the same 3.5-inch touch OLED touch screen, Nikon did tweak out the core components of this compact in similar fashion to the S8200.

Other new features include a 2D to 3D still conversion function, that essentially works by taking a second shot and mashing it with one’s original image for a stereo effect.

Available in September, you can pick up an S100 compact for $299.95 in your choice of red, black purple and gold.