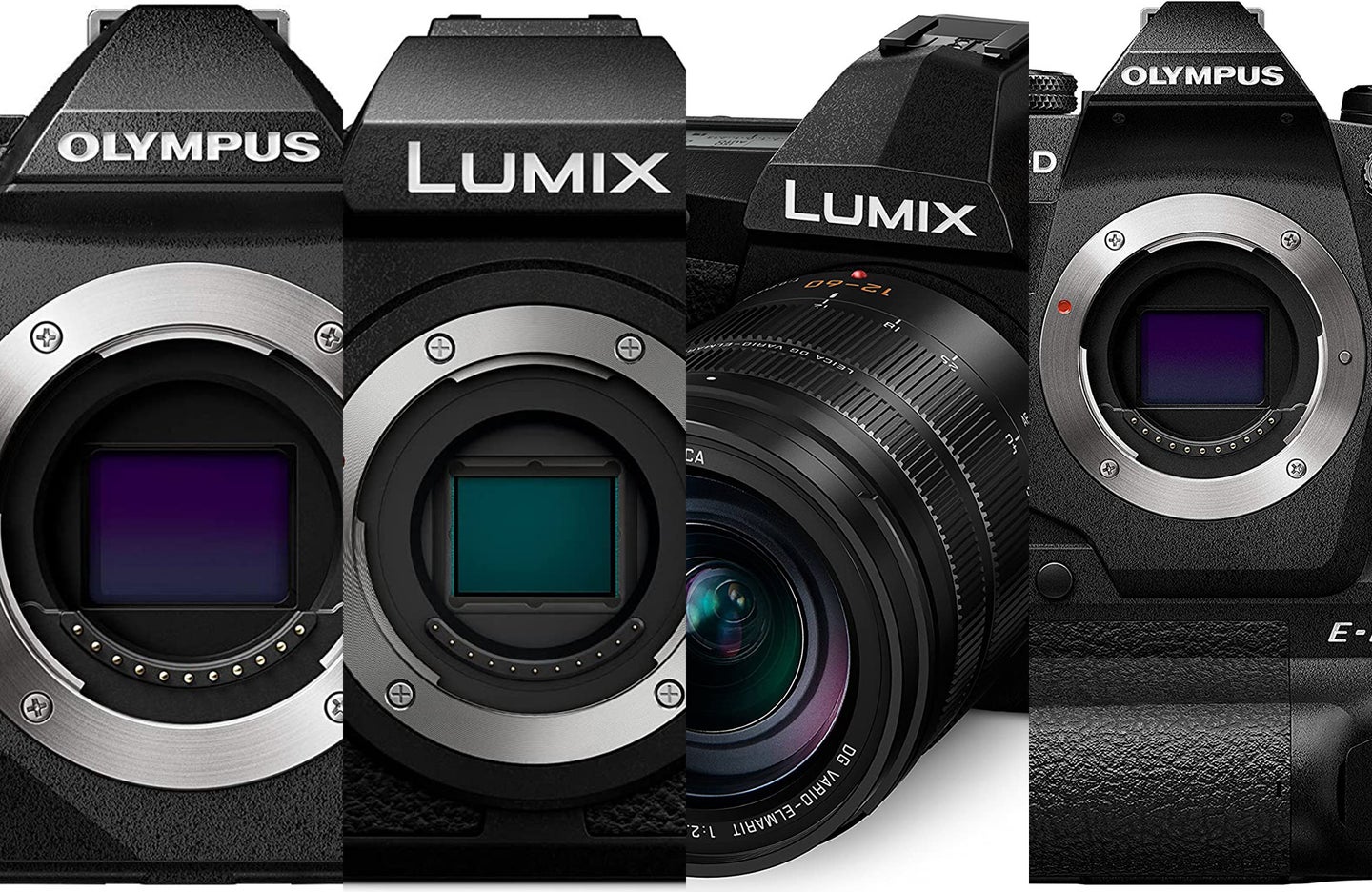 These lightweight cameras are a great choice when you are looking to reduce bulk.

Micro Four Thirds cameras were originally introduced as a lightweight alternative to the bulky DSLR. These interchangeable lens cameras typically have a lower price point, excellent video specs, and beautiful EVF. And because they are built around a smaller sensor, manufacturers can keep bodies and lenses much smaller. In this buying guide, we will explore some of the best Micro Four Thirds cameras that are currently on the market.

This versatile camera excels in a wide variety of shooting situations and doesn’t skimp on video features.

This well-rounded Micro Four Thirds camera is an excellent choice for stills shooters while still featuring ample video specs. It has excellent image stabilization and image quality, can shoot 4K video, and has an extremely well-built body that is comfortable to use. The face and eye detect mode works well and is extremely useful when shooting portraits, while features like Starry Sky AF are useful for simplifying the tricky practice of astrophotography.

When used in High Res mode, this little camera can pump out 80-megapixel RAW files by combining multiple frames worth of image data. It has burst speeds of 10 fps when using the mechanical shutter and up to 18 fps using the electronic shutter. All of this packs into an extremely lightweight body, making this an excellent option for the photographer who likes to travel light.

The Lumix DC-GH6 offers a wide range of codecs and bit-rates, making it an excellent compact solution for small-budget video projects.

The Lumix DC-GH6 is a flexible and highly dependable Micro Four Thirds camera for video shooters looking for something lightweight and affordable. The GH line has a long history as an excellent camera for shooting high-end video on a budget.

The GH6 offers a built-in cooling system and advanced audio controls, which make it especially appealing for shooting motion. It can adapt to a wide range of shooting scenarios, and it’s easy to access features that videographers might need to change on the fly. It includes high-end features that you typically only find in a cinema camera, like ProRes recording, waveforms, and vector scopes, but packaged inside a much smaller body for a fraction of the price. We wouldn’t recommend this camera for stills shooters, but it’s a great tool for video shooters.

This sports-oriented Micro Four Thirds camera features dual grips and can shoot continuously for up to 60 fps.

Olympus built its OM-D E-M1X for speed. This sports-oriented camera is the only Micro Four Thirds body that features dual grips. It has 121 hybrid AF points, can shoot up to 60fps in AF/AE lock mode and up to 18fps with continuous AF/AE. Pro Capture mode lets you save images that were taken before the shutter release button. The built-in dual grip holds two batteries and the camera features 5-axis image stabilization—a must-have when shooting fast moving subjects. Although it’s primarily aimed at sports shooters, features like bird detection AF make it a great tool for shooting wildlife as well.

The Panasonic Lumix DC-G9 has a lightweight magnesium body that is capable for shooting stills or video.

Panasonic’s Lumix DC-G9 is a lightweight Micro Four Thirds camera that is a versatile tool for shooting stills or video. It has 6.5 stops of image stabilization and can shoot continuously at 60fps with Single AF and 20fps in Continuous AF. When used in high resolution mode this camera can produce 80-megapixel stills. It has dual SD card slots, 4K video capabilities, and even captures 6K stills. The Top Plate LCD is unique for cameras of this size and of the largest EVF available on a Micro Four Thirds camera. This is a great choice if you are looking for a true hybrid camera for shooting stills and video.

Why It Made The Cut:

This entry-level Micro Four Thirds camera is an excellent and budget-friendly choice for the photographer who is just getting started.

This entry-level Micro Four Thirds camera from Olympus lacks some of the higher-end features found in the other cameras in this buying guide but does come with a much more affordable price tag.  The Olympus OM-D E-M10 has built-in modes for beginners to help them learn as they go, 4K video capabilities, and in-body image stabilization—which is great for shooting handheld video or in low light. The flip down LCD screen is great for selfies, although it can’t be used if the camera is attached to a tripod. It can shoot bursts up to 15fps and can be charged via USB. This lightweight camera is a great choice for travel or capturing candids with the family.

Made by Panasonic and Olympus, Micro Four Thirds cameras were originally designed to be less-bulky alternatives to the DSLR. They are built around a smaller sensor, which means their bodies and lenses also tend to be more lightweight than a full-frame camera. Although many photographers have switched to mirrorless cameras to replace large DSLRs, there are some shooters who simply prefer using a Micro Four Thirds camera for their shooting needs.

Generally speaking, a Micro Four Thirds camera will be less expensive than a high-end mirrorless camera, which is one of the reasons that this type of camera remains popular. They also tend to have really good video specs—even in entry-level models. Because the sensor is smaller, they’re typically not as good in low light scenarios and have limited dynamic range capabilities compared to full frame cameras. For many shooters, a Micro Four Thirds camera is a nice step up from a compact camera—making them ideal tools for travel or capturing friends and family on something more substantial than your smartphone.

Because Micro Four Thirds sensors are smaller than their APS-C and full-frame counterparts, they simply have less room for pixels. You’ll typically find Micro Four Thirds bodies in the 20-megapixel range. That may seem somewhat paltry compared to the high-megapixel offerings out there, but it’s actually a solid middle ground. It’s still enough pixels for big prints and other high-demand functions, but the smaller image files enable faster burst rates and take up less space on cards and hard drives.

Many Micro Four Thirds bodies lend themselves to video capture with their features. They typically include advanced in-body image stabilization, and the small form factor fits easily into rigs and other cinema settings. The Panasonic GH6 is particularly adept when it comes to video capture as it offers several high-end modes that exceed the capabilities of its larger–sensor competition.

While many Micro Four Thirds bodies employ a DSLR-style body, you do have options. The Olympus PEN series cameras, for instance, embody a rangefinder–like design that benefits from the small lenses.

Q: Is a Micro Four Thirds good for photography?

Although a full-frame camera will be able to operate at higher ISOs and be better in low lighting scenarios, a Micro Four Thirds camera is still an excellent option for a wide variety of styles of photography. They can be excellent travel cameras in particular because of their lightweight build and compact body and lenses.

Buying a refurbished Micro Four Thirds camera is a great way to save a little money on your gear. Refurbished cameras refer to cameras that have been gently used and then checked by hand, carefully inspected, and recalibrated for resale. Although they are technically “pre-owned,” the amount of use that they’ve seen is typically so minimal that most folks wouldn’t even notice.

Ultimately you should consider how you will be using the camera when buying a Micro Four Thirds camera. Although this style of camera tends to have amazing video specs, some models aren’t as great for shooting stills. Micro Four Thirds cameras tend to be less expensive than mirrorless models, but we’d recommend comparing specs across brands before making a purchase. Micro Four Thirds cameras are certainly a light-weight alternative to a DSLR and a step up from a compact point and shoot, but they will typically not perform as well in low-light scenarios or produce images with impressive dynamic range when compared to a full-frame mirrorless counterpart.

Methodology: How we selected the best Micro Four Thirds cameras

Products were selected through a combination of hands-on experience, editorial reviews, and user feedback.