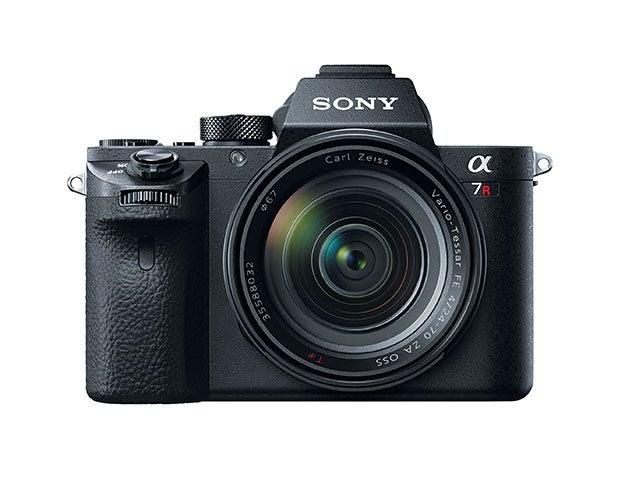 When Sony first announced the original Alpha 7R, our 2013 Camera of the Year, its 36.4MP full-frame sensor had the most pixels ever used in the Alpha line. Now, while Canon holds the title for the most pixels on a full-frame 35mm sensor with its 50.6MP EOS 5Ds, Sony has upped its game to 42.4MP in the A7R II.

Naturally, it wouldn’t be like Sony to stop there. This model also sports the first full-frame back-side illuminated (BSI) sensor in a consumer camera. By putting the sensor’s circuitry on the back, there’s more room for the photodiodes that collect the light, and potentially less noise at higher ISOs. With sensitivity settings up to ISO 102,400, the A7R II ($3,198, street, body only) aims to push that potential as far as it can.

One of the biggest complaints about the original A7R was the vibration caused by the shutter mechanism. Sony redesigned it for the A7R II and added an option called Silent Shutter that eschews the mechanical shutter altogether for a vibration-free capture. This assumes that you have your camera mounted on a tripod, are triggering it through the built-in Wi-Fi, and that whatever you have the tripod placed on is free of any vibration.

Shooting handheld or on a tripod on a shaky floor? The A7R II also has the same five-axis image stabilization system that Sony includes in the A7 II and the just-announced A7S II. Another improvement: The camera’s new image sensor-based autofocus system boasts 399 embedded phase-detection points and claims to be 40 percent faster than the one in the A7R.

As super cameras go, this one looks super-duper on paper. That’s why we ran it through the Popular Photography Test Lab and took it out in the field to see how it measures up to the other cameras we’ve put to the test.

In the Test Lab With oodles of pixels, accurate colors, and well-controlled noise at lower ISOs, the Sony A7R II easily earned an Excellent rating in overall image quality from ISO 50 through ISO 800 in our lab tests. The camera barely achieved an Excellent rating in color accuracy with an average Delta E of 7.9 that puts it just below our cutoff of 8 in this test (lower scores here are better).

While we expected that Canon’s 5Ds would beat this Sony in our resolution test, thanks to the EOS sensor’s extra pixels, it did so only by 180 lines. The A7R II captured 4000 lines per picture height at ISO 50. In the case of both cameras, we ran the test using the mechanical shutters. As we always do with DSLRs, the Canon was in mirror lock-up mode to avoid vibration due to mirror slap. Sony’s A7R II, a mirrorless interchangeable-lens compact (ILC), didn’t need such accommodation, of course.

When setting out to process the test images from the A7R II, we faced a bit of a quandary. Sure, the camera ships with Sony’s Image Data Converter software, and we usually test RAW files converted to TIFFs using the software that comes with the camera. But Phase One has also been offering a free version of its Capture One software for Sony users. After processing our files with both of these programs, we found that Capture One (for Sony) offered a better balance of controlling noise while maintaining resolution, so the results presented here are what we got using Capture One.

The A7R II earned top honors with an Extremely Low rating in our noise test from ISO 50 through 200. The same can be said for Canon’s 5Ds. The Sony earned Very Low ratings at ISO 400 and 800, again matching the Canon. However, the 5Ds scored a Low rating for noise at ISO 1600, while the Sony jumped up to Moderately Low (slightly noisier) at that setting. This explains why the range of Canon’s Excellent overall rating extends to ISO 1600 while the Sony’s extends only as far as ISO 800. Both cameras reach an Unacceptable rating at ISO 6400 and beyond, though the Canon proved a tad less noisy at ISO 12,800, perhaps contributing some to the disparity between the two camera’s resolution scores at that sensitivity. The Sony does manage to keep noise relatively tame at ISO 25,600, after which noise really picks up.

In our image stabilization test, the A7R II did quite well. Our testers were able to get an average of 3.3 stops of shutter speed advantage while shooting handheld with the 70–200mm f/4 Sony G OSS lens mounted to the A7R II and racked out to 200mm. In this configuration, the lens handles the pitch and yaw adjustments, while the sensor shifts to adjust for roll as well as movement on the X and Y-axis. Performance may vary if you use a lens that doesn’t have optical stabilization, as this may restrict the number of axes available for stabilization. You’ll still get some benefit though, even when you are using legacy glass mounted with an adapter. If you’re using a lens that can’t communicate with the camera body, you will have to enter the focal length manually through the menu system in order to get the best result possible.

In the Field With a design that’s very similar to the A7 II tested in our March 2015 issue, the A7R II keeps up with the advances Sony has made to the look and usability of the whole A7 line. The shutter button moved forward a bit and is more ergonomically angled compared to the original A7R. The grip as a whole has been improved significantly over its predecessor, with a more sculpted design with better ergonomics overall. The OLED electronic finder has revised optics and checks in with a magnification of 0.78X, up from 0.71X, for a more immersive shooting experience.

Dual command wheels make manual shooting easier than it is in most entry-level DSLRs and ILCs. As with the A7 II, the A7R II has an ample supply of assignable control buttons and the function menu (accessed by the Fn button) gives you quick access to whatever commonly changed settings you haven’t assigned to a button. The only hiccup we found happened when we wanted to enable or disable SteadyShot (Sony’s term for image stabilization) while using a lens that doesn’t have a dedicated switch for it on the lens barrel. The setting is buried in the camera’s menu on page 8 of the first menu tab. It seems particularly strange given that the first page of the menu includes the settings for panorama size and direction, both of which are grayed out unless you’re using the panorama shooting mode. It’s a relatively minor gripe, but it did slow us down a bit.

Burst shooters who want extremely fast continuous drive might want to look toward a camera with fewer pixels, though the A7R II does offer 5 frame-per-second capture with full AF and metering. That’s where we usually draw the cutoff for sports shooting, though you can find a lot of cameras with faster bursts than this one has. The buffer depth isn’t amazing, though given the file sizes involved, we were impressed that you can shoot up to 30 large, fine JPEGs, or up to 23 RAW frames before the camera slows. By the way, if you don’t mind dealing with even larger files, Sony recently announced that it will offer 14-bit uncompressed RAW capture, available through a firmware update; at press time, the camera compressed its RAW files to take up less space.

Autofocus proved plenty fast with the A7R II. There’s a noticeable improvement over its predecessor and you can even get phase-detection AF when using a Metabones adapter and a Canon lens. Shooting in very dim light conditions, you’ll definitely notice slower AF, and this still may be a distinct advantage of the Canon 5Ds when comparing these two high-resolution cameras. Of course, the Sony will likely be taken into more low-light situations thanks to it offering more high-ISO options.

AF tracking proved formidable. Sony flew a bunch of tech journalists out to Portland, Oregon, for our first experiences with the A7R II. On that trip, we were able to track along with skateboarders on a mini ramp. When in tracking mode, the camera overlays the active AF points on the subject it is following. This was a good indicator that it was maintaining the tracking and helped ease our mind while shooting.

Video shooters have a lot of options with the A7R II. You can capture at up to 3840×2160 at 30 fps in the XAVC S format at up to 100Mbps. You can also capture in the AVCHD format, though that tops out at 1920×1080 at 60 fps and 28 Mbps. All the video we captured looked very nice, with plenty of detail for the given format. Video geeks will appreciate that you can select a picture profile that lets you record using the S-Log2 gamma curve to get the best dynamic range you can when capturing video with the A7R II.

The Bottom Line The idea that Sony has been able to create a full-frame camera this small, with sensor-shift stabilization and a BSI sensor, is somewhat mind boggling. It wasn’t that long ago that the company launched the first NEX line. The FE line of lenses still has plenty of room for growth, but as Sony continues to build it out and third-party manufacturers get involved, the list of lenses available for the A7R II is growing relatively rapidly. Furthermore, Sony’s LA-EA3 or LA-EA4 mount adapters let you use any A-mount glass with the camera, and through third-party adapters you can mount a vast array of glass from other systems on the A7R II.

When it comes to absolute resolution in the 35mm (full-frame) sensor format, this Sony still trails the Canon EOS 5Ds. However, the A7R II ends up being a more versatile camera as it stands up to low-light shooting better than the Canon, despite not being able to equal the low light AF performance. Add in 4K video capture, and a lower price, and the A7R II pulls further ahead. For some shooters, the difference in size and weight alone will be more important than the 4K capture.

Once again, Sony has found itself at the forefront of image capture. We look forward to seeing what happens next.