You’ll finally be able to control the amount of fake bokeh in portrait mode. 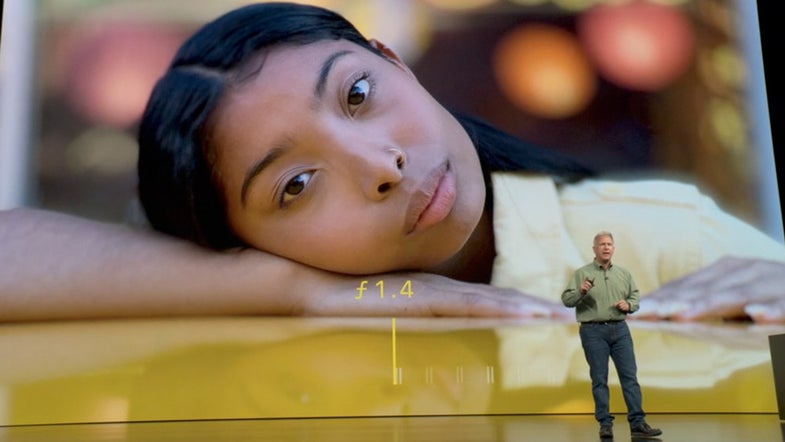 The big news from this week’s Apple announcement were the iPhones, of course, and there are officially three new models to check out: iPhone XS, XS Max, and XR. Here is what we know about them so far.

Apple has updated almost every hardware aspect of its cameras including deeper pixels on its sensor, which is also physically larger. It has a wide and telephoto lens, both of which are 12-megapixels in resolution.

The real updates, however, come from the processing power and the “computational photography” aspects of it.

Portrait mode has gotten a substantial upgrade in that you can now control the amount of fake blur it applies to backgrounds. You can have the background go from really sharp to very blurry.

The camera in the XR is the wide-angle camera module from the XS. It has Portrait Mode for blurry backgrounds, but doesn’t require the second camera for depth information. The Google Pixel 2 also does this with a single camera.

Apple spent considerable time bragging about the new HDR capabilities of the iPhone XS cameras. As part of its new A12 Bionic chipset, there’s a dedicated image processor to help accomplish tasks like blending multiple images together into one big HDR file.

Apple has been using HDR as the standard method for its iPhone photos since the iPhone 8, but now it’s taking even more photos of different exposures and smashing them together to get the effect of more dynamic range. AI is also examining the individual shots to see how they should go together in order to make one cohesive imag

The XS and XS Max are made of stainless steel with glass on the front and back. There are three familiar color options total. The back is the most durable glass on a smartphone yet.

The screen on the new iPhone XS is “Super Retina,” 5.8-inches OLED screen, 458 pixels per inch. The screen is as big as the iPhone 8 Plus, in a smaller device. It’s compatible with Dolby Visio and HDR 10 and has a 60 percent greater dynamic range.

There’s a bigger version with a 6.5-inch OLED display called the iPhone XS Max. That name is very bad, but the phone looks pretty amazing.

It’s now IP68 rated, so you can drop it in the pool and go get it and it will still be fine. That’s a step up from the bathtub-grade waterproofing on the previous models.

It’s an aluminum-shelled phone that looks like a hybrid between the iPhone 8 and the iPhone X. It has an edge-to-edge LCD screen, not a fancy OLED like the X models. Apple calls it the Liquid Retina display that’s 6.1-inches on the diagonal. It’s sized right between the 8 and the 8 Plus.

It no longer has a home button and you swipe up to go to the home screen. This is the bridge to the iPhone X series phones. It even has Face ID, so no more fingerprint sensor for logging into your phone. This is a much different experience than the 8 even if it’s aimed at a similar crowd.

The battery life in the 10R is 90 minutes longer than it is in the iPhone 8 Plus, which was a champ.

This is the budget version in the iPhone lineup, but they all share a reasonably similar form-factor.

Apple wasn’t kidding when it said the original X was the future for the iPhone.