The Standard Camera, Cameradactyl, and the PinBox are three cameras using 3D printing. 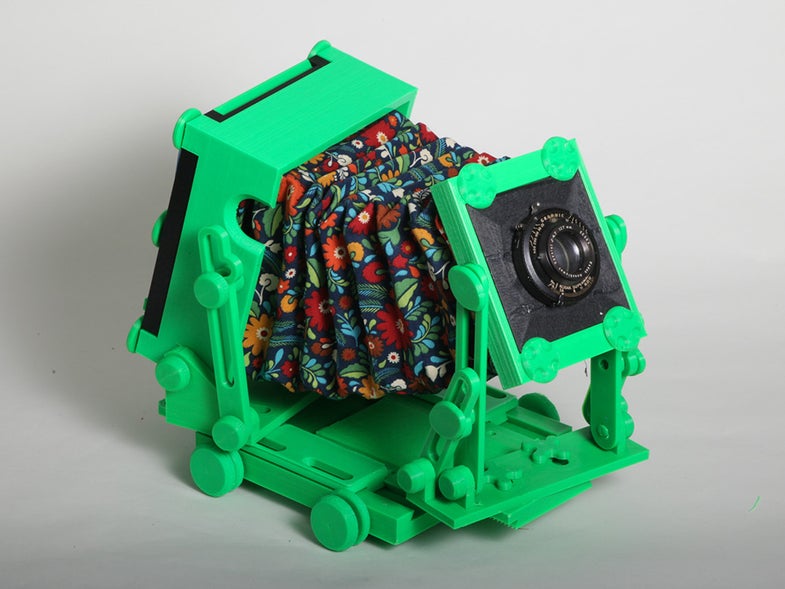 It seems these days there are few industries unchanged by 3D printing. The technology is being used to make advanced running shoes, to prototype new product designs and to make healthcare cheaper. It’s influencing the photography world, too—especially those pockets interested in analog techniques and DIY projects.

There are now several cameras to excite film photographers that use elements of 3D printing. The cardboard PinBox from Hamm Camera Company incorporates 3D printed film spools. Then there’s the Goodman One, an open-source camera designed by Dora Goodman and offered for free download via her website. And of course there are Kickstarter camera projects like the Standard Camera and Cameradactyl, which are are slinging 3D printed 4×5 film cameras that are affordable and lightweight, thereby making the format more accessible.

3D printing is reinvigorating the analog camera community. This new technology is breathing life into old camera designs for two reasons: (1) 3D printing is much cheaper than injection molding and (2) it allows for quick prototyping. The method makes it cheaper and easier for camera designers to tinker and for more photographers to try their hand at shooting analog formats.

The Standard Camera, which was created by photographer Drew Nikonowicz, is a 4×5 view camera that you can make yourself. It’s available via Kickstarter for $320 (or $350 if the idea of building your own makes your head spin). Nikonowicz, an Aperture Portfolio-prize-winning photographer who primarily works in large format, began designing his 3D printed 4×5 camera while he was still in college.

“The 4×5 was born out of a genuine excitement of photography and making things,” he says. “But I was also thinking ahead to when I graduated and I wouldn’t have access to the school’s equipment anymore.”

The majority of the elements on the Standard Camera are 3D printed in Nikonowicz’s studio—”If you are looking at the camera all of the parts that are black are 3D printed,” he says.

The standard forks, which hold the body of the camera, are made of aluminum. The bellows, which allow the lens to be moved back and forth for focusing, are made of fabric and crafted in house. He plans to outsource the ground glass (where you can see the image that the camera is about to capture) for cameras purchased by Kickstarter backers. He says he plans to use the money raised from Kickstarter to buy more 3D printers so he can increase his throughput—right now he can make one camera in two days (“Unless I don’t sleep, in which case I can do it in one day.”) He would like to start being able to print at least two cameras per day.

“The entire camera to some degree is in a perpetual state of change,” he says. “There are little tweaks to be had everywhere and I’m constantly getting feedback and constantly improving the camera.”

Eventually he’d like to make his design open-source and thinks that the Standard could be used by educational institutions and in workshop settings.

“A lot of photo programs want to teach large format but they can’t afford to,” he says. “I’m really hoping to work with those universities to kit them up with as many cameras as they need.”

While Nikonowicz’s camera looks like a standard traditional camera, one of the fun elements of 3D printing is the ability to make things that are anything but traditional. Meet Cameradactyl, a 3D printed 4×5 camera created by Ethan Moses, which comes in a customizable bright colors.

With a $225 pledge on Kickstarter, Cameradactyl backers will get a fully assembled camera with custom colors (it’s a bit like designing your own pair of Vans).

“I wanted to make the cheapest 4×5 and in keeping with that theme I just started buying the cheapest filament that I could find on Amazon,” says Moses. At first the cheapest filament was hot pink. When he ran out, baby blue was on sale. “It started out looking like a Barbie dream cam, then it got more green, then there was some yellow. I loved how wacky it was. I thought it was fun. It’s like a toy, but it’s a toy that you can take professional pictures with that are indistinguishable from pictures taken on a $2000 4×5, because ultimately, it looks like whatever lens you put on it.”

Moses has been into photography his entire life, building 8x10s on the cheap in college before spending about half a decade driving across the country buying and selling photographic equipment. He initially purchased a 3D printer to work on a project that involved drafting PCB boards for a temperature alarm he was designing, but as he waited for processing chips to arrive, he found himself with idle hands.

“I’ve built cameras my whole life and I just couldn’t help myself,” he says.

A few days later he was printing screws and sliders and within a month he had shelved the initial electronic project and built his first Cameradactyl camera.

“It kind of took over my life,” he says. “It is really amazing that I can make a camera for myself and there are a couple hundred people all over the world who are also interested in it. It’s maybe not a good business decision to be making cameras that were designed in the 1800s on a 3D printer, but it’s so fun.”

Moses bought more 3D printers before launching his campaign, and estimates he spent a few thousand printing hours making one full camera in every color. He also prints pieces to improve his printers.

“I buy terrible printers and then run them for 10 hours printing pieces to improve them,” he explains. “In 15-20 hours I have one printer that works pretty well. Then I’m able to make shapes that I could never make before.” Right now he says he can make about one camera’s worth of plastic in a day, and says that printing, grinding glass and building bellows in batches makes things go a bit quicker and brings down the cost.

“I’m like the miniature Henry Ford of wacky camera toys,” he jokes.

Moses says he has already had a few backers reach out and tell him that the Cameradactyl will be their first 4×5. He’d like to try to eventually make an 8×10 3D printed camera, a rangefinder, or an SLR.

“I think 3D printing and modern manufacturing technology is going to allow people to build toys and cameras that will perform just as well as a Leica or a Nikon with glass lenses and metal mechanical pieces,” Moses says.

Nikonowicz agrees, and says he typically prefers making he work with his Standard Camera over his Shen Hao field camera.

“There is less to juggle with the Standard,” he says. “I’m much more interested in photographs than cameras. I want to make a good camera, but your equipment should do its job and get out of your way.”