You Can Do It: Create Abstract Light Patterns In Photos Using LEDs

Rotate your LED strips to play around with composition 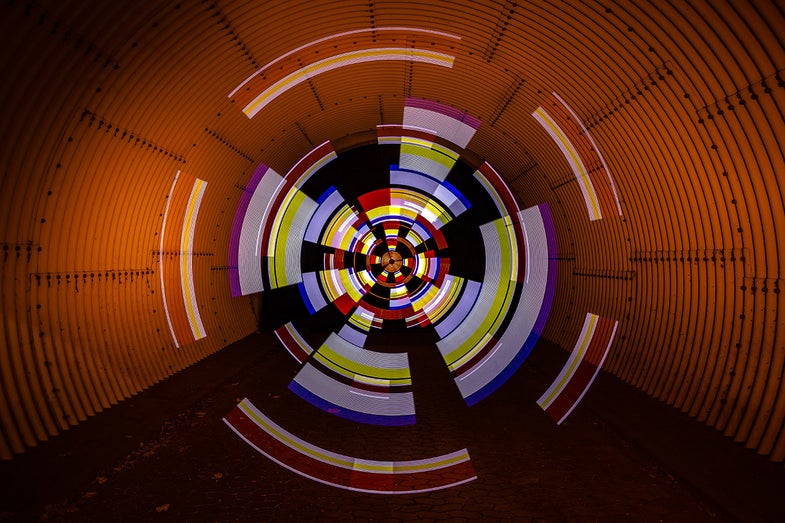 Germany is famous for precision engineering, so it should come as no surprise to discover photographic projects there that are unusually intricate. “Broken Circle,” below, was created by Heinz-Jörg Wurzbacher and Garry Krätz of Koblenz, Germany, a dynamic duo of paint-with-lighters that go by the name of Electrical Movements in the Dark or EMD. They made this single long exposure—214 seconds to be exact—entirely in the camera and edited it in a single Photoshop layer. Yes, it was complex, but we promise it’s doable.

EMD started by taking two 1.5 meter-long LED strips and taping them to two plastic gardening stakes of equal length. Using an appropriately sized plumbers’ T-joint, they connected the two stakes to form something like a propeller. They attached the base of the T-joint to a variable-speed, cordless drill which they mounted on a headless tripod with the help of a Manfrotto Super Clamp. Finally, in the dark and with the battery-powered LEDs turned on, they opened the shutter on their tripod-mounted Canon EOS 6D on the Bulb setting and set the propeller spinning at one of the drill’s slowest speeds.

At the camera’s lowest sensitivity of ISO 100 and an aperture of f/18, the photographers needed an exposure of nearly four minutes to produce the circles of light against the background that you see here.

To create the patterns, they turned the LED strips on and off during several spinning exposures, covering the lens in between each. For spacing between circles, they applied black tape over some of the LEDs so their output didn’t record. At the end of the exposure, they used a flashlight to paint the tunnel walls for a sense of environment.

As you might have gathered, doing such a project requires a team of at least two: one photographer to operate the camera and a helper to spin the lighting rig. Read on for more details.

Step 1 Gather the gear. You can get LED strips online, and they’re inexpensive. (A custom-sizeable, 5-meter-long strip with a wireless remote controller is under $12.) Some strips have only white LEDs; you gel them to produce color. More sophisticated strips let you program color settings and have adhesive backings for attachment to the wooden or plastic rods you’ll use create the propeller. Since LEDs produce hard pinpoints of light, shroud them in translucent plastic for a diffused look. You need two tripods: one for the propeller and one for the camera. Any DSLR with a Bulb setting and a mid-range zoom will work.

Step 2 Find your location and set up. You will need a location that’s completely free of extraneous light after dark. For your circles to be concentric, set things up so the center of the lighting rig and the optical center of the lens are at the same height. Do this by elevating each with the help of a reference rod that’s marked at the desired height. Dress, glove, and hood yourself in black.

Step 4 Make your exposures. This shot, made at 214 sec and f/18 at ISO 100, required multiple exposures. Between each of these, the photographer covered the lens with black flocking to prevent overexposure. You may also want to light the background. After spinning the light rig a few times, the EMD team removed that tripod and illuminated the tunnel walls with an amber-gelled flashlight.