With pro-level features at an enthusiast's price, Canon's bargain full-framer gets it right 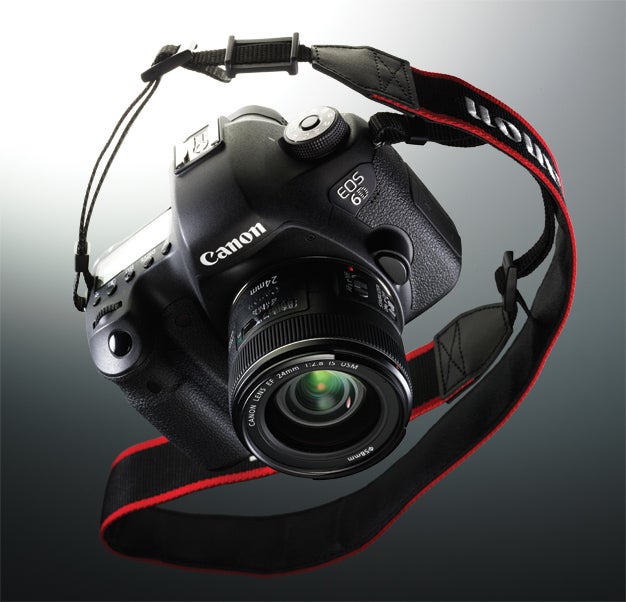 Ever since the first full-frame DSLR hit the market, photographers have been begging for less expensive options for large-sensor image capture. Canon’s current answer? The 20.2MP EOS 6D ($2,099, street, body only). While that’s still a hefty chunk of change for most people, it’s also $1,400 less than Canon’s EOS 5D Mark III ($3,499, street, body only). When we tested competitor Nikon’s D600 in our December 2012 issue, it proved a very capable camera that could easily serve as a backup body for a pro or a main camera for a photographer just getting into the full-frame world. Does Canon’s 6D deserve similar accolades?

In the Test Lab
Like the 5D Mark III before it, the 6D keeps noise well under control throughout most of its wide sensitivity range. This, along with serving up accurate colors and an admirable amount of resolving power, combine to earn the 6D an overall image quality rating of Excellent from the lowest sensitivity of ISO 50 (Canon calls it Lo) all the way up to ISO 6400. If you began your journey in photography during the film era, this means that you can get top-notch images at any of the ISOs that were available to you when you started shooting.

Color accuracy also easily snagged an Excellent rating with an average Delta E of 7.3. Though it’s rare to find a DSLR these days that doesn’t ace this test, Canon deserves kudos for maintaining its good track record in this critical area of imaging.

In our noise test, the 6D kept that pesky annoyance to levels commensurate with a Low or better rating all the way up to ISO 12,800. The only reason the image quality score didn’t reach that high up to this sensitivity is because of that sharp drop-off in resolution that we just mentioned. Interestingly, a similar drop-off occured in the 5D Mark III after ISO 12,800. Nikon’s D600 outresolves both the 6D and 5D Mark III, but holds noise to Low or better levels only up to ISO 3200. Meanwhile, that camera tops out at ISO 25,600, while both of the Canons mentioned here top out at ISO 102,400.

If there’s one area where you’ll notice the difference between the 6D and 5D Mark III, it’s in autofocus. It’s not that the 6D is lacking in any big way, but the 5D Mark III excels in this area with a 61-point system made for tracking fast-moving subjects. The tough part is that shooters who are used to Canon’s EOS 7D ($1,600 street, body only) might find the 6D a tad on the sluggish side, and not as powerful as that body when it comes to focusing. Furthermore, the 7D’s and 5D Mark III’s systems cover a larger part of the finder than the 6D’s 11-point diamond pattern does.

While the 6D can’t be called slow when it comes to AF, it becomes less consistent as the light grows dimmer. Our official test results represent the average focusing speed at various light levels when using our 50mm f/1.4 test lens. But, at EV 1 and darker, we saw more variation (in excess of a tenth of a second on either side of the average) than we’re used to. To its credit, the 6D never failed to focus in our test.

Its AF is also rated by Canon to extend down to EV –3, while the Nikon D600’s is rated as effective down to only EV –1, which we confirmed in our test. Our test only extends to EV –2 (the lower limit of our Sekonic L-758DR light meter), so we couldn’t confirm Canon’s claimed bottom limit.

In the Field
While Nikon’s D600 feels as though it belongs below the D800 in that company’s line of DSLRs, the 6D feels every bit as solid as the 5D Mark III. Sure, it’s missing some amenities, notably the 5D Mark III’s joystick and 100-percent accurate viewfinder, but it still has the feel of a powerful camera.

The 6D sports only a single SD-card slot (the Nikon D600 has two), and it lacks a pop-up flash (you can use the one on the D600 to wirelessly control off-camera flashes). We continue to be puzzled as to why Canon hasn’t begun to include this in more of its DSLRs, especially in one like the 6D that is meant to attract photographers who aren’t pros.

Anyone used to mid-level and above Canon bodies will find themselves at home with the 6D. Dedicated buttons for AF, drive, ISO, and metering line the top of the LCD on the camera’s top panel. The large wheel on the back provides constant access to exposure compensation, while an inset control pad lets you navigate through menus or select focusing points. This is not as elegant as a joystick, but it works just fine.

Canon’s 63-zone exposure metering system works quite well. It did a good job of conserving highlight info, but it doesn’t seem to make decisions that are as complex as Nikon’s Matrix metering does. Furthermore, the D600’s spot meter is much tighter, covering 1.5 percent of the finder versus the 6D’s 3.5-percent spot.

Burst shooters won’t be blown away by the 6D’s 4.5-frame-per-second continuous drive mode, but we should remember that only a few years ago this would be considered fast for a camera in this price range. The buffer can hold up to 1,250 large, fine JPEGs, 17 RAW images, or 8 RAW + large, fine JPEGs. The D600 captures one more frame per second than the 6D, but maxes out at 57 JPEGs while allowing up to 16 RAW images.

The coolest new thing about the 6D is its built-in Wi-Fi. At a family gathering, we shot a group portrait, downloaded the free (Android/iOS) Canon EOS Remote app to a Samsung Galaxy SIII smartphone, figured out how to pair the camera and phone without reading any instructions, and managed to have the shot uploaded to Facebook all within 10 minutes.

Pairing the devices took the longest chunk of that time—though it shouldn’t have. Just make sure to activate Wi-Fi on your phone, select the camera through the phone, and all should be well. We mistakenly tried pressing the camera connection button in the app without first telling the phone to accept the Wi-Fi connection to the 6D. Subsequent uploads went quickly and painlessly.

In addition to transfering images, the app can be used as a remote viewfinder. Place the 6D anywhere within Wi-Fi range and you can see the camera’s live view through your phone, change basic settings (such as shutter speed, aperture, and ISO), and trigger the shutter.

Bottom Line
Just as with the D600, we were quite impressed with the EOS 6D. There are clear compromises that must be made to reach this price point, but we feel Canon did a good job of cutting costs in the right places to create a camera that is a pleasure to use.

Shooters who demand pro-level power will still gravitate toward pricier models or stick with APS-C. But, for the majority of shooters, the 6D offers plenty of bang for the buck. At the same time, we hope Canon includes a pop-up flash on the next iteration of this camera. The benefit in wireless control alone is enough to warrant it. Plus, even though we always say not to use it unless you absolutely have to, we do sometimes use pop-up flash and it’s good to have in a jam.

While we’re sure that there will always be people who want full-frame image quality for even less money, Canon has done a great job of delivering wonderful image quality for a price that should satisfy more photographers than ever before.