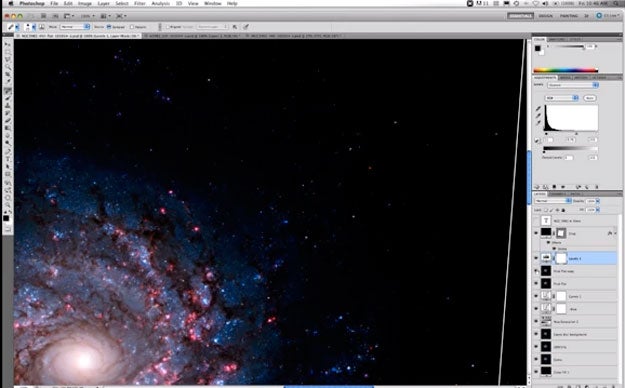 If you’ve ever spent any amount of time laboring in Photoshop, stitching together a massive panorama or carefully curating an HDR image, you’ll surely appreciate this lively time-lapse of the process that goes into making a Hubble Telescope image. Unfortunately, it’s not quite as easy as it is for the Astronauts and their Nikon D2Xs DSLRs.

As the Hubble site explains, the images that come directly from the cameras are black and white. The Hubble sensors collect lots more wavelengths than the human eye can see. Color is determined by filters over the sensors and applied to the image during post. Because our eyes would miss out on the infrared and ultraviolet elements, the post-process brings that light into the visible spectrum like a kind of celestial HDR. The Hubble site suggests that the images you’re seeing simulate a situation in which your eyes are as powerful as the space telescope. Here’s a cool demonstration on how the filters actually work.

You’ll also notice that the original image has an odd shape that’s not unlike stairs. That’s a result of the Wide Field and Planetary Camera 2, which is no longer in use. The missing section isn’t omitted, but rather that area of the camera is used to capture a magnified view of the subject. Before a full image can be put together, that part of the picture has to be scaled to match the rest of the capture, resulting in an oddly shaped corner.

You can do all kinds of nerving out on Hubble’s Behind the Pictures site.