Tips From a Pro: Shoot in the Rain

Pouring outside? No problem. 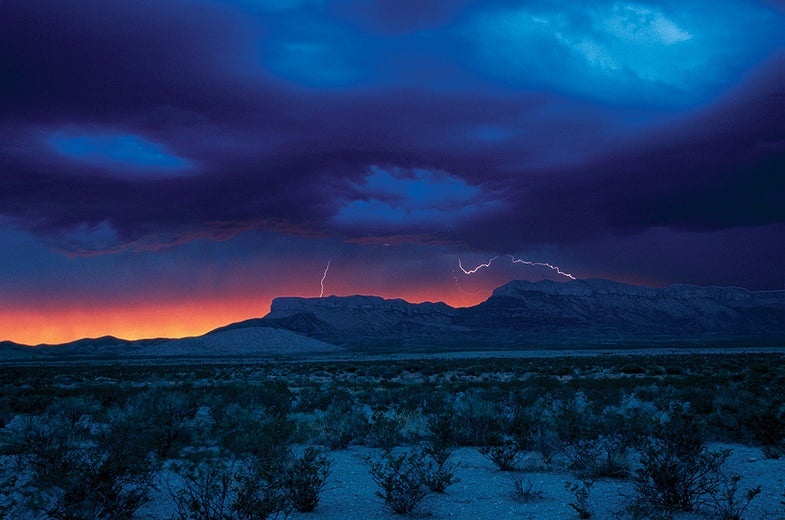 “I love shooting in the rain,” says Art Wolfe. “I find inclement weather brilliant to work in. When most people pack up and hide, I bundle up and go out.” Preparing at the time of this interview for a whirlwind tour of Thailand, India, and Japan, the Seattle-based Wolfe is a tireless traveler, photo-workshop guru, and, of course, a preeminent nature photographer. “Inclement weather provides opportunities for memorable shots that you wouldn’t get otherwise,” he says. “The more drama that the environment provides, the more artistic and memorable the pictures. As long as I won’t ruin my camera, I love capturing images in adverse conditions.”

To that end, Wolfe uses Storm Jacket camera-and-lens rain covers when shooting in the field in wet weather. “Or often I just use whatever’s available, a plastic bag, a jacket—you know, I’m opportunistic,” he says. “If suddenly there’s a cloudburst and I don’t have any lens protection, I will make something. I’ll take the jacket off my back. I’ll get drenched, but I’m going to keep the camera operating.”

He notes that most DSLRs he uses are fairly watertight. While he obviously doesn’t recommend, as he describes it, “holding the camera under a waterfall,” a little mist probably won’t hurt. After the shot, he takes care to dry off his equipment. “I try to have a little hand towel; I don’t let water stay too long on the gear. It’s a matter of protecting the lenses and not getting moisture within the elements. I’m not fanatic about keeping the camera dry—but I’m also not just ignoring it.”

Wolfe’s work shows just how wide a range of images you can get when you know how to tackle inclement whether. We asked this nature master to tell us how he captured some of his favorite pictures taken of precipitation, and to give us tips on how to make the most of any rainstorm.

To photograph a tempest where parts of the scene are bright and parts are dark, as in his photo of the landscape take in Canyonlands National Park near Escalante, Utah, Wolfe recommends setting the camera to manual and using center-weighted metering. Then spot-read on the brightest part in the scene. “By doing that,” he explains, you “allow the rain clouds to go dark. This heightens the drama between the light and the dark areas.”

His 1/25 sec exposure necessitated a tripod, but you might be able to get away without one. “I’ve historically used tripods almost all the time,” he says. “But times have changed—and ISOs have gotten so good that whenever I can get away from using them, I do. But I still pack them because I work around the margins of the day a lot. Without a tripod, you limit yourself.”

Shoot in a Downpour

Wolfe captured a herd of impala in the Lake Nakuru Region, Kenya, from inside a rented vehicle, using a 600mm telephoto lens. “It was absolutely a downpour,” he recalls. But he didn’t let that stop him from shooting. In this case, the photographer stayed inside his Land Rover and chose his vantage point carefully.

If you’re photographing from a car in rain, he recommends parking it at an angle that will prevent the storm from blowing into the open window and damaging your equipment. It also helps to know the behaviors of your subjects.

“The rain was so heavy,” he says, “that the animals stopped and stood facing away from it. The impala just stopped moving, because in that type of rain, they assume that the rainstorm will be over in 20 minutes. It’s not worth moving during that time into uncertain territory when they have marginal visibility. There could be lions waiting for them. They just waited out the rain, and I was able to position myself and get that shot.”

“Rainbows are easy stuff,” Wolfe says of his image made outside of Anchorage, Alaska. “They’re predictable. When the sun dips low to the horizon late in the afternoon and you have a combination of rain and sunlight, you can anticipate a rainbow. In this case, flying in a small plane, I didn’t predict it; I reacted to it.”

He also recommends using a circular polarizing filter, but warns that it can eliminate the rainbow if you’re not careful. The trick, he says, is to study what’s happening with the viewfinder and turn the polarizer to bring out a little more snap and contrast in the scene. This method works best when the camera is at a slight angle to the rainbow.

Wolfe’s study of water droplets on lupine leaves in Washington’s Mount Rainier National Park was made with a 100mm macro lens. “For this kind of intimate close-up,” he advises, “get the [sensor or film] plane parallel to your subject to achieve maximum depth of field. It adds one more element that makes the study interesting.” And you don’t have to stop down to f/22 to get everything in focus if you can attain it at f/11—which means a sharper, crisper image. He adds, “Here I’m definitely using a tripod, cable release, all those things that go part and parcel to shooting details of the subject.”

“With lightning, there are two ways you can go about it,” Wolfe says. “One way is to get a device [i.e light-activated shutter trigger] that you attach to your camera that senses an impending strike, and it virtually opens the camera up so you catch the lightning. I’ve never used it,” he adds with a chuckle, “but I’ve heard it’s pretty effective. I do it the old-fashioned way: guesswork.”

For the photo shown here, taken in Guadalupe Mountains National Park in Texas, Wolfe explains, “The lightning storm was at dusk; there was some ambient light so you could see the landscape, and I could obtain a 10-second exposure. In those 10 seconds, if you’re lucky, the strike happens. And if you’re not, you just trigger another exposure—it’s like casting a net to catch fish.” Getting a great lightning shot often requires patience and taking many long exposures. Aim to capture lighting at night, Wolfe recommends, “so you can leave the exposure open for minutes at a time. Use a wide-open aperture such as f/2.8, and a cable release, with the camera pre-focused. If it gets totally dark, just focus on infinity. It’s pretty easy—but you also have to get lucky.”

Wolfe captured the shot of maples in Washington’s Columbia River Gorge using a medium-format camera and 45mm wide-angle lens (28mm equivalent). “This was a spring shower that came up quickly, but the sun was still out,” he recalls. “There was probably an amazing rainbow nearby.”

Despite the rain, he had good light. “When it’s a downpour but the sun’s out, you’ve got a faster shutter speed to work with—here it was 1/2 second, with a wide aperture of f/2.8. There’s enough light that it creates the illusion that it’s a longer exposure. The rain was so heavy that you can shoot fairly fast but still see the streaks of water. Once again: Dramatic weather makes  for nice pictures.”