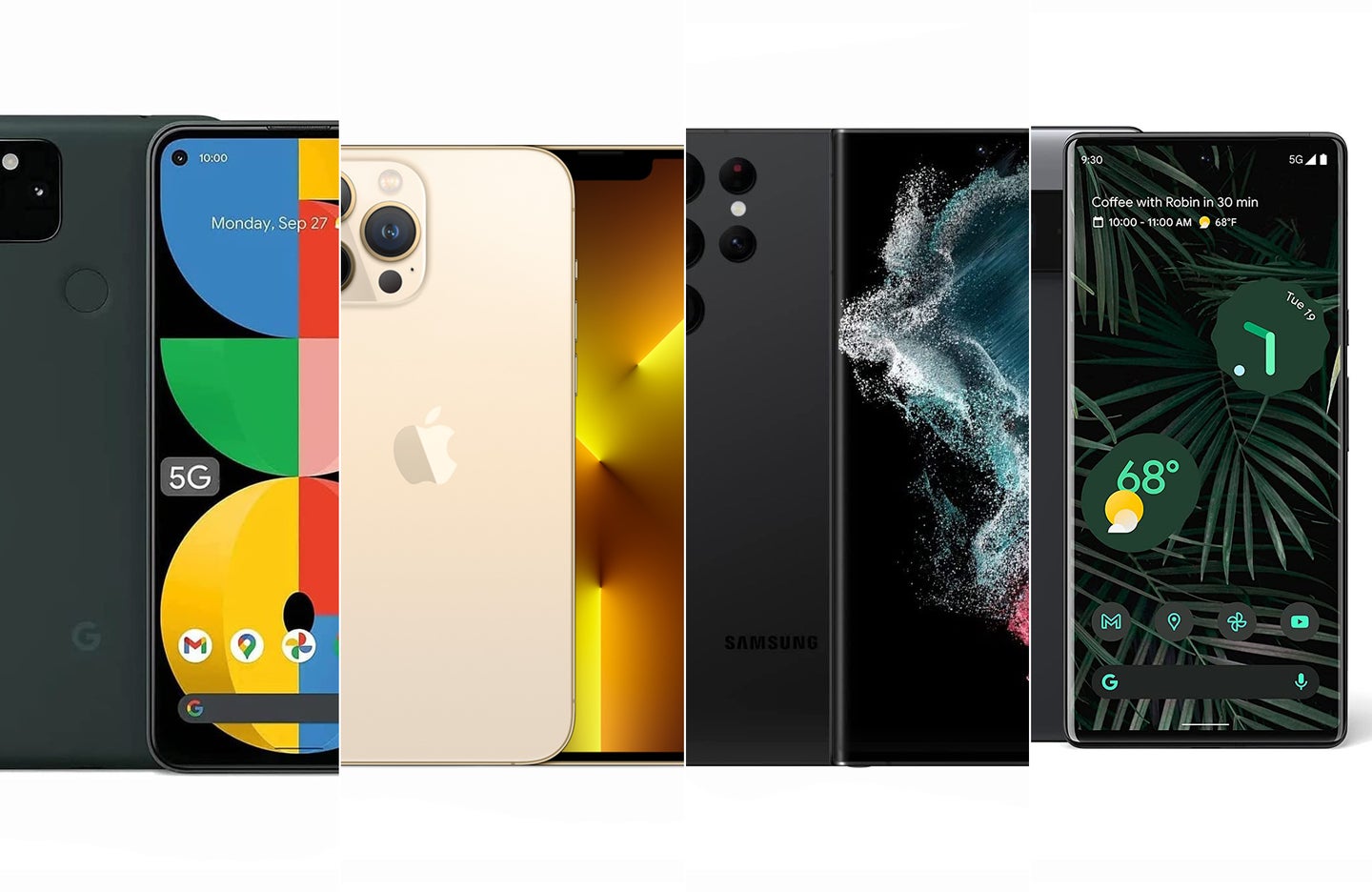 From casual shots to social media-worthy portraits, your smartphone camera is your direct connection to the world.

If you think about it, social media might not have grown so quickly and become so ubiquitous without the smartphone camera. Imagine it—a purely text-driven experience would have only progressed so far and likely would have gotten old fast. But once people were able to take hi-res pictures, edit them on their phone, add filters and animated stickers, and then post them directly to their platform of choice, it changed the phone from something you use to reach out to others into something you use to present your personal perspective on the world.

As quality has increased, the importance of the smartphone camera has only continued to grow. In fact, it’s one of—if not the—most important selling point when new smartphone iterations are launched. People want to know they can make themselves and others look amazing without having to lug professional-grade cameras and lenses around with them wherever they go. One well-equipped smartphone camera is all you need, and you have plenty of options when searching for the right one. Here’s how you can get started finding one of the best camera phones for you.

How we picked the best smartphone cameras

We started our quest for the best smartphone cameras with a survey of the current models from the big manufacturers. We relied on a mixture of hands-on testing, editorial reviews, user feedback, and spec comparisons to choose the models that offer the best overall performance. It takes more than just amped-up specs to make a great smartphone camera.

Features to look for in the best camera phones

The smartphone camera quickly went from a neat perk to an essential feature, and each new phone has upped the ante in terms of higher resolutions, more versatile presentation formats, and more sophisticated editing capabilities. So while you still want to consider basic things like battery life, app availability, and calling plan options, getting an amazing camera on your phone is pretty much top priority. And, yes, you do have options. Don’t get stuck with subpar performance—here’s what to look for when shopping for the best camera phone.

Does your phone offer zoom power?

There’s an impressive new development in camera phones: the optical zoom. Earlier camera phones were equipped with digital zoom, which relied on software to get close to the object you were shooting. The camera would take the portion of the image you framed and capture the image, but with fewer pixels, often resulting in a picture that was blurry, pixelated, and less detailed. While improvements in sharpening image software have improved these pictures, they’re still not as sharp as photographs captured using optical zoom.

Now, camera phones can allow for 3x and 10x optical zoom, with some advanced options even offering up to 100x space zoom. Optical zoom requires the mechanical movement of the lens in order to magnify the image, which results in some amazingly detailed photos at any focal length. For a handheld device, that used to be a challenge, but modern phone technology means you can capture crystal-clear images even from afar.

Do you want to capture high-quality video?

If you’re ready to up the ante on your YouTube channel or Instagram reels, it’s worth it to invest in a cell phone with advanced video capabilities. In fact, whether you’re a casual videographer or looking for more professional-grade videos, it’s never been easier to get amazing video from camera phones. The best smartphone cameras for taking video will offer crisp 4K (or 8K) resolution video, wide-angle lenses, advanced zoom capabilities, improvements in color capturing, and corrections for night vision and low light environments. In fact, the latest from Apple (iPhone 12 Pro Max) offers a unique new feature for video: the ability to shoot with Dolby vision, which records with 60 times more colors (it’s so impressive, it’s the format used by film studios).

Are you a professional who wants to use more than one lens?

It’s clear that smartphones offer us so much more than just amazing cameras and video. But if you’re using it in lieu of a physical camera, you want to select the best smartphone camera possible. The best camera phone for pros will offer multiple lenses, allowing for the ability to customize the camera settings for optimal portrait shots, wide-angle, zoom functions, and micro settings for close-up shots. They should also offer multiple photography modes for quick visual effects as well as photo and video editing modes. Expect to pay a premium for quality—professional-level camera phones will usually hover over $1000.

Will you be shooting in low-light environments?

Even with phones that capture full 4K video and hi-resolution images, a little thing called “night time” can still seem like an insurmountable hurdle. Blurry lights and indistinct details ruin perfectly good photos once the sun goes down, and using the built-in flash usually makes everyone look like they’re trapped in the headlights of an oncoming car. But if you want to take decent nighttime pics, look for a phone that captures a burst of photos and stitches them together to create one crisp and contrasted low-light image.

What do you do when your kids start asking you for an iPhone?

It’s the moment you’ve been silently dreading as a parent. Your kids reach that age where it’s time to have “the talk—” no, not about the birds and the bees, but about smartphones. They are going to want one, and you’re going to have to relent at some point. But you don’t necessarily have to invest a ton of money in something that they’re just learning to use (and learning to be responsible for). Look for a more affordable and durable option that will still give them the capabilities to get creative with the camera, whether they’re taking family vacation photos or snapping selfies with their best friend.

Why it made the cut: A large sensor and a fast lens combine with high-end AI smarts to make the best phone camera around.

With an impressively long battery life (up to 20 hours of video playback), the Apple iPhone 13 Pro Max offers a bright, crisp OLED screen and high-end cameras. The ProRAW mode captures images that have a wide array of editing capabilities, while the film-grade Dolby vision video allows for high-level editing and imaging of 4K video. All these features come with a high price tag, and a bit of a heavier weight compared to other iPhone models—but if you’re looking to level up your content creation, this pick has all the bells and whistles to capture stunning high-definition photo and video. The overall image quality has taken a big jump since the already excellent iPhone 12 Pro Max thanks to a new sensor and lens system.

Why it made the cut: You’d be hard-pressed to find a camera feature on the market that this phone doesn’t offer.

The most advanced offering from Samsung features a multi-lens camera with a high 108MP resolution, so you can shoot high-resolution photos or combine those pixels into groups to get more detailed images at lower resolutions.. Zoom features on the Samsung Galaxy S21 Ultra are also impressive, with their dual-lens combination offering 3x and 10x optical zoom. This pick also can shoot video in 8K for sharp, professional-quality footage with the press of a button. The laser-based AF also helps the phone focus faster. When it comes to smartphone cameras, this one promises every cutting edge feature you can think of. Samsung has also improved it’s night shooting modes as well as its AI-powered portrait modes to make them even more effective than before.

Why it made the cut: Google used its AI expertise to make this one of the best low-light phones around.

One of the main selling points of the Google Pixel 6 Pro is its “Night Sight” function. Essentially, instead of trying to capture a single (probably blurry) night photo, this function captures an equal amount of light over a burst of many photos and then merges them to create one sharp, dark image with more balanced colors. It’s a huge step up and basically, helps make night photos if not 100% perfect, at least more salvageable than those taken with a simple smartphone camera. In addition to their advanced low light photography tech, the Google Pixel also features an ultrawide lens for sweeping landscape shots and a stunning portrait light mode. The main camera’s 50-megapixel resolution pulls lots of detail out of any scene and the Magic Eraser tool easily removes unwanted objects with spooky ease and accuracy.

One of the more affordable iPhones, the Apple iPhone SE still delivers what you love about Apple products without carrying the extra burden of being incredibly expensive. It has a slim, light design, is water-resistant, but still has bells and whistles like full 4K video, 4.7-inch retina HD display, TouchID security, and more than enough processing speed to handle apps and games. It’s the first iPhone that doesn’t feel remedial in the slightest.

Why it made the cut: It only has one camera module, but it’s a solid all-around performer.

Loaded with 12MP Ultra Wide, Wide, and Telephoto cameras, a 5x optical zoom range, night mode (including night portrait mode), Smart HDR 3, and 4K Dolby Vision HDR recording, it’s hard not to single out the iPhone 12 Pro Max. With its quick refresh rate and ability to pick up details in dark environments, the Google Pixel 5 is also a winner.

Q: Is it better to buy a camera or a phone?

Not to pass the buck, but it depends on what you’re looking to do. If you want to embark on a career in photography (or even an in-depth hobby), you likely want to look into a powerful, versatile camera with multiple lenses and other accessories. But if you just want to level up your social media posts and need a device that can also serve you apps, take calls and texts, and be by your side even when you’re not shooting pics, then invest in a great camera phone.

When judging a good versus a bad camera phone, you’ll want to measure things like megapixels (which impacts the final image resolution), aperture size (which affects how light or dark an image is—camera phones have one fixed aperture size so look for one that’s as wide as possible), and lens quality (which can help you avoid blurry long-range pics).

A final word on shopping for the best camera phones

At this point, it feels almost silly to separate the camera from the rest of the smartphone. Having all you need in one device—a camera for capturing special moments, apps for sharing them on social, and messaging services to stay connected— just makes sense. And now that smartphone cameras deliver professional-quality images and editing capabilities, there really is no doubt. Just consider what your needs are and how you plan to use the images you capture when selecting the best camera phone for you. Whether you’re an amateur photographer or a social media junkie, there are options and variations to suit your needs.