Sony’s latest RX10 gets a stacked sensor, 600mm of zoom 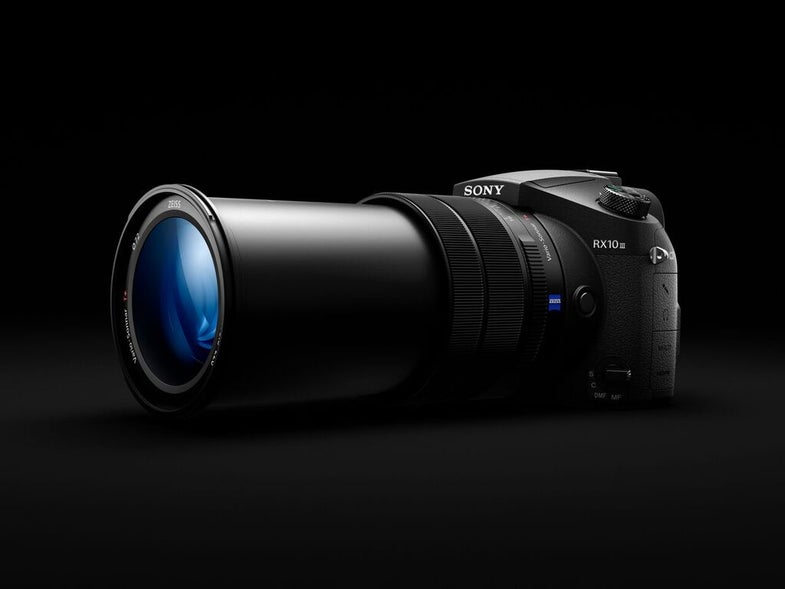 Making the most of its Bionz X processor and the 1-inch sensor developed for the RX100 IV, Sony has announced the 20.1MP RX10 III. Like its tiny cousin, the RX10 III can capture 4K video without pixel binning, and can shoot slow-motion video at up to 960 frames per second for up to 40X slow-mo. It can also capture bursts at up to 14 fps, though you’ll have to sacrifice metering and autofocus between shots if you want to reach that speed.

The biggest change to the camera is the revamped lens. While the RX10 II had a 24-200mm f/2.8 zoom, the RX10 III sports a 24–600mm (full-frame equivalent) f/2.4–4 Vario-Sonnar T* Zeiss-badged lens. While I haven’t had any time with the camera yet (hoping for some later today), I doubt that you’ll be able to get 200mm at f/2.8 with this new lens, but 600mm at f/4 is a very nice consolation. Furthermore, the new lens, which boasts seven ED and one Super-ED glass elements to fight chromatic aberration, can focus as close as 0.1 foot (3cm) with a maximum magnification of 0.42X at 24mm and to 2.36 feet (72cm) with a maximum magnification of 0.49X at 600mm. That’s quite impressive for a lens of this focal length and size. The lens also includes optical stabilization that Sony claims can provide 4 stops of shake reduction when shooting handheld.

The lens barrel itself has three control rings on it: one for zoom, one for focus, and one for aperture. The aperture ring has the option of click-stops or smooth operation. This helps when you’re shooting video and don’t want the jarring clicks screwing up your footage. The lens barrel has a focus hold button so you can lock focus and then recompose your image. That button can also be assigned a custom function if you don’t care for the notion of locking focus. One such custom function will zoom the lens all the way out with one press and then, with the second press, zoom back to the focal length you previously had. This can come in very handy if you lose track of your subject when shooting at very long focal lengths.

Other details include dust and moisture resistance, a Multi-Interface shoe for flashes or other accessories, an LCD panel on the camera top to check your settings, an OLED electronic viewfinder with slightly higher magnification than its predecessor, a tilting rear LCD screen, and sensitivity that spans ISO 64–12,800. Plus, thanks to the fast readout of the sensor, there’s a top electronic shutter speed of 1/32,000 sec with minimal motion distortion.