This new visualization gives an insider view of the occasion. 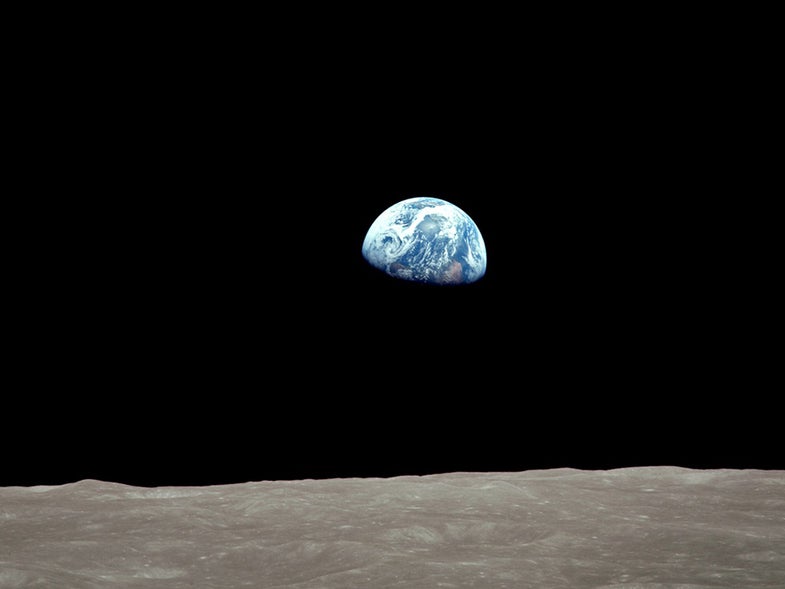 The three Earthrise photographs, scaled and rotated to match the telephoto view of the preceding frame set. NASA
SHARE

Earthrise is an image that has come to define the 20th century. The iconic frame was taken fifty years ago by astronaut Bill Anders aboard Apollo 8 and famously shows the Earth rising over the moon.

A new visualization from NASA provides a fascinating recreation of how the picture was made. Created by Ernie Wright and narrated by Andrew Chaikin, the six minute video pulls together archival audio tracks from the spacecraft, elevation data from Lunar Reconnaissance Orbiter (LRO), and stereo photographs taken from a Hasselblad camera that was mounted inside the spacecraft and making exposures of the moon’s surface every 20 seconds.

The visualization makes it clear that the iconic image was very much a group effort, and one that might not have been captured if it wasn’t for a few key details that were made by the team aboard Apollo 8.

The day the image was taken Frank Borman was in the left hand seat preparing to turn he spacecraft to a new orientation. If it hadn’t been for his precise timing of the roll, then Bill Anders, who was in the right hand seat with a second Hasselblad camera, wouldn’t have even seen the Earth on the horizon.

The photos from the mounted Hasselblad camera running on a timer are a crucial aspect the new video. Those original images were matched with the high resolution terrain maps gathered by the LRO to create an accurate recreation of the day. The original audio provides another fascinating layer to the day.

Related: Two stars in a fight to the death

Around the 3:30 mark in the video you begin to see the Earth rise and Anders gasp “Oh my God, look at the picture over there!” His first shot of the moon is actually in black and white. He smartly requests that Jim Lovell grab him some color film, but Lovell is a little slow on the draw, and we hear a disappointed sounding Anders mention that he missed the shot. But moments later the Earth re-appears in the bottom hatch window and you hear Anders and Lovell rushing to finalize the settings on the camera and get the iconic shot.

The moment was a totally unexpected one for the men on board Apollo 8, and this new visualization sheds light on what it was like to be on board that day. It’s a nice reminder that sometimes the best photographs are those unexpected ones that you discover by keeping your eyes wide open.