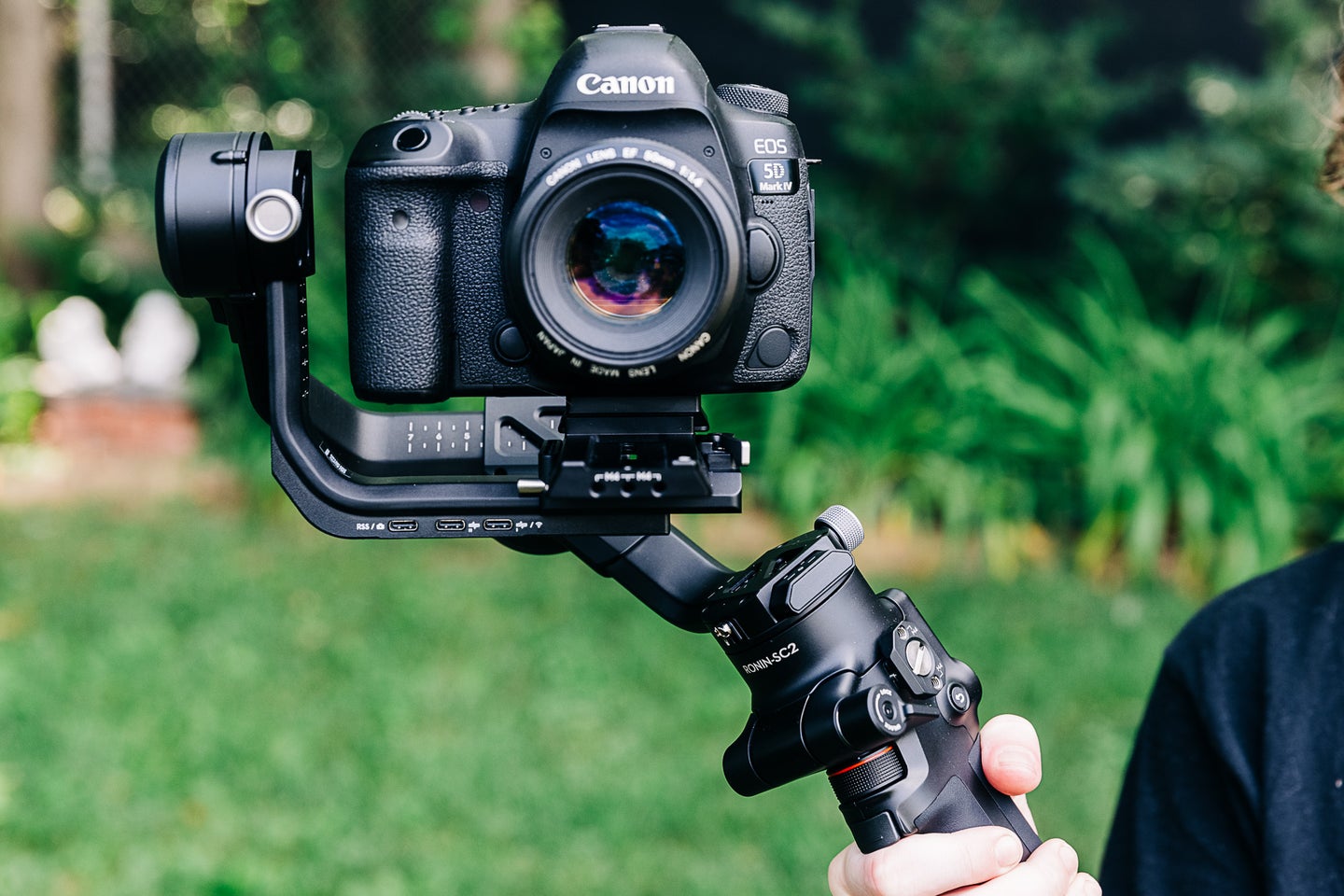 There’s really no excuse for shooting shaky video in 2021. In-camera image stabilization has come a long way, but if you want truly cinematic-looking footage, a motorized gimbal is the way to go. With its new RSC 2 gimbal, DJI has made some welcome improvements to its popular line of prosumer-grade camera stabilization systems. It offers more payload capacity, better stabilization, and a flexible design that makes it an essential kit for shooters who want to go handheld without making their audience feel nauseated.

Like the camera stabilization systems found in DJI’s drones, the DJI RSC 2 employs a series of built-in accelerometers and gyros to analyze the camera’s movements in real-time. It then uses a series of quick-moving motors to counteract those movements and keep the footage steady.

The RSC 2’s build is meant to accommodate mirrorless camera rigs up to 6.6 pounds, which is plenty for a regular-sized mirrorless camera like the Canon R5 or the Sony A1 and a normal lens. Putting a load that’s too heavy on the RSC 2 will put too much strain on the motors and eventually burn them out.

In addition to stabilizing the camera when you’re hand-holding it, the gimbal also has built-in controls. So, if you want to perform a nice, clean pan while the camera is sitting on the included mini tripod legs, you can do that. If you dig into the more advanced features, it can also help with cool features such as time lapse shots that move over time.

The DJI RSC 2 has a learning curve. It comes out of the box folded up, which is a very handy upgrade over the previous model when it comes to storage and travel. Unfold it incorrectly and it quickly becomes more of a puzzle than a piece of gear.

Once you have it correctly oriented, it’s time to balance the camera in the rig and that definitely takes some practice as well. I first set up the RSC 2 with Sigma’s fp L camera and it took me a solid 30 minutes of tweaking to get the camera balanced before I could even turn the gimbal on.

The balancing system is actually rather clever. Each point of articulation locks and unlocks so you can balance the camera on a vertical axis while keeping the other joints locked up. This part of the balancing process happens in a decidedly analog way. Camera leaning too far forward? Unscrew the bolt and physically slide the platform backwards to move its weight.

It won’t take me 30 minutes every time. In fact, after a couple weeks of use, I can set it up for a new camera in 10 minutes or so, even with a double check to make sure everything is just right. But, expect to spend some time tweaking.

Once you’ve achieved balance, the gimbal connects directly to the camera with an included cable. This allows you to control the camera for functions like focus and recording. I connected the RSC 2 to a Canon R5 and the control options are basic, but useful.

Once you turn the gimbal on, it will automatically start balancing the camera and stabilizing footage whether you connect the camera or not. If you didn’t get the balance right, you’ll know fairly quickly because the device will sense the imbalance and turn off the motors to prevent them from burning out.

The M button on the DJI RSC 2 lets you change up the stabilization modes depending on what kind of motion you want to allow for the camera. For instance, do you want the camera to stay on a fixed vertical point or do you want to be able to pan up and down while the gimbal smooths camera shake and horizontal motion? Finding the right mode can take a little practice, but the best way to really figure it out is by experimenting with it.

It’s handy that the RSC 2 folds up when you’re traveling. If you buy the upgraded kit, it comes with a reinforced travel case made specifically for it. The folding, however, also allows you to use the gimbal in different orientations. You can flip the whole thing over and then move the handle horizontally over the top for low-angle shots. The whole setup isn’t exactly light with a camera on it, so being able to shift the weight and rearrange the handle can come in handy. This is one of the big reasons you may want to spend the extra money over something like the Ronin SC.

How well does the RSC 2 work?

Once you’re up and moving around, the DJI RSC 2 is impressive. I walked around a busy farmer’s market to shoot some B roll and found that it does an excellent job of smoothing out jitters and bumps, even from walking. If you want to make a video blog, for instance, in which you talk to the camera as you walk, the RSC 2 will have no problem smoothing that out.

The built-in battery promises up to 14 hours of battery life before you need to charge it through the built-in USB-C port. I didn’t have any video shoots nearly that long (at least I haven’t yet), but the battery is clearly very robust. Even after taking it out on several different shooting occasions, it still had 40 percent of its battery life left, so it wouldn’t surprise me if it actually got up to that 14-hour mark.

While the long-lasting cells are nice, they’re also not replaceable. So, if you forget to charge the device or you just have a marathon shoot, you can’t quickly swap out the battery and keep going. That’s worth noting if it’s relevant to your specific shooting needs.

You have a decent amount of control over the device directly from the 1-inch display and the integrated controls. The thumbstick makes it easy to move the camera around in just about any direction. A control dial on the left side of the device makes it simple to navigate the basic settings you’ll need on a regular basis.

To get into the more robust features, though, you’ll have to download the DJI app. That’s where you’ll find the pre-programmed camera movements and other features like time-lapse shooting. I opted for the RSC 2 mostly just because I wanted a super-stable camera platform, but the extra features proved surprisingly useful. I haven’t shot many time lapses in the past, but I want to now just because I can.

There are some features that require buying even more gear beyond the $500 base price of the RSC 2. The $159 RavenEye accessory transmits video to your smartphone so you can use it as an external monitor. It also unlocks the RSC 2’s ability to lock onto a subject and track it as it moves. If you have a camera without a rotating screen, this is pretty much essential since the gimbal arm will get in the way of your camera’s display sometimes otherwise. If you’re not a skilled gimbal operator, the automatic tracking is also very helpful for keeping your subject in the shot.

Who should buy the DJI RSC 2?

There’s not a ton of competition out there when you’re looking for a gimbal like this. DJI’s own Ronin SC offers some similar features, but it only supports up to 4.4 pounds of payload, which is pushing it if you want to run a full-frame mirrorless camera rig. That’s especially true if you want to add accessories to the payload, like monitors and microphones.

The Zhiyun Crane 2 offers a more direct comparison. It promises to carry a heavier payload and also allows for interchangeable batteries so you aren’t out of luck if your device dies in the field. I have limited experience with the Crane 2, but it felt solid in my short time with it. I do have more experience with DJI’s customer service department, which has been excellent in the past and sways me more toward DJI, even if the hardware comparison is relatively close.

If you’re comparing the RSC 2 against a lower-end model to save money, I typically encourage people to be realistic about where they want to go with their gear in the future. Spending a little more now may actually save you money in the long run in case you hit the limits of something like the Ronin SC and want to upgrade.

For $500, the DJI RSC 2 is a very solid bit of gear that should serve you well for many, many hours of dreamy, rack focusing b-roll.