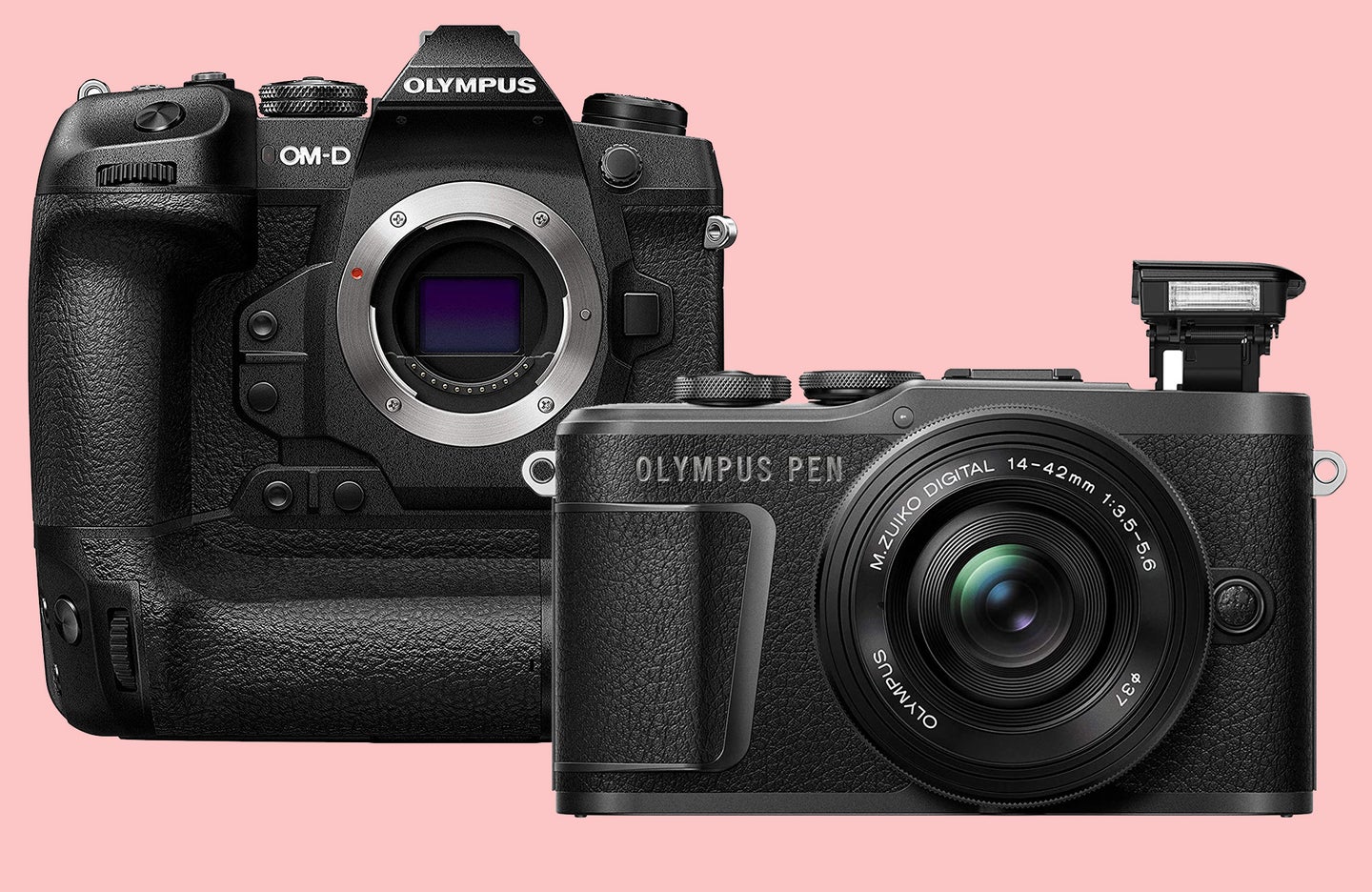 Regardless of your experience level (or budget), there’s an Olympus camera that meets your needs. In this round-up, we help you find the camera that’s best for you.

Olympus has a long history in the photo industry, producing a wide range of cameras since 1936: medium format, rangefinder and 35mm film cameras, including the unique Pen half-frame 35mm camera. (The latter was the late fashion photographer Bill Cunningham’s first camera.) The company moved into digital in 2003 with the E-1 DSLR built around a 5-megapixel Four-Thirds sensor and then transitioned into mirrorless using Micro Four Thirds (MFT) sensors.

In the early days of digital, Olympus was innovative and developed new features before any other manufacturer. For example, the E-1 was the first digital camera to offer live view (albeit a cruder version that today’s cameras). The company also created a mechanism to shake dust off off sensors, to name just a couple of features that were on the leading edge. That experience prepared Olympus to bring some notable technology to its present day cameras so you have plenty of options to choose from.

Now, the company has sold off its digital camera division, but many of its most popular lines will continue on under the OM Systems name. In the meantime, here are the best Olympus cameras for any type of shooting.

What to consider when shopping for an Olympus digital camera

Like any digital camera, selecting the best Olympus camera model depends on your photographic interests, intentions, and skill level. If you plan to shoot sports or birds, you’ll need an Olympus camera that provides high speed capture with equally adept autofocus. Want to keep things simple and uncomplicated? Check out one of Olympus’ beginner cameras. Need to take pictures around (or in) the pool or at the beach? There’s an underwater camera for you, too.

Despite their relatively small size, high-end Olympus cameras like the OM-D E-M1-series offer some of the best ruggedization and weather proofing around. Just know that the pro models really amp up the protection while the more consumer-oriented models don’t go quite as hard. If you’re planning to take your camera body up into the mountains or out into gnarly weather conditions, it’s worth paying extra for the burlier models.

One of the specifications to keep in mind when choosing the best Olympus digital camera is that the company’s mirrorless cameras pack Micro Four Thirds sensors, which create a 2x crop factor on lenses. That’s great news for photographers who want or need the extra reach from their lenses. It also translates to using shorter, lighter lenses for telephoto photography. For example, a 100mm-400mm lens delivers the same field of view as a 200mm-800 lens. And given Olympus digital cameras’ excellent in-body 5-axis image stabilization (IBIS) on some of their cameras, shooting telephoto and low light (slow shutter speed) images is not a problem.

At the same time, keep the 2x crop factor in mind when choosing a wide angle lens for landscapes or astrophotography.

The Olympus MZuiko Digital ED 7-14mm f/2.8 PRO lens ($1,349) is a good choice and delivers a 14mm-28mm 35mm-equivalent field of view. Sigma and Panasonic offer MFT lenses as well, so you have options other than the Olympus branded optics.

Why it made the cut: It handles like a pro DSLR and can churn out up to 18 fps with the electronic shutter mode making it our choice for the best Olympus professional camera.

Capturing photographs of athletes in action, dancers, birds and other fast moving subjects requires a camera with speedy response. The continuous number of frames per second that a camera can shoot is one key specification. At, say, five frames per second (fps) you may be able to freeze the motion of relatively slow action like a baseball player at bat or a ballerina moving leisurely from one position to the next but a bird in flight or a hockey player skating across the ice at breakneck speed will easily elude a slower fps rate. But at accelerated continuous shooting speeds, your odds of capturing great shot of peak action is vastly improved.

But high speed capture doesn’t mean much without continuous autofocus that’s fast (and accurate) enough to keep up with a camera’s burst rate. Keep in mind that at extreme shooting speeds, the camera may lock focus and exposure on the first shot rather than making continuous adjustments throughout the burst. Newer and higher end cameras sometimes provide special options to fine-tune how AF works when shooting different scenarios.

Whether you’re photographing birds in your backyard, athletes on the soccer field or race cars zipping around the track, the Olympus OM-D E-M1X keeps pace with up to 10fps shooting speed (18fps with the electronic shutter). Tweak autofocus sensitivity and choose the subject, such as cars or aircraft, for even better tracking. The camera is a bit large and pricey but handles action shooting very well.

Why it made the cut: A classically designed body wraps around modern imaging tech to create a stylish, capable camera.

Before everyone had a cell phone, small, point-and-shoots were the defacto entry level cameras. That category of digital camera has pretty much gone the way of the dinosaur. And that’s not all bad news because now even entry-level cameras offer features—like in-body image stabilization—that you’d never find on a point-and-shoot. At the same time, these more sophisticated models are snapshot easy to use. With one-touch shooting modes to match most picture-taking situations, entry level cameras can do all the work to make great photos.

At the same time, extra features, these cameras provide more room to grow than the early point-and-shoot models. That also makes them more capable than the best camera phones, especially under less than ideal shooting conditions. Of course you won’t want to give up selfies or posting on social media, so look for a flip LCD and Wi-Fi connectivity.

With its flip down selfie touchscreen and Wi-Fi/Bluetooth connectivity, this petite camera offers all the benefits of the camera phone in your pocket and a whole lot more. Although there’s no viewfinder, the best beginner Olympus camera, the PEN E-PL10 offers in-body image stabilization to help prevent blurry images when shooting in low light. And you’ll get 4K video, too.

Why it made the cut: With 4K video capture and a 5-axis image stabilization system that works during movie capture, this is the most well-rounded option for video shooters.

All camera manufacturers have upped their video features over the past few years, with most offering an option to shoot 4K. Not everyone needs the super-resolution of 4K.

In addition to resolution settings, look for a variety of fps, although you’re not likely to find as many fps options for 4K as for full HD, HD and SD. But it’s always good to have a choice of 30p, 24p and 60p. If you want to get creative, a slow motion feature is always fun.

Other specifications to consider include in-body image stabilization to keep your footage steady while you’re on the go. And having a microphone jack is key to getting the best sound. A headphone jack is a bonus but generally only found on high-end models.

In addition to 4K video, the Olympus OM-D E-M5 Mark III is the best Olympus camera for video because it’s equipped with IBIS (in-body image stabilization) to keep your footage smooth and steady. The camera has a mic jack so pick up an external microphone to ensure good audio. And, if you’re up to post-processing color grading, this camera has a flat profile so you can apply your preferred look and aesthetic.

Why it made the cut: Despite weighing just under a pound and sporting a super-small form factor, this full-featured mirrorless camera can do pretty much anything.

When you spend your hard-earned cash on a vacation, you want to be sure you come back with great images. Even when your outing doesn’t stray far from home, you’ll want to capture some of the sights you’ve visited for the day.

Naturally, size matters. You’ll likely be doing a lot of walking, so look for a smallish camera body and a lens that doesn’t add much to the size/weight of the rig but still gives you the focal length flexibility you’ll need. Although accessory flashes are available for mirrorless cameras,  having a built-in flash is preferable so it won’t add to the builk, weight or cost of your setup.

Weighing less than a pound (without a lens), this camera won’t weigh you down during your travel explorations. A built-in flash, 5-axis image stabilization and a tiltable LCD enable creative shooting angles.

Because it’s so small and weighs under a pound, you can attach a compact lens to it and have a walk-around camera that will fit in a purse or, if you’re feeling fun, a fanny pack making it our pick for the best Olympus travel camera.

Why it made the cut: You can literally take this 8x-zooming tough camera diving to a depth of 50 feet and capture 12-megapixel photos and 4K video.

The compact camera market has all but disappeared thanks to smartphones. But, the waterproof models have stuck around because they can go places your iPhone can’t. Olympus has been making its line of Tough cameras for more than a decade. The TG-6 is the best Olympus tough camera because it’s fully waterproof down to 50 feet and it also protects against dust getting into the delicate electronics.

It doesn’t just survive underwater, the TG-6 thrives there. It offers several underwater-specific shooting modes designed to overcome common challenges that come with shooting while submerged. For instance, it can remove some of the gnarly blue cast that can show up while diving. It can shoot 4K movies or lower the resolution to catch HD footage in slow motion. It’s great for really capturing your friends’ bad decisions so you can play them back later.

Q: Do professionals use Olympus cameras?

Yes, professionals use Olympus cameras. In fact, there are a number of Pro’s that are dedicated Olympus users including portrait and wedding photographers, wildlife and landscape specialists, as well as those who focus on other genres.

Q: What to look for when buying an Olympus camera?

Like any other camera shopping search, you should concentrate on the features and functions that best serve the type of photography that most interests you whether it’s sports, fine art, etc. Beyond that, take a look at some of Olympus’ special features like Live Composite (for night sky shooting and lightpainting).

Olympus mirrorless cameras don’t necessarily take better (or worse) pictures than other cameras. But Olympus offers some great features like 5-axis image stabilization, Live Composite and a host of creative filters in most of its models. Yeah, we often hear people say they like a photo we’ve taken and then credit the camera for the image. Keep in mind is merely a tool; the talent behind a great picture is you, the photographer.

The writers and editors at PopPhoto have collective decades of experience and have shot with every camera system under the sun. This list comes from a mixture of personal experience and community-based research. It also pulls from in-depth spec comparisons based on technical features.

The category-specific recommendations take into account the wants and needs of different kinds of photographers, but many of these bodies can work across genres.

With a wide variety of cameras, at a range of price points, Olympus has made it easy to find a model with the features and specifications you need to make great pictures. From speedy burst modes for wildlife and bird photography to excellent in-body image stabilization for low light/slow shutter speed shots and even a rugged camera that works under even the toughest of conditions, we’re sure there’s a model for you.