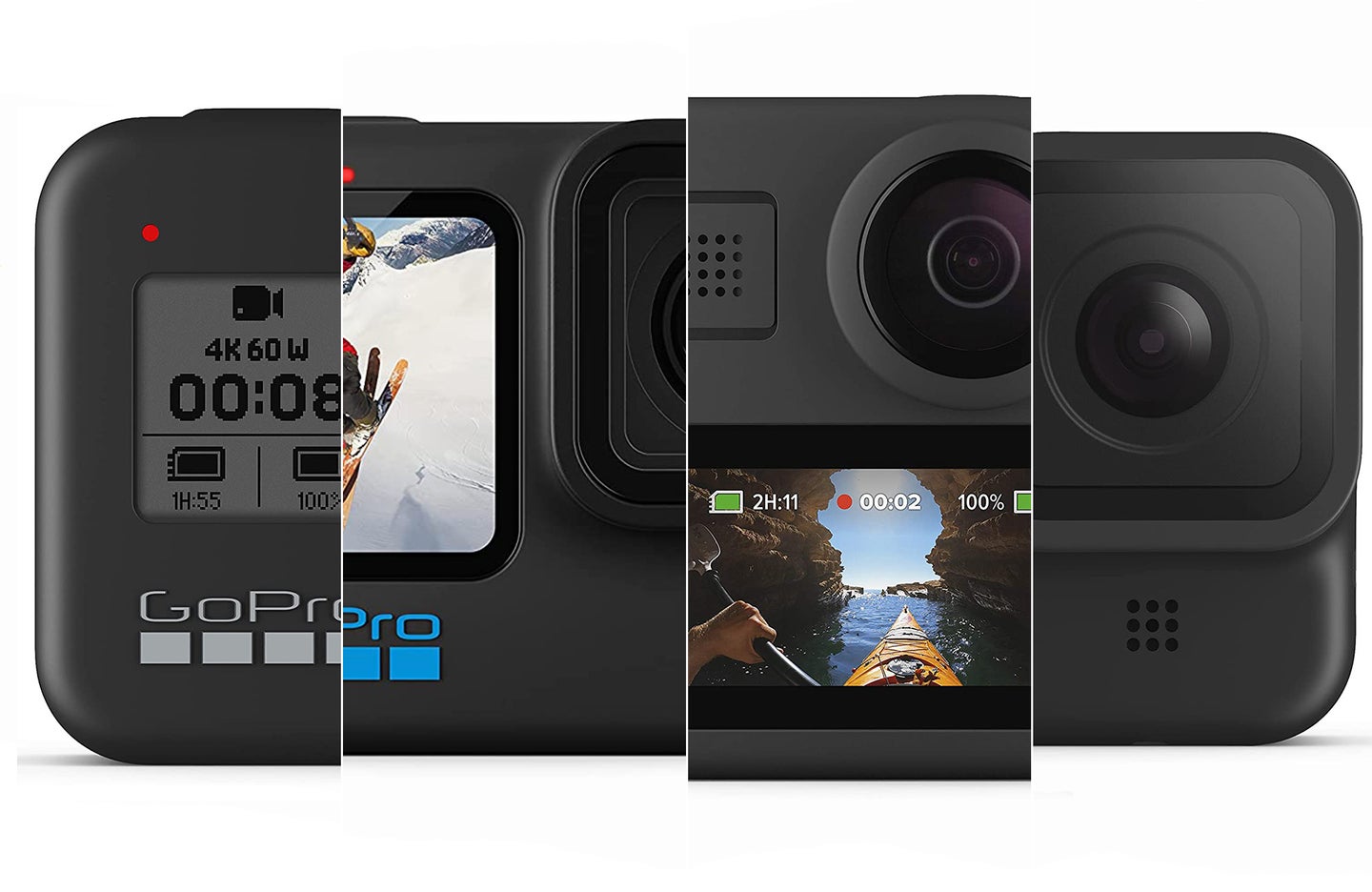 Choose the right GoPro camera for your specific style of shredding gnar.

GoPro cameras have been capturing gnarly footage for roughly two decades. In that time, these burly little boxes have advanced massively, bumping their photo and video chops to impressive levels. While the company tends to upgrade its flagship camera every year, it can be difficult to figure out which one is right for you. So, we have curated the best GoPros to meet your specific needs as a photographer, videographer, content creator, and gnar shredder.

While the differences can be subtle between generations, knowing what features you need and which ones you don’t could save you some money and make operating your new action camera a lot simpler. Here’s a breakdown of the best models for you.

I have been shooting photos and video for roughly two decades, during which I’ve tested–or at least shot with–most major camera releases. I was a competitive mountain biker for a decade, during which time I’ve used a GoPro to document my triumphs and my much-more-frequent catastrophes.

To curate this list, I relied on extensive hands-on testing with most of the models, as well as editorial review, and spec comparisons. While the spec sheets can be difficult to navigate, we have focused on singling out useful features rather than questionably practical bells and whistles that you’ll never end up turning on.

Things to consider when buying a GoPro

Peruse the GoPro lineup and you won’t find a ton of models. GoPro typically updates its flagship model every year with improved image quality and new software-driven features in order to justify an upgrade from the previous year’s model. Here are some key things to consider when you’re trying to determine the best GoPro for you.

It’s unlikely you have a screen with a resolution above 4K. The same goes for the people watching your content. Cameras all the way back to the Hero8 can record at least 4K, but the newer models go beyond that benchmark. While that extra resolution may seem like overkill, it can come in handy for things like cropping footage without losing out on image quality in the finished product. The most recent GoPro tops out at 5.3K, which provides a nice cropping cushion in case your frames aren’t super precise.

This spec is inexorably tied to resolution. The current flagship GoPro can capture 4K footage at 120 fps, which means it can shoot the most epic slow motion out of any camera in the GoPro lineup. At that resolution and framerate, though, you’re going to eat up a lot of battery and storage very quickly. So, it might be overkill if you’re not planning to max out your frames and pixels.

For a long time, the GoPro was stuck at around 12 megapixels for still capture. The Hero9 bumped that number up to 20 megapixels, and the current flagship goes all the way to 23 megapixels. While resolution isn’t everything, obviously, nearly doubling the number of pixels on the sensor does give you considerably more image data to work with for your photos.

Only the GoPro Max can shoot 360-degree video in the GoPro lineup, so if you want to slap on a VR headset and truly relive your hijinx, that’s the way to go for you. There are some solutions for linking several GoPro cameras together in order to capture 360-degree content, but that can get pricey and annoying quickly.

Once you’ve considered the specs you need out of a GoPro camera, it’s time to dig into the specific models. Here are our picks for the Best GoPros.

Why it made the cut: GoPro’s flagship model offers the most resolution at the highest frame rates in the same super-tough body.

If you’re looking for the greatest GoPro, you can typically also just look to its latest. The GoPro Hero10 Black offers upgrades across the board compared to its predecessor, though some updates are more minor than others. From a video standpoint, the Hero10 shoots 5.3K footage at up to 60 fps. It can also shoot up to 120 fps at 4K or 240 fps at 1080p. GoPro still hasn’t enabled an 8K mode in its cameras, but that likely wouldn’t be very practical for many users at the moment anyway. Plus, early Hero10 users complained of some overheating issues, which would only worsen by further increasing the overall resolution. GoPro has since remedied the issues with the Hero10.

Like every other GoPro in recent memory, the camera itself can go down to 33 feet underwater and resist bumps and bashes without the need for a protective case. It also uses the same mounting system GoPro has been using for generations, so its compatible with any old accessories you may have laying around from previous cameras.

GoPro upgraded the still photo capabilities, giving the Hero10 a 23-megapixel sensor, which is its highest yet. The Hero10 also offers the latest version of GoPro’s extremely impressive HyperSmooth technology, which takes the shake out of videos without the need for a mechanical stabilizer. HyperSmooth has been great since it debuted back in the GoPro 7 and the HyperSmooth 4 is even more effective and flexible than it ever has been.

The Hero10’s big advantage comes in the form of its new processor. It’s the most powerful chip GoPro has ever put in a camera, and it has a noticeable effect on overall image quality, especially in challenging situations with low light.

Simply put, the Hero10 has more features and better specs than any other camera in its family or even its category. It’s the action camera to buy for just about any activity if you don’t mind paying the premium price.

Why it made the cut: Because it’s only one generation older than the Hero10, the Hero9 doesn’t ask for much in the way of compromise.

Because it’s just one generation old, the GoPro Hero9 Black doesn’t stray much from the flagship Hero10’s stats. The Hero9 shoots 4K video at 60 fps, which is likely the most useful mode for most people right now. If you want to push the pixels, you can turn it up to 5K footage, but then you’ll only get 30 fps, which isn’t always ideal for fast action.

The Hero9 does offer HyperSmooth 3 for image stabilization, which seems nearly identical to HyperSmooth 4, at least in my personal experience with it. The Hero9 is every bit as tough as the Hero10, withstanding depths down to 33 feet and taking impacts without the need for an external case.

Pricing on these can vary, so be sure to check the price of the Hero9 and the Hero10 before you make your purchase. GoPro will sometimes offer its newest model for nearly the same price as its predecessor. Unless you need to absolutely max out your resolution, though, either the Hero9 and Hero10 should treat you just fine.

Why it made the cut: The oldest camera in GoPro’s current stable still has lots of life left in it.

It’s a little long in the tooth, but the oldest camera in GoPro’s current lineup still has lots of life left in it. It can shoot 4K video at up to 60 fps, which is the most useful setup for most people looking to capture action footage. It can even go to 240 fps at 1080p for 8x slow motion.

You will have to make a few concessions for stepping down, however. The photo resolution maxes out at a relatively paltry 12 megapixels and you can’t go over 4K for video, so cropping will result in quality loss.

Still, the Hero8’s specs include most of what the average shooter will want. It can live stream with HyperSmooth, just like the newer models, and it has a robust set of time lapse features baked right into it. If you can find a killer deal on one of these, it will be a great adventure companion for a long time.

Why it made the cut: It’s just as tough and has great image stabilization for less cash.

The GoPro Hero7 was a big leap over its predecessor. It introduced the now-standard 4K at 60 fps setting, which is ideal for action shots. It also marked the debut of GoPro’s HyperSmooth technology, which drastically improved the camera’s ability to negate shake in footage. Even during high-impact activities like snowboarding and mountain biking, HyperSmooth can churn out footage that won’t make you feel nauseated from motion sickness.

While the Hero7’s image quality takes a noticeable hit across the board compared to the current flagships, it’s still plenty beautiful and high-quality enough for YouTube and other online video platforms.

It doesn’t have a front-facing display, so it’s more reliant on the GoPro app, or you can just navigate through beeps and muscle memory like we all did before the front-facing screen became a thing.

This camera is typically less than half the price of a Hero9 or Hero10 on the secondary market, which makes it a lot less stressful to hand it to a kid before they go out to shred gnar on the ski hill.

Why it made the cut: It looks a little odd, but this model can act as three cameras in one.

If you want to truly immerse your viewers in footage of your adventures, this camera can create full-on VR shots they can view through interactive players and dedicated headsets.

The GoPro Max has a pair of lenses–one on the front and one on the back. Together, they can capture 6K 360-degree content that looks great through a headset. To go with the cameras, it has a total of 6 microphones positioned around the camera in order to capture 360-degree audio to match the visuals.

Despite its odd size and setup, the camera is still waterproof down to 16 feet without a case and its compatible with more that 30 mounting accessories to make it easy to wear or carry.

Even if you’re not shooting VR content, it’s a capable traditional action camera, which is handy if you want to capture your trip down the mountain but not the terrified look on your face as you descend.

Generally speaking, no, the GoPro’s overall image quality won’t exceed what you’ll get from a typical iPhone. You may get some extra resolution out of a GoPro, but the iPhone’s HDR functionality is above and beyond. That said, the GoPro can go many places your iPhone can’t, which means it can take photos you wouldn’t be able to capture with your phone.

Q: How long does a GoPro battery last?

It depends on what you’re doing with it. Battery life changes based on a number of factors, including the resolution that you’re recording at and the conditions in which you’re shooting. You could get a half hour of shooting at maximum resolution and high framerate in cold temperatures or you could get more than an hour. Regardless, we always recommend buying more batteries pretty much right away when you get your camera.

A final thought about the best GoPros

Your phone camera is pretty great right now, but a GoPro can go places you wouldn’t want to bring your pricy smart device. Any GoPro from recent generations will capture excellent video and photo quality while providing almost impossibly smooth footage regardless of your activity.

Whatever you do, we absolutely recommend that you buy at least one extra battery to go with your GoPro because they don’t always last that long and you don’t want to be stuck doing epic stuff without any proof of it for the internet. That’s the only way it counts, after all.