How to photograph grizzly bears without getting mauled

You're going to need a long lens. 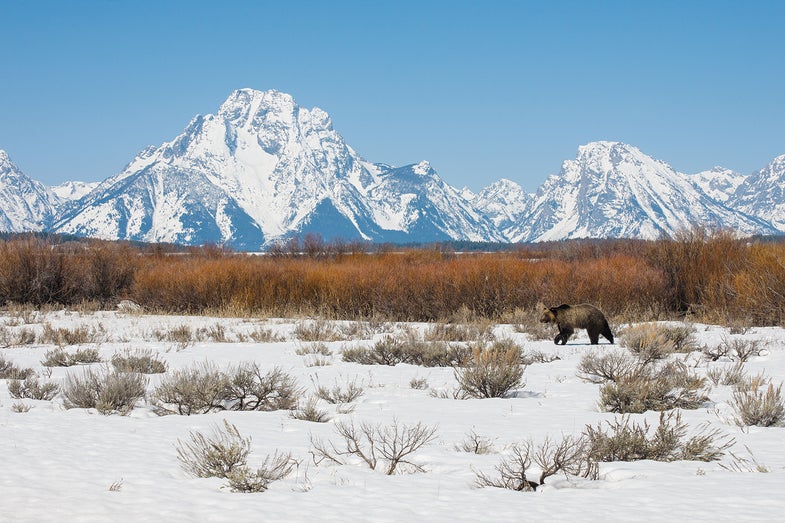 Tom Mangelsen has photographed wildlife from hummingbirds to elephants, but he has a special soft spot for bears. And he’s particularly fond of the grizzlies that roam Grand Teton National Park near his home in Jackson Hole, Wyoming. “The more I see bears, the more I feel for them, and their plight in a terribly crowded world,” Mangelsen says. “These bears in the parks are enjoyed by so many people—and the awareness the people come away with because they’ve seen these grand animals, it’s the highlight of their vacation most times.”

Mangelsen has produced or contributed to more than a dozen books on various wildlife species around the world. But in his forthcoming volume Grizzly: The Bears of Greater Yellowstone (Rizzoli, $60), he focuses on a single family of bears, all born and raised by a matriarch known only as 399. “She was the 399th bear that was tagged in the Greater Yellowstone ecosystem,” Mangelsen explains. “She’s as good a mom as you get. She’s raised several sets of cubs to adulthood—which is about two and a half years, when they go off on their own.”

In the Tetons, the 20-year-old 399 and her cubs are so accustomed to human tourists that they often scavenge for food near the park’s paved roads. “She has learned to negotiate between the human world and the bear world,” Mangelsen observes. “She knows it’s probably safer to be around humans and their vehicles than in the deep forest where big boars or male grizzlies may harm her cubs.”

As a result, 399 is something of a celebrity, perhaps the most famous bear in the Greater Yellowstone area. Mangelsen has studied and photographed her and her offspring for more than a decade, relying on key tools as an image-maker: discretion, patience, reflexes, and artistic opportunism.

The notion that grizzly bears are reckless killers is “a misconception,” Mangelsen says. “In the last dozen years or so there have been just ten fatal attacks by grizzlies in the U.S. But they can be dangerous, with the swipe of a paw or a bite that could kill an elk or a human.”

Bears are emotional, with varied personalities and tolerance levels around their cubs and prey. “Give them space,” Mangelsen advises. “The parks department has a 100-yard rule—about a football field of space. It’s almost unenforceable, but it’s a good idea.”

With safety in mind, Mangelsen relies on telephoto lenses, typically capturing grizzlies with a 600mm f/4G AF-S Nikkor ED VR mounted on his Nikon D4 (as in the portrait of 399 and cubs opposite). “I add extenders,” he notes, including 1.4X, 1.7X, and 2X AF-S teleconverters. He often photographs from the open window of his vehicle. “For support, you can use a beanbag in the car,” he says. “Outside, I use a tripod at least 90 percent of the time.”

Lucky shots result when—as the saying goes—preparation meets opportunity. “The secret of photography is trying to put yourself in a position for serendipity to happen,” Mangelsen says. “You have to constantly think about where to position yourself and how to maximize the background and light.”

A case in point: slide two, which features 399 and her two cubs on a fishing expedition, framed by the Grand Tetons and rolling clouds at sunrise. “I saw some coyotes who found a fishing hole,” Mangelsen recalls. “There was a mass die-off of suckers and trout, because the nearby dam water fell and they were trapped under ice. So I thought: If 399 finds these, she and her cubs are going to have a bonanza! And they did.”

The fishing hole also attracted other prey for the bears, such as otters and muskrats. Mangelsen sat back and waited, with an 18–200mm lens on his Nikon D2Xs to capture the landscape, including Mount Moran on the right and Oxbow Bend in the foreground.

It takes patience and persistence to match the light and the scene. “I select the place that corresponds with the mountain and the cloud cover, and just wait,” he says. “Or I will return day after day in that great morning and evening light. Some days I don’t see anything, or I’m in the wrong place, or beautiful clouds roll in but nothing happens. But if it does, you’re there.”

Some shots, on the other hand, require quick reflexes. At the same fishing hole, Mangelsen homed in on the bears. “I don’t try to depend on a decisive moment in a situation like this, because there’s too much action,” he recalls. “They’re clawing at the ice and dipping their heads in the water and pushing and shoving each other to get the fish.”

Such a scene calls for multiple frames at fast shutter speeds (1/400 sec here). “With my Nikon D4S, you can shoot 98 frames before the buffer fills up,” Mangelsen notes. “I try not to let the buffer fill up regardless of what camera I’m using. So I shoot 10 frames, wait a few seconds, shoot 10 frames and wait again. Or if something is really happening, I know I have 98 frames and I’ll quickly shoot all 98—then you have to let the buffer clear out. But with digital, you can snap away. There’s plenty of time to pick that one frame later.”

The key is getting out where the wild things are. “You’re not going to get anything sleeping in, or sitting at home or in the bar—or at the office for that matter,” Mangelsen says. “None of us own these animals, but we have a right to experience them in our national parks.”

The typical diet of grizzly bears includes many things—from ants to elk,  plants to salmon—but not people. Bears are usually apathetic toward humans. But two things can set them off: the search for food and the  protection of their young. Here’s how to avoid being one of the unlucky few.

Don’t tempt with food: “Keep a clean campsite,” Tom Mangelsen advises. “Don’t leave food around; hang it in a tree away from camp. Keep garbage in a tight container. If you’re cooking bacon or pork chops and you get grease on your clothes, don’t sleep in those clothes—put them in a bag and hang them too. Don’t feed bears, and don’t fight over prey if you’re a hunter.”

Leave the cubs alone: “Female bears are very protective of cubs,” Mangelsen says. Even the docile 399 once lashed out at a local jogger who alarmed her and her cubs on a trail at sunrise. “She bit him in the butt,” Mangelsen says. “He got too close to the cubs, and he knew he was in the wrong.”

Walk, don’t run: “If you’re face to face, don’t run from a bear, because that triggers a chase response,” Mangelsen says. “Walk away slowly. Just leave, maybe talk gently, and show the bear that you’re not a threat.”

Don’t be a hero: The protagonist of the Werner Herzog film Grizzly Man, Timothy Treadwell, was killed by a grizzly in 2003 while filming a documentary in Alaska. “I knew him,” Mangelsen recalls. “He was camping in the thick of it in the population of grizzlies, late in the season when there weren’t many salmon, and he had an encounter with a rogue bear. Tim was sort of an odd guy. He thought he was one with the bears. And he got a bit too familiar, let’s say.”