The new Tokina SZ 33mm f/1.2 is a fast, normal, manual focus prime that should cater to stills and video shooters alike. 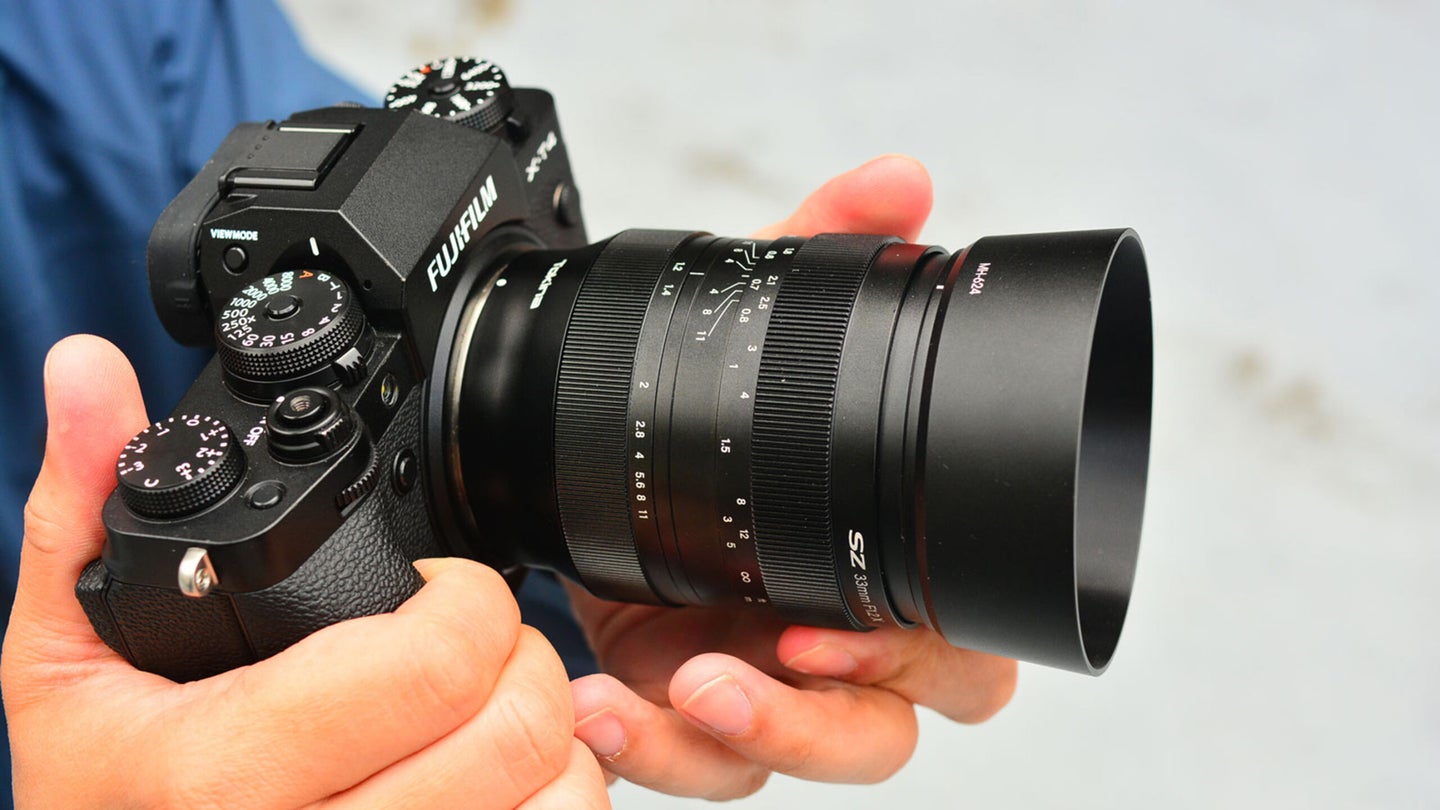 It’s proving to be quite a busy year for Japanese lens maker Tokina. It’s already launched a new 500mm f/8 mirror lens, an 8mm f/2.8 fisheye, a 2x extender to bundle with its existing 400mm f/8 mirror lens, and a T-mount to Canon EF-M mount adapter. Now it’s followed up with its fifth new product in as many months. Say hello to the new Tokina SZ 33mm f/1.2 lens for subframe Sony E- and Fujifilm X-mount cameras. It’s a brighter and more affordable alternative to the brand’s 33mm f/1.4 prime. The catch? You’ll need to put up with a lot more bulk and fewer modern conveniences.

Tokina seems to be placing its bets on video shooters or those who need both still/video capability in particular, as it has opted for a clickless aperture ring and is emphasizing features like suitability for follow-focus and moderate focus breathing in its marketing materials.

With that said, it’s also courting still shooters who favor manual controls. And thanks to its normal 50mm-equivalent focal length and bright f/1.2 maximum aperture, this lens could have applications from full-length or half-length portraits and weddings to landscape, street, travel, and astrophotography in particular.

The Tokina SZ 33mm f/1.2 has a smooth and sleek barrel encircled by two control rings and unencumbered by any other physical controls. The front ring caters to focus adjustment and has a long 160-degree throw which should make precise focus adjustments easier but will make quick-yet-smooth shifts in focus trickier, which could be a hindrance for video.

Like the earlier atx-m 33mm f/1.4, the barrel and control rings are made from an unspecified metal. Thanks to its brighter aperture, the new lens is both bigger and much heavier than the f/1.4 variant. With a length of 3.4 inches and a 2.8-inch barrel diameter, it’s about 0.6 inches longer and 0.2 inches wider than the earlier lens. The weight has more than doubled from just 10.1 ounces to 21.3 ounces, a difference that’s likely due in large part to the large front element.

While the front element is much more sizable, the overall optical formula has decreased in complexity a little. The earlier atx-m f/1.4 lens has 10 elements in nine groups, but the new SZ f/1.2 optic now has just nine elements in seven groups.

Tokina doesn’t list any exotic glass formulations or element types, but it does note that the large front element has allowed it to minimize vignetting. The company is also promising high contrast and resolution.

Looking to make the most of that f/1.2 maximum aperture, Tokina has increased the number of aperture blades used from nine in the earlier f/1.4 lens to 11 in the new f/1.2 lens. That difference should show itself in two ways: A rounder edge to bokeh from point light sources, especially when stopped down a little, as well as by adding more points to sunstars.

As noted previously, the aperture must be controlled entirely manually and Tokina has opted for a clickless design. That’s great for video as it allows for smooth aperture shifts which can help keep exposure in the ballpark or be used for creative effects.

Focus too is entirely manual. But unlike the f/1.4 version, the new f/1.2 model uses a telescoping focus design (i.e. the barrel gets longer/shorter while focusing). This style of design can lead to air (and potentially dust) being pumped through the barrel as you make focus adjustments.

Depth-of-field and hyperfocal scales are included, and Tokina says the lens’ design is also conducive to use with follow focus gear. Although the minimum focusing distance has increased from 15.7 inches in the f/1.4 lens to 19.7 inches in the f/1.2, the maximum magnification is unchanged at 0.1x (1:10).

Available from June 17th, the Tokina SZ 33mm f/1.2 is currently listed on Tokina USA’s website for $379 in both E-mount and X-mount versions. That represents a very minimal savings of just $20 over the $399 atx-m 33mm f/1.4 for Sony E-mount shooters, but Fujifilm X-mount shooters will see a healthier $50 savings over their variant of the earlier lens which currently sells for $429.