The new optic follows hot on the heels of last month's 400mm f/8, and provides quite a bit of reach, at what should be a reasonable price. 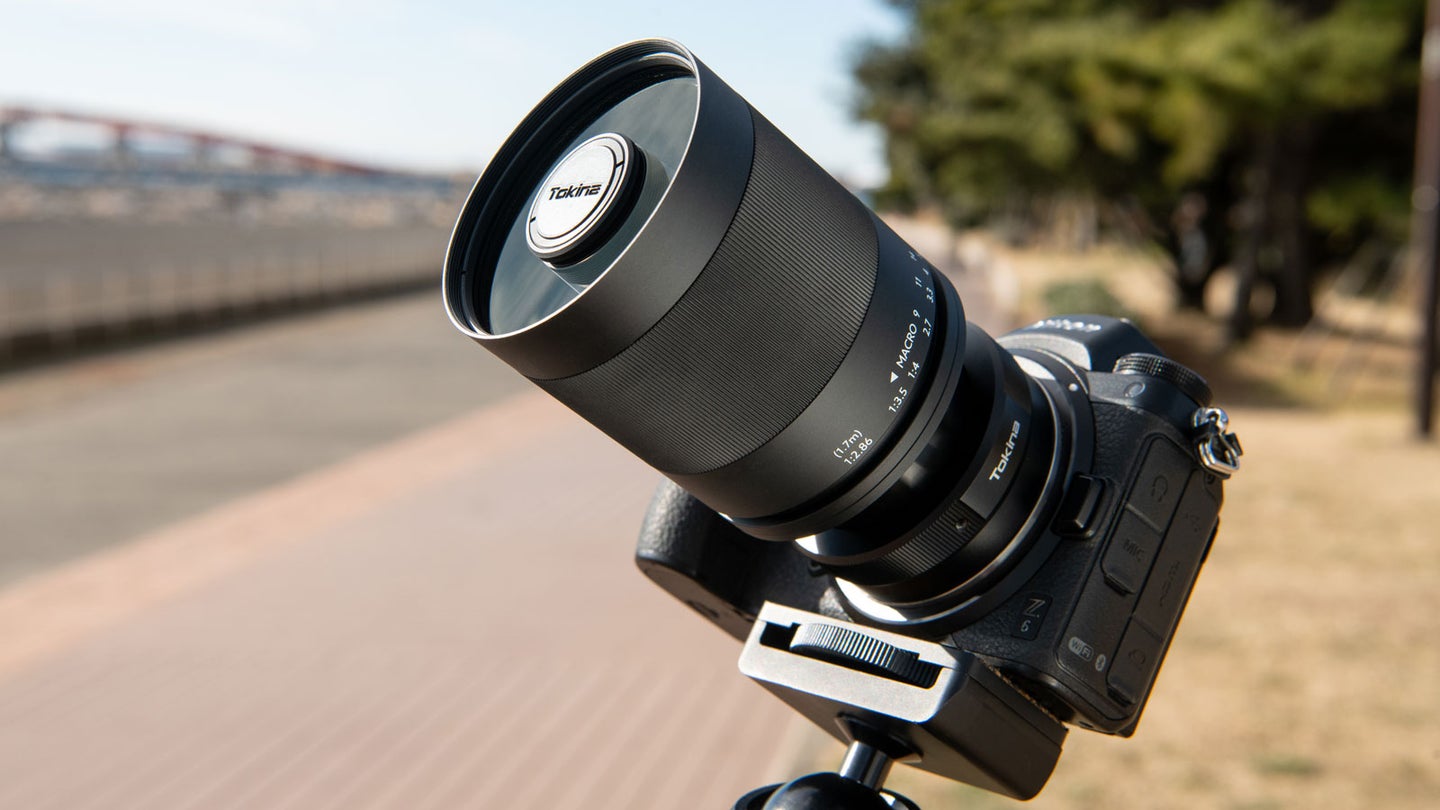 2022 looks set to be a good year for fans of mirror lenses. Last month, Japan’s Kenko Tokina announced the Kenko Mirror Lens 400mm f/8 N II, a refresh of its relatively recent 2020-model 400mm f/8 optic. Now, it’s following up with a 500mm f/8 prime that will give you even more telephoto reach for not much more heft.

Like last month’s reveal, the Tokina SZ Super Tele 500mm f/8 Reflex MF is a Japanese-made mirror lens. Set to ship in February, it’s likely to be very affordable (pricing info has yet to be revealed) and offer a lot of reach in a very small package. The lens will be available for a wide range of camera mounts, but its portability will come at the expense of some image quality as well as rather divisive donut-shaped bokeh. It also has a fixed-aperture, manual focus design.

Unlike last month’s 400mm, this isn’t a refresh of a recent lens. It’s been a while since Kenko Tokina has offered a 500mm mirror optic, although the company did sell several different 500mm f/6.3 and f/8 mirror options back in the analog era.

The eagle-eyed amongst you will have picked up on the fact that the new lens only bears the Tokina badge, whereas last month’s 400mm prime is instead being sold only under the Kenko name. The 500mm is also referred to as a reflex lens, whereas the 400mm is called a mirror lens, making for extremely inconsistent branding between two products that would both seem aimed at the same customer base.

What is a mirror lens?

For those who aren’t already familiar with mirror lenses, you’ll also hear them referred to as reflex or catadioptric lenses. In essence, they’re more akin to a telescope than a more typical telephoto lens.

Their compact size is achieved by folding the optical path back on itself repeatedly within the lens. The first fold is caused by a mirror towards the rear of the lens which redirects the light back forwards and focuses it on a second mirror that sits behind the center of the front lens element. This, in turn, redirects incoming light back through a hole in the center of the first mirror and onwards toward the camera’s image sensor.

This design allows for a much shorter, lighter lens than would otherwise be possible with a more traditional lens design. It also makes for a much more affordable optic, since creating mirrored glass elements is a much less complex process than molding and polishing refractive elements for a traditional lens.

Mirror lenses also tend to show much lower levels of chromatic and off-axis optical aberrations than refractive lenses. That’s due to the light being reflected off each mirrored surface rather than passing through them. This reduces opportunities for different wavelengths of light to be refracted differently.

The technique does, however, bring with it some disadvantages as well. First, mirror lenses are almost always focused manually. (One of the only exceptions is the Sony/Minolta AF Reflex 500mm f/8 lens.) They also tend to have lower levels of sharpness and contrast, compared to refractive optics, although post-processing can certainly help level the field a bit.

Perhaps the image quality concern that stands out the most with mirror lenses is their doughnut-shaped bokeh. Caused by the mirror behind the front lens element, the effect can give a business even to backgrounds with moderately high contrast. It’s particularly noticeable where you have strong specular highlights, which are rendered as bright, crisp doughnuts.

With the right subject, it can be an eye-catching and attractive trait. With the wrong one, though, it can be very distracting, drawing your attention away from your intended subject and onto the background.

One other important difference to note from a traditional refractive lens is that mirror lenses don’t offer adjustable apertures. What you see on the label is what you get in terms of aperture, and so there’s no control available over depth-of-field. Also, exposure control must be performed solely using the shutter speed and ISO sensitivity.

The primary target customer for the Tokina SZ 500mm f/8 will be photographers who’re looking to bring smaller, more distant subjects right up close, and who need to prioritize portability and cost over image quality.

That likely makes it of particular interest to enthusiastic amateurs wanting to shoot subjects like wildlife and sports. If your subjects will be varying in distance significantly, though, the lack of autofocus is quickly going to prove tiresome. You’ll thus want to consider the behavior of your particular subjects. There’s also some potential for light macro work or occasional portrait use.

Higher-end users who want the crispest-possible results and can afford the added cost and heft will want to look at a refractive lens instead. They still might want to pick up a lens like this for the artistic potential of its doughnut bokeh, though.

There’s really no name-brand competition for this lens

As for the competition, these days there’s not a lot of it. Mirror lenses used to be relatively easy to find even amongst the lens stock of first-party manufacturers, but that’s no longer the case. You will, however, find other 500mm f/8 mirror lenses available from brands Bower and Opteka. (Both also have 500mm f/6.3 units as well, which Tokina thus far lacks.)

Like the Bower and Opteka models, the Tokina 500mm uses a standard T-mount design, which allows it to be converted for use with a wide range of camera mounts. Interestingly, the size and weight of the Bower and Opteka lenses are close enough to be indistinguishable from that of the Tokina, which is 3.5-inches long, 2.9-inches wide, and weighs just 10.9 ounces (without an adapter attached). Both rivals are priced around the $100 mark without a T-mount adapter, suggesting the ballpark we should be expecting Tokina to hit. (Or given its greater brand recognition, perhaps aim a little above.)

It’s trickier to draw parallels against traditional refractive lenses because Tokina’s specs don’t include the size and weight of the required T-mount adapters, which vary significantly between mounts. (And unfortunately, the specs for the Kenko 400mm f/8 are only provided with a Canon EF-mount adapter attached, likewise stymieing direct comparisons.)

With that said, though, even remembering that you need to account for the weight of the adapter, it’s clear that mirror lenses are far cheaper, lighter, and smaller, than traditional lenses. By way of example, Nikon’s AF-S 500mm f/5.6E PF ED VR lens for DSLRs costs $3,600 and weighs close to five times as much. It’s also quite a bit larger.

Tokina doesn’t state the optical compositions of the individual elements in the lens, but the company does say that it has included elements with multi-coatings. The lens has a 72mm filter thread upfront and accepts 30.5mm filters at the rear, just like its Opteka rival. The Bower, meanwhile, only has the rear filter support.

A lens hood is included in the product bundle, but sadly it’s a screw-in type. We far prefer bayonet hoods as they’re quicker and easier to mount and can usually be stored neatly on the barrel in reverse. They also typically play better with filters and lens caps.

The Tokina SZ Super Tele 500mm f/8 Reflex MF goes on sale on February 18, 2022. Pricing for the new lens had not yet been disclosed at press time. The lens is available standalone as a T-mount optic for folks who already have the necessary adapter(s) for their gear. If not, six different bundles are available that include both the lens and the requisite adapter for Canon EF, Fujifilm X, Micro Four Thirds, Nikon F or Z, and Sony E-mounts.

Interestingly, Tokina’s site makes no mention of the Canon EF-M or Pentax K-mounts, even though the company sells T-mount adapters for both. Of course, T-mount adapters are available for far more mounts than just these. Tokina itself also offers Nikon 1 and Four-Thirds adapters, and third parties offer even more. So the range of mounts with which this lens can be used is extremely broad indeed.

Watch this space for more info on pricing as we hear it! More details can be found on the Tokina website.