The gargantuan black hole, Sagittarius A*, sits at the center of the Milky Way and is 4 million times larger than the Sun. 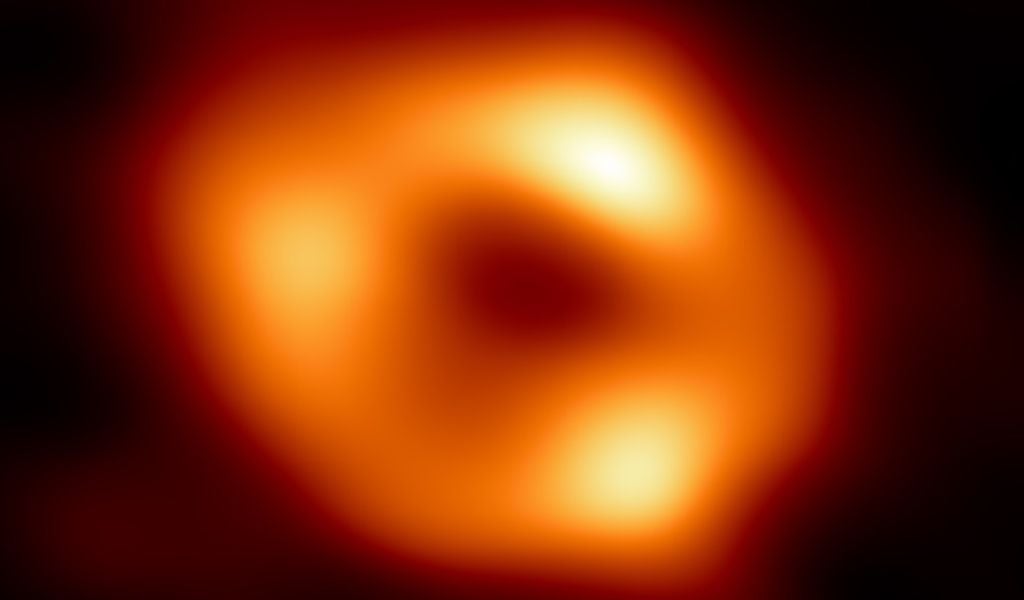 The first-ever photograph of the massive black hole Sagittarius A*. EHT Collaboration
SHARE

Scientists have long speculated about the existence of black holes. Albert Einstein originally predicted them in his theory of relativity and Roger Penrose developed mathematical formulas to explain their formation. But it wasn’t until 2019 that we saw our first photographic proof of a black hole, snapped in the M87 galaxy using the Event Horizon Telescope (an international collaboration of radio telescopes). Now that same telescope has been used to photograph Sagittarius A* (Sgr A*), a giant black hole located right smack in the center of our very own Milky Way.

Related: How scientists saw the ‘invisible’—and captured the first image of a black hole

The composite photo, which is the work (and victory) of over 300 researchers at 80 international institutions, is the very first picture of Sgr A*, ever.

For some time, scientists have suspected its existence and preemptively named it Sgr A*. Prior to the discovery, researchers predicted its size and shadow based on the movements of neighboring stars. Sgr A* is Earth’s closest supermassive black hole, at 25,640 light-years away.

Though Sgr A* is four million times larger than our sun, it’s still considered tiny in the parlance of black holes. Despite its comparatively small size, it was still challenging for scientists to get a good look, due to other objects crossing the viewing path.

However, the fact that they now have a view of it is significant. The black hole, surrounded by a ring of hydrogen gas, is located at the center of the Milky Way. And studying it could provide clues into how the galaxy formed and how it might evolve.

“From this imaging, we learn not only about our galaxy but also about how gas acts around black holes more generally, confirming models made back here on Earth,” writes Grace Malato of the National Science Foundation (NSF), one of the backers of the project.

The image consists of a fiery orange ring surrounding a dark spot. This spot is what scientists understand to be Sgr A*, effectively proving its existence. The image is a result of five years of data crunching on supercomputers, which included over 80 million central processing unit hours on the NSF-supported Frontera supercomputer and an additional 20 million hours on the Open Science Grid.

“The widespread collaboration was essential because each telescope has a different view from its place on Earth and therefore provides a unique contribution to the data set, which combines for a fuller view of Sgr A*,” Malato notes.

So what’s next? The possibilities are numerous but include the pursuit of even better images—and, maybe, videos. There are also hopes to deploy more radio telescopes worldwide, allowing scientists better views of more distant objects.