Here’s the first-ever direct image of a black hole

Wednesday was a big morning for astronomers. 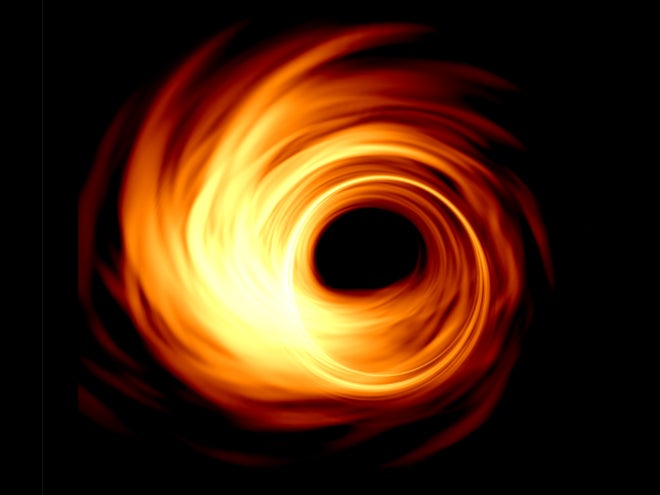 Update: On Wednesday morning, scientists unveiled the first ever picture of a black hole. See below for background info on this endeavor, and check back soon for more.

Black holes are a strange celestial phenomenon to describe. They exert gravity that’s so powerful, not even light can escape their grip. And despite how powerful our technology for observing space is these days, we’ve still never been able to snap a picture of a black hole—ever.

All of that is poised to change in less than 24 hours, thanks to the Event Horizon Telescope (EHT)—an eight-telescope project switched on in April 2017. Its mission: to peer out into space and attempt to snap the first-ever image of a black hole. The EHT has an announcement scheduled for Wednesday at 9:00 a.m. Eastern Time, and nearly everyone is expecting to hear that the project has successfully imaged Sagittarius A*, the supermassive black hole at the center of the Milky Way galaxy. Or, more specifically, that the project has imaged the black hole’s event horizon, the “point of no return” boundary beyond which nothing can escape the object’s gargantuan gravitational force.

The observatories involved weren’t tasked with taking a conventional photo of Sagittarius A*, which has the mass of 4 million suns. Instead, they were synchronized to observe radiation emitted by the event horizon’s bright ring of material, which could help illustrate the silhouette of the supermassive black hole itself. They were turned on for just nine days, but managed to collect a wallop of data that’s taken two years to transfer, process, and analyze in order to stitch together a visual (we hope) of the object itself.

This is a pretty tall order when we’re talking about an object that’s more than 25,000 light-years in the distance, but EHT has a resolution that can, as MIT puts it, “count the stitches on a baseball 8,000 miles away.” Combined, the eight telescopes boast an optical power 1,000-times that of the Hubble Space Telescope.

Imaging a black hole is a lot more consequential than just having something new to post to Instagram. “An image like this can affirm that Einstein’s general relativity is the correct theory to describe gravity when it is very strong, and can tell us about what actually happens around the black hole,” says Roger Blandford, a theoretical astrophysicist based at Stanford University who was not directly involved with EHT. “It’s the stage and the play.” It’s also a proof-of-concept for a type of technology and observational methodology that could push astronomy to new heights. “Success in making an image would allow the EHT project to go on to make more and finer images,” he says.

That’s assuming the announcement is what we’re all expecting it to be, but there’s no guarantee this will be the case. Not even journalists were given a sneak preview to the findings, so the entire world is expecting to learn about the EHT’s grand discovery all at once. You can watch the National Science Foundation’s livestream of the announcement (embedded above), and head over to read PopSci’s coverage of the findings shortly after.