From a golden Rollei 35 to a prolific Leica M3, the late queen loved photography, and these were some of her favorite models. 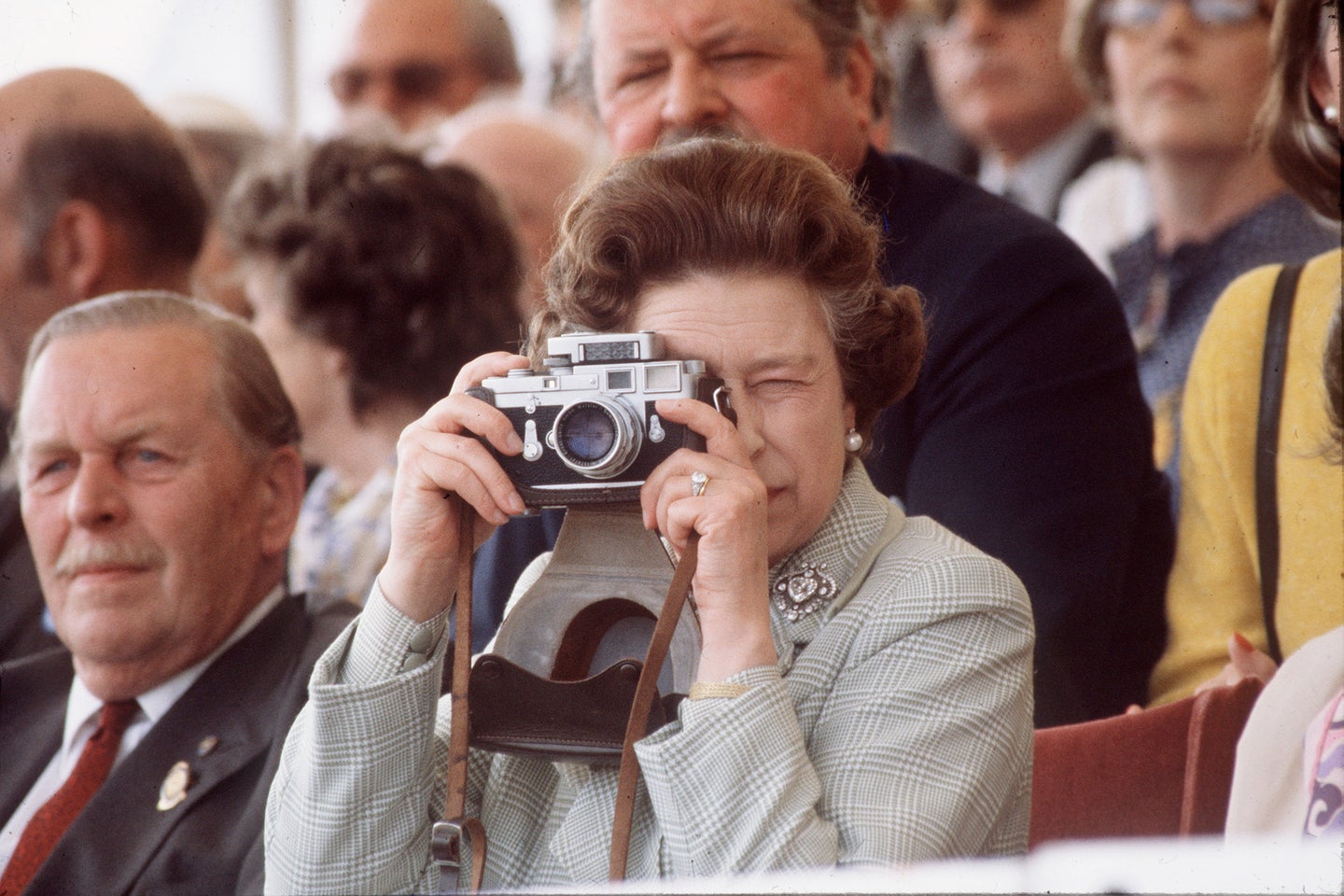 The queen taking a picture at the Royal Windsor Horse Show. May, 1982. Tim Graham Photo Library via Getty Images
SHARE

Queen Elizabeth II passed away today at the age of 96. One of the most photographed humans of the 20th century, her own passion for photography was no secret. The late British monarch was often documented with a camera in hand. In fact, images of her chatting up photographers and inspecting camera gear are plentiful.

To celebrate her life and passion for image-making, we’ve gathered together some of our favorite shots of Queen Elizabeth II, the photographer. Each shows her rocking a different camera, from a golden Rollei 35 to a vintage Kodak home movie camera—these are just some of the standouts from her royal collection.

Note: We couldn’t find any images of the late queen shooting with a digital camera—perhaps she was a film fanatic through and through? Let us know if you come across one, info@popphoto.com.

When it comes to the late queen’s favorite camera, we won’t speculate. But she was most often spotted handling a silver Leica M3 with an accessory lightmeter mounted on top. And for good reason, the M3 is an absolute classic, not to mention, a workhorse. And while trendy celebrities may tote Leicas these days for clout, Queen Elizabeth II was rocking one—and actually using it—decades prior. That’s a true icon.

At some point, though, it appears her majesty traded in the Leica M3 for a more modern Leica M6, which offers a built-in lightmeter, among other upgrades. Perhaps the move was simply a means to simplify her kit? After all, the two cameras share the same basic design. If so, there’s something oddly relatable about that.

Related: I’m obsessed with the Rollei 35 and haven’t picked anything else up in months

This is by far my favorite camera from her majesty’s collection (that I know of). Not only is the Rollei 35 famous for its design but to have it dripped out in gold is beyond legendary.

For those unfamiliar, this is one of the smallest 35mm film cameras ever made, and though it can be cumbersome to use (delicate fingers are a must), it’s capable of absolutely terrific results—truly a camera lover’s camera.

I must admit, this is an unexpected one. The above image was captured in May 2000, during an era when digital photography was just starting to give film a run for the money. However, as we now know, the late queen seemed keener on celluloid than silicon. So, rather than grab a state-of-the-art, 3-megapixel Canon Powershot G1, her majesty opted for a more humble Canon Sure Shot Tele 80 film camera.

Queen Elizabeth II wasn’t just a 35mm photographer, she also dabbled in medium format. And honestly, I can’t think of a more enjoyable medium format camera to shoot with than a Rolleiflex twin lens reflex (TLR). These are wonderful machines to handle, on par with Leicas, and owning one is a testament to any photographer’s excellent taste in gear.

Related: Everything you need to know to get started with Super 8 film

Finally, a movie camera: Though stills were clearly the late queen’s passion, she was also apparently fond of moviemaking. Here she is in 1953 shooting with the suitably named Kodak Royal, a 16mm, spring-motor-driven cinema camera.

And here’s another photo of her from 1965 with a different cinema camera. Always on the cutting edge, it’s cathartic to think about the late Queen of England nerding out on the latest tech and upgrading her kit accordingly, not just as a stills shooter but as a video enthusiast too.

From one camera nerd to another, Rest in Peace, Your Majesty.

Note: An earlier version of this article misidentified the format of the queen’s cine camera as 8mm.