This autofocus-equipped 85mm lens for full-frame Sony E-mount cameras comes in at less than half the price of its nearest rival. 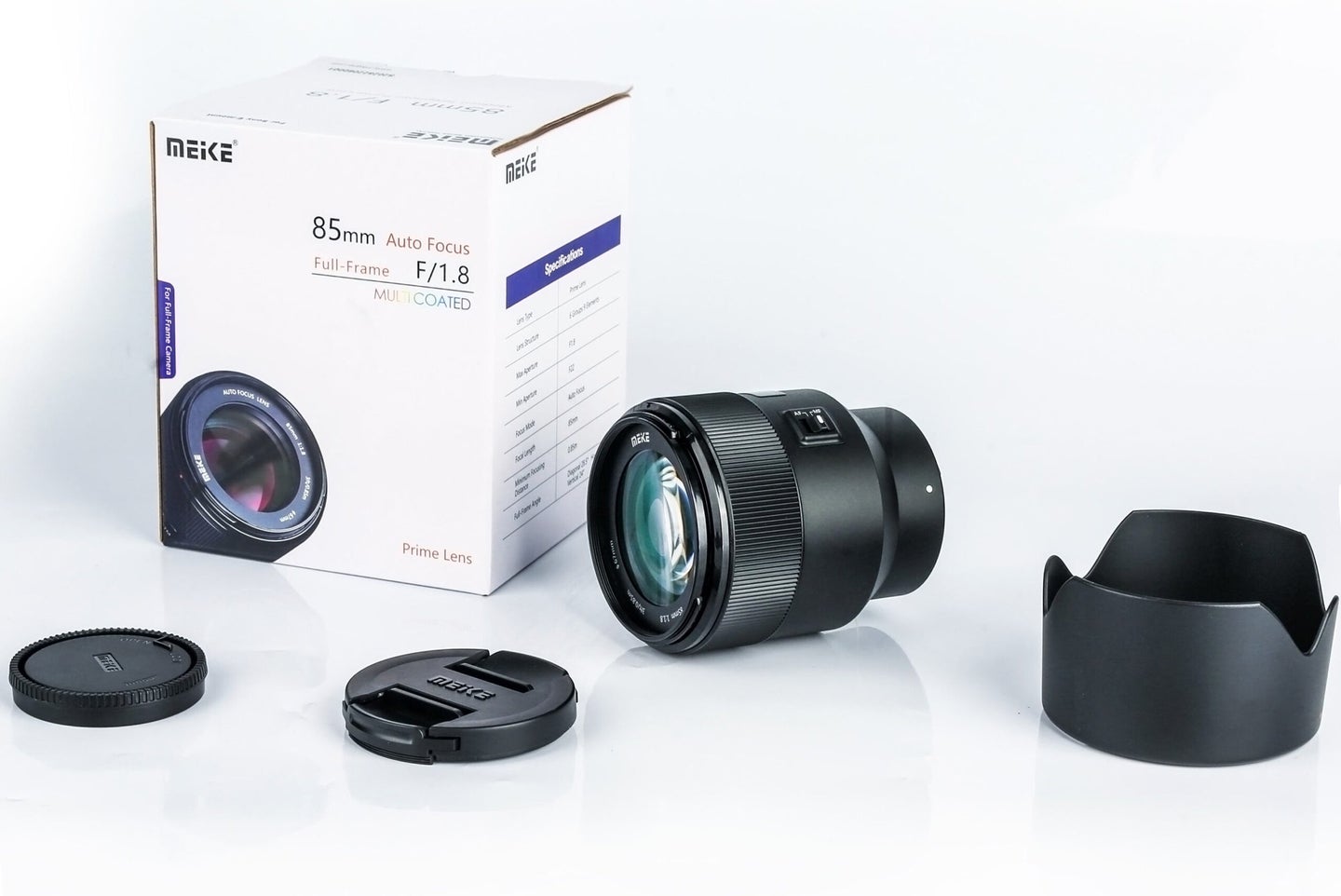 If you’re a full-frame, Sony E-mount shooter on a budget, Hong Kong-based lensmaker Meike has just the thing for you. The new Meike 85mm f/1.8 prime lens includes autofocus support and blows its sole direct rival out of the water when it comes to pricing.

While the Meike 85mm f/1.8 FF STM’s focal length and aperture make it ideally suited to full-frame, it will of course also work on sub-frame E-mount bodies. For Sony’s APS-C shooters or when using an APS-C crop on a full-frame body, it will yield an effective focal length of 128mm.

Related: Sony a7IV review: a solid all-arounder for every shooter

Thanks to its medium telephoto focal length and bright f/1.8 maximum aperture, the Meike 85mm f/1.8 will be particularly interesting to portrait shooters. As well as portraiture, Meike is also aiming the new lens at architectural and landscape photography.

Unfortunately, while it listed a barrel diameter and weight, Meike hasn’t stated a barrel length for its new lens. As we’ll see in a minute, though, it’s likely around three inches in length with a 3.1-inch diameter and weighs 13.6 ounces. That’s just a bit smaller than the Tokina, which has the same barrel diameter but is 3.7 inches long and weighs 22.8 ounces. And not surprisingly, all of the f/1.4 lenses are even bulkier.

Meike also missed stating the material used to construct its lens barrel, which is cleanly designed with just two physical controls. Up front is the manual focus ring, and behind it, you’ll find a focus mode selector switch on the left side of the lens barrel. Just as in its Tokina rival, there’s no weather-sealing here. You’ll need to step up to the Rokinon, Samyang, Sigma, or Sony for that, but it’s an omission that’s very easy to overlook given the Meike’s budget price tag.

The front of the lens barrel is threaded to accept 67mm filters and accessories. The lens is firmware-upgradable via a micro USB port which is to be found neatly hidden within its metal lens mount.

Just like the Tokina and Sigma, Meike has opted for a more budget-conscious, stepper motor-driven autofocus system for the 85mm f1.8 FF STM. The Rokinon, Samyang, and Sony, meanwhile, use linear ultrasonic motors which typically provide greater performance. Focusing is possible to a minimum distance of 2.8 feet for a maximum magnification of 0.13x.

The reason for the lens’ affordability can likely be found in its optical formula. For one thing, with just nine elements in six groups, it’s the simplest of the group. The Tokina has one extra element and group, while the Rokinon, Samyang, and Sony add two elements and groups apiece. By far the most complex is the Sigma, though. With 15 elements in 11 groups, it’s nearing double the complexity of the Meike.

But that’s not the whole story of this lens’ value. It’s also worth noting that if you look in the company’s back catalog, this isn’t its first 85mm f/1.8 with nine elements in six groups, and all the other basic specs look to line up nicely as well. That suggests the new E-mount 85mm f/1.8 FF STM has inherited its design largely or entirely from the earlier 85mm f/1.8 AF for Canon EF and Nikon F-mount DSLRs.

Of course, tweaks *could* have been made to the optical formula. Certainly, Meike mentions improved colors thanks to dual-sided, multi-layer coatings on lens elements for this optic, something it didn’t state for either DSLR lens. And while the text has the feel of a somewhat dubious translation, it also appears to suggest the front lens element sports a dust and smudge-resistant coating.

Meike has opted for a nine-bladed aperture iris for the 85mm f/1.8, which is the same number of blades used by the Rokinon, Samyang, and Tokina. Both the Sigma and Sony lenses have two additional blades, and their 11-bladed apertures should yield rounder bokeh, especially when stopped down somewhat.

That makes the Meike hands-down the most affordable AF-capable 85mm for full-frame E-mount, as of this writing.