This new all-manual lens is available in a wide range of mirrorless mounts for a reasonable $250. 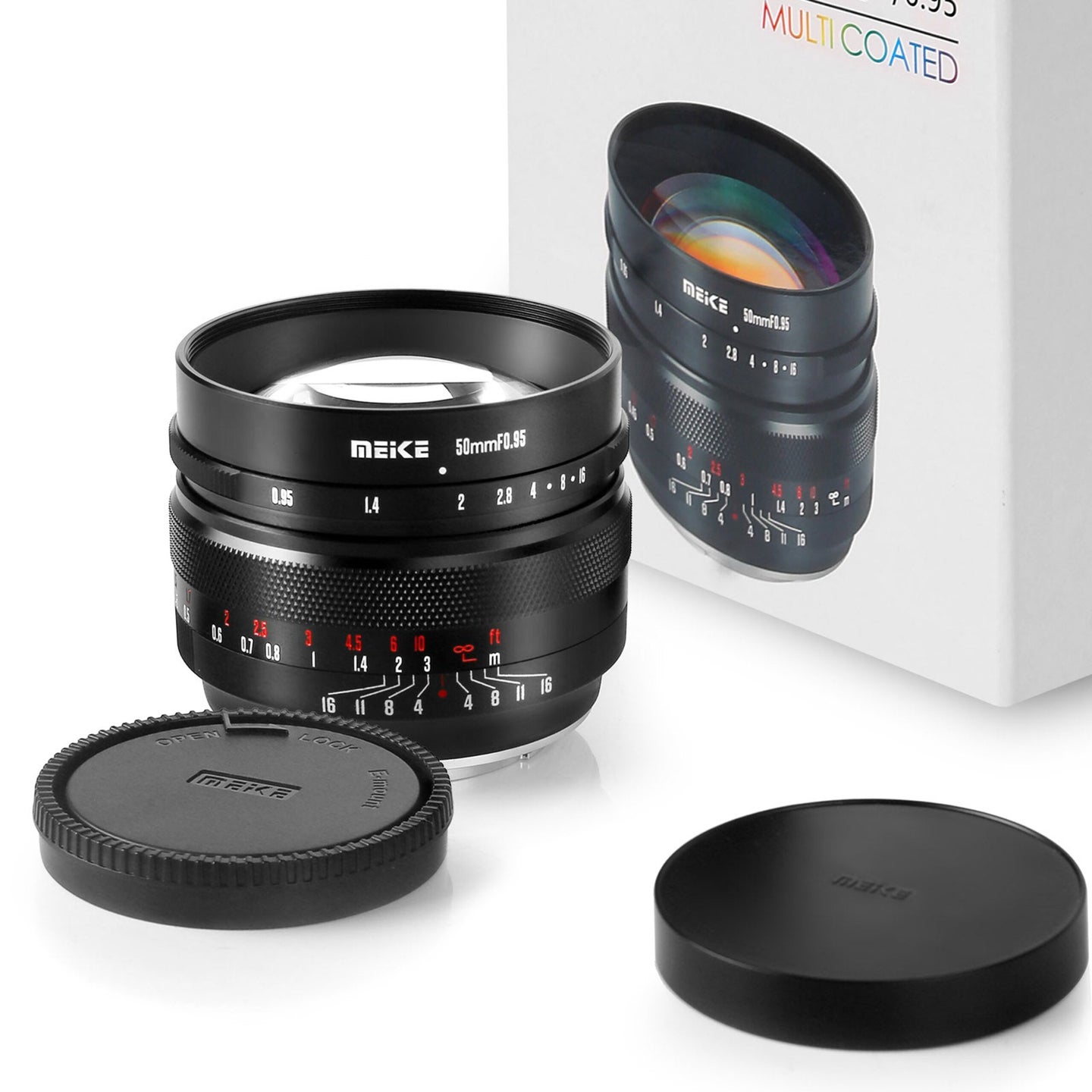 It’s proving to be a rather active summer for the folks at Hong Kong’s home-grown lens brand, Meike. We’re barely through telling you about the brand-new Meike 85mm f/1.8 for full-frame Sony E-mount cameras, and the company has already launched another optic, this time for five different sub-frame mirrorless lines. Meet the new Meike 50mm f/0.95.

The new 50mm f/0.95 lens will yield a 35mm-equivalent focal length of about 75mm for Fujifilm, Nikon, and Sony shooters, 80mm for Canon shooters, and 100mm for those using Micro Four Thirds cameras. It will also face significantly more competition than the aforementioned 85mm, with at least two direct rivals on every available lens mount.

Thanks to its focal length and extremely bright maximum aperture, the Meike 50mm f0.95 should prove useful for situations where you want to isolate your subject from the background and/or foreground, such as in portraiture. This coupled with a very affordable price tag could make it an appealing option, so long as you’re willing to live with its entirely manual design.

On every single mount, direct competitors include the 7artisans 50mm f/0.95 and TTArtisan 50mm f/0.95 lenses, although it’s the former which is by far the nearest rival. For Canon EF-M, Fujifilm X, and Micro Four Thirds shooters those are also the main alternatives, though the Voigtlander Nokton 42.5mm f/0.95 and 60mm f/0.95 are at least in the same ballpark for Micro Four Thirds, albeit at double the price and with much more bulk.

Nikon Z and Sony E shooters, meanwhile, may also see it as a rival to the nearly-as-bright, full-frame-friendly 7artisans 50mm f/1.05, which is nearly 40% more affordable and offers a much more portable design. All other rivals on every mount are at least triple the price of the Meike, though, and in some cases also come equipped with modern conveniences like autofocus and electronic aperture control.

Unfortunately, Meike has yet to reveal the dimensions of its new optic, and so all we have to go on are its weight and filter size plus a visual estimation of the dimensions. With that said, the Meike 50mm f/0.95 tips the scales at 14.8 ounces and sports 62mm filter threads afront a barrel which is likely somewhere near a 2.5-inch diameter. The mount appears to be metal but otherwise, the materials are unstated.

That’s exactly the same weight and filter size as the 7Artisans 50mm f0.95, which measures 2.3 inches long, and is likely pretty similar in its dimensions as well. Among other rivals, the Voigtlander 42.5mm f/0.95 is the closest in terms of weight, but it’s still fully one-third heavier.

Next up on the list, the 7Artisans 50mm f/1.05 is a touch heavier again and has by far the longest barrel of the group. Then there’s a big step up in weight to the TTArtisan 50mm f/0.95 which is two-thirds heavier than the Meike. Finally, the Voigtlander 60mm f/0.95 is by far the heaviest of the bunch.

The manual focus ring of the Meike 50mm f/0.95 is mechanically connected and will allow the lens to focus to a minimum distance of just 18 inches. That equates to a weak macro performance of 0.15x or 1:6.9, just fractionally better than the 7Artisans 50mm f/0.95 which focuses from two inches further back.

You’d need to be fractionally further away again for the 7Artisans f/1.05 and TTArtisan lenses, but both Voigtlanders will focus far closer than the rest of the group and allow up to 0.25x (1:4) magnification.

Meike’s new lens features a total of seven lens elements in five groups, and if there are any exotic element types or coatings used, the company doesn’t mention this. Also sitting in the optical path of both 7Artisans lenses is a 13-bladed aperture that can be stopped down to f/16. Again, all of these specs are identical to those of the 7Artisans 50mm f/0.95.

The other lenses all blow this out of the water for optical complexity, with 11 elements in eight groups for all but the 7Artisans f/1.05, which has 10 elements in 7 groups. With a 14-bladed aperture, the TTArtisan 50mm f/0.95 should yield the roundest bokeh when stopped down a little, while both Voigtlanders surprisingly skimp on 10-bladed apertures despite their much higher price tags.

Available immediately for all but Nikon Z-mount customers, the Meike 50mm f/0.95 is priced at $250. No planned availability date has yet been revealed for the Nikon-mount version. The Meike’s nearest rival, the 7Artisans 50mm f/0.95, is just a tad more affordable at $236 list, but every other rival has a list price of at least double to triple as much as the Meike.