Can AI create art? A winning submission has the creative community up in arms. 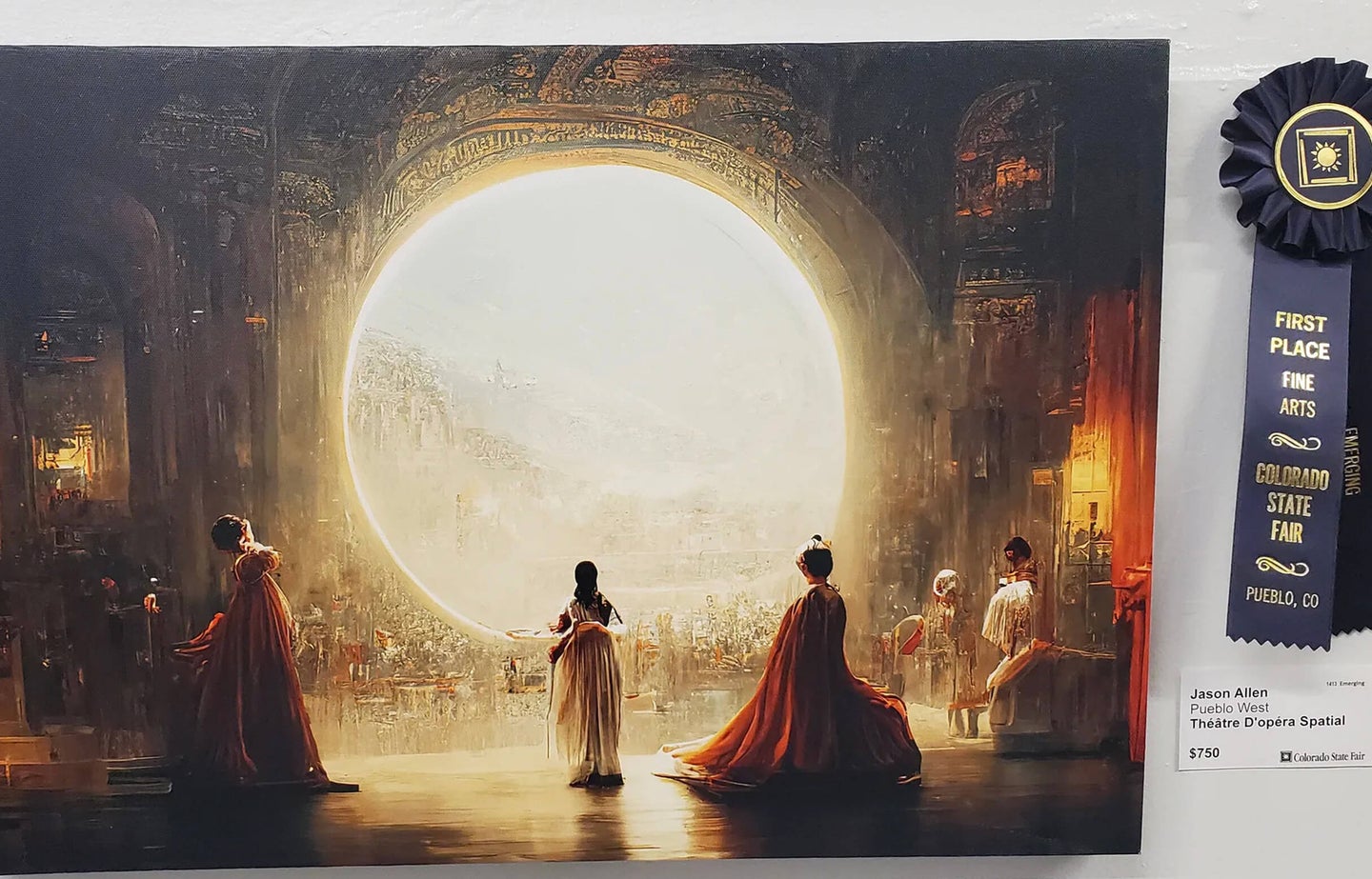 For centuries, innovation has challenged the way society defines art. Artists including pointillism pioneer Georges Seurat and Paul Signac were among the founders of the Paris-based Salon des Indépendants in 1884 who were revolting against the traditional, government-backed Paris Salon. When photography made its debut, it too was criticized as too technical to be a fine-art form. The same happened, to a degree, when digital photography burst onto the scene. And now, the 21st-century equivalent has arrived. At the center is a creator named Jason Allen, whose AI-generated artwork took first prize at the Colorado State Fair—and is causing an uproar in the creative community.

Related: These landscape ‘photos’ were generated by AI

The ‘artwork’ in question

Allen used the AI image synthesizer Midjourney to generate his winning series, “Théâtre D’opéra Spatial.” The canvases, which depict rich, Baroque opera scenes with an otherworldly, intergalactic twist, won first place in the Amateur division of the Digital Art category at the Colorado State Fair. Allen celebrated by sharing the news on Midjourney’s Discord server (which is down as of publishing), and it was later picked up on Twitter. The feedback was not all positive, compelling Allen to clarify his intent:

“I wanted to make a statement using artificial intelligence artwork,” Allen told The Pueblo Chieftain. “I feel like I accomplished that, and I’m not going to apologize for it.”

As news of Allen’s victory spread, the internet had some strong words in reaction. Particularly, many comments made the argument that his victory was disparaging the efforts of human creators.

“We’re watching the death of artistry unfold right before our eyes—if creative jobs aren’t safe from machines, then even high-skilled jobs are in danger of becoming obsolete. What will we have then?” wrote one Twitter user.

Another argued that work produced by AI isn’t really art at all.

“AI cannot create art, because anything generated from an AI is entirely devoid of messages, themes, and meaning. There is no intentional conveyance on the part of the ‘artist’ if said artist isn’t actively thinking about the message of their work. Which I doubt the AI does.” @TarouN17 tweeted.

Related: The state of AI in your favorite photo editing apps

On the other hand, one user likened AI image generation to photography. Though a machine is involved, the human element gives it an artistic spin.

“I don’t see a problem with this. Not sure how this is that different from photography. [The] person spent weeks refining the input and then combed through hundreds of options to arrive at the ‘best’ ones. That requires subjective art experience. It’s not like the AI did it on its own,” Ben Rhoades wrote in the thread.

What will happen to the submission?

According to The Pueblo Chieftan, Allen made it explicitly clear that he employed Midjourney in the creation of “Théâtre D’opéra Spatial.” And, according to a preliminary review, he didn’t break any rules. The guidelines for the Digital Art/Digitally Manipulated Photography category state that artwork can be defined as a “(Digital Arts) Artistic practice that uses digital technology as part of the creative or presentation process. (Digitally-Manipulated Photography) Digitally editing a photograph more than 10%.”

Fair rules state that anyone can file a grievance against a submission, however, they must file a $300 bond, detail the rules violated, and serve the letter in person. Presently, nothing has been filed.

“This is a broader conversation about how do we decide what art is and how do we judge it appropriately?” Director of Communications for the Colorado Department of Agriculture Olga Robak told the newspaper.

“A lot of people are saying, ‘AI is never going to take over creative jobs, that’s never going to be something that artists and sculptors have to worry about.’ And here we are smack in the middle of it, dealing with it right now,” Allen stated. “Maybe, ultimately, the hate and animosity is stemming from fear. Artists are scared. They’re worried that they’re going to be replaced by the robot.”

Like its predecessors, AI will have to fight for recognition as an art form. It also begs the question, what makes something “art?” Is it the physicality of creating something by hand? The conception of the idea? With the advent of photography, painters, too, wondered if they would be out of a job—but on photography’s heels came the explosion of Modernism and the world of Picasso, Braque, and others who would transform the way the world defined artistic expression. It remains to be seen how artificial intelligence will impact the field.

What do you think? Send a note to info@popphoto.com and share your thoughts.