Known as the Hixon Compact Group 40, it’s long been a source of fascination and information for astronomers. 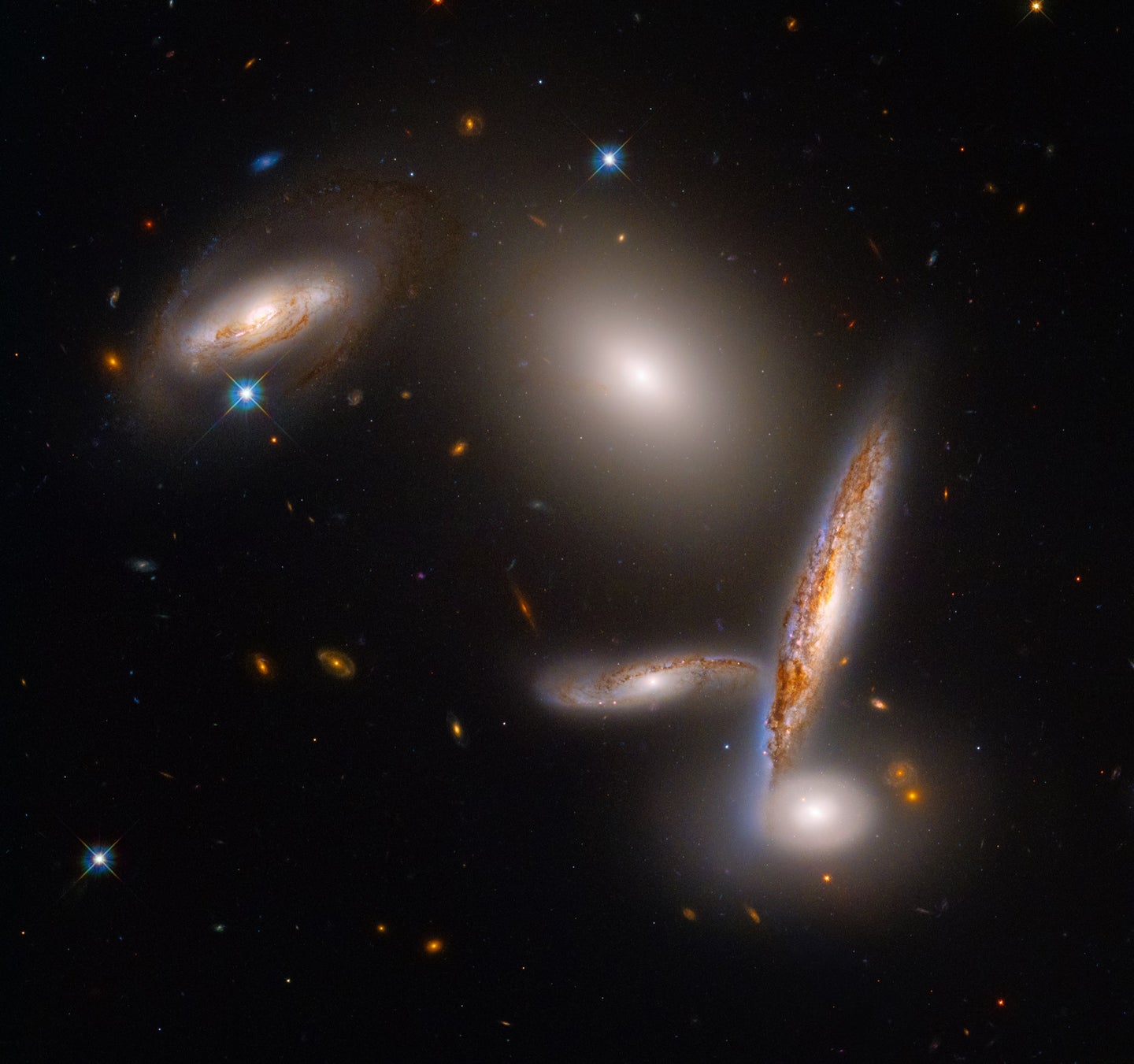 To mark the Hubble Space Telescope’s 32nd birthday, NASA recently shared an image that shows off the optic’s might. The shot showcases five close-knit galaxies, a cluster known as the Hixon Compact Group 40.

“Caught in a leisurely gravitational dance, the whole group is so crowded that it could fit within a region of space that is less than twice the diameter of our Milky Way’s stellar disk,” NASA writes.

The group consists of three spiral-shaped, one elliptical, and one lenticular (lens-like) galaxy. NASA notes that it’s not unusual for the bodies to cluster, but the Hixon group is notable in that it is fairly isolated. Normally, we might find congregations at the center of much larger clusters.

Dark matter keeps the galaxies in a dance

So what is pulling the galaxies together? One possible explanation is the presence of dark matter—as-yet unseen mass that astrophysics calculations say is essential for the universe to work as it does. NASA speculates that the galaxies have a lot of dark matter, which exerts gravitational forces that causes them to pull towards each other.

“As the galaxies plow through the dark matter they feel a resistive force due to its gravitational effects,” the agency explains. “This slows their motion and makes the galaxies lose energy, so they fall together.”

Hixon won’t stay this way forever, though. In about a billion years, the group will merge into a giant elliptical galaxy.

Astronomers have studied this group in visible light, as well as with radio, infrared, and X-ray wavelengths, with each study yielding a new set of information.

They’ve found that most of the galaxies have a compact radio source at their cores, suggesting the presence of supermassive black holes. X-ray observations indicate that an abundance of hot gas leads the galaxies to interact, while infrared studies have aided in determining the rate of new star formation.

“Though over 100 such compact galaxy groups have been cataloged in sky surveys going back several decades, Hickson Compact Group 40 is one of the most densely packed,” NASA’s materials state. “Observations suggest that such tight groups may have been more abundant in the early universe and provided fuel for powering black holes, known as quasars, whose light from superheated infalling material blazed across space. Studying the details of galaxies in nearby groups like this help astronomers sort out when and where galaxies assembled themselves, and what they are assembled from.”

“I remember seeing this on a sky survey and saying, ‘wow look at that!'” says Paul Hickson of the University of British Columbia, Vancouver, Canada, to NASA.