You can now run Photoshop in your Web browser

Still in beta, 'Photoshop on the Web' allows users to make light edits to their images and collaborate with our creative stakeholders. 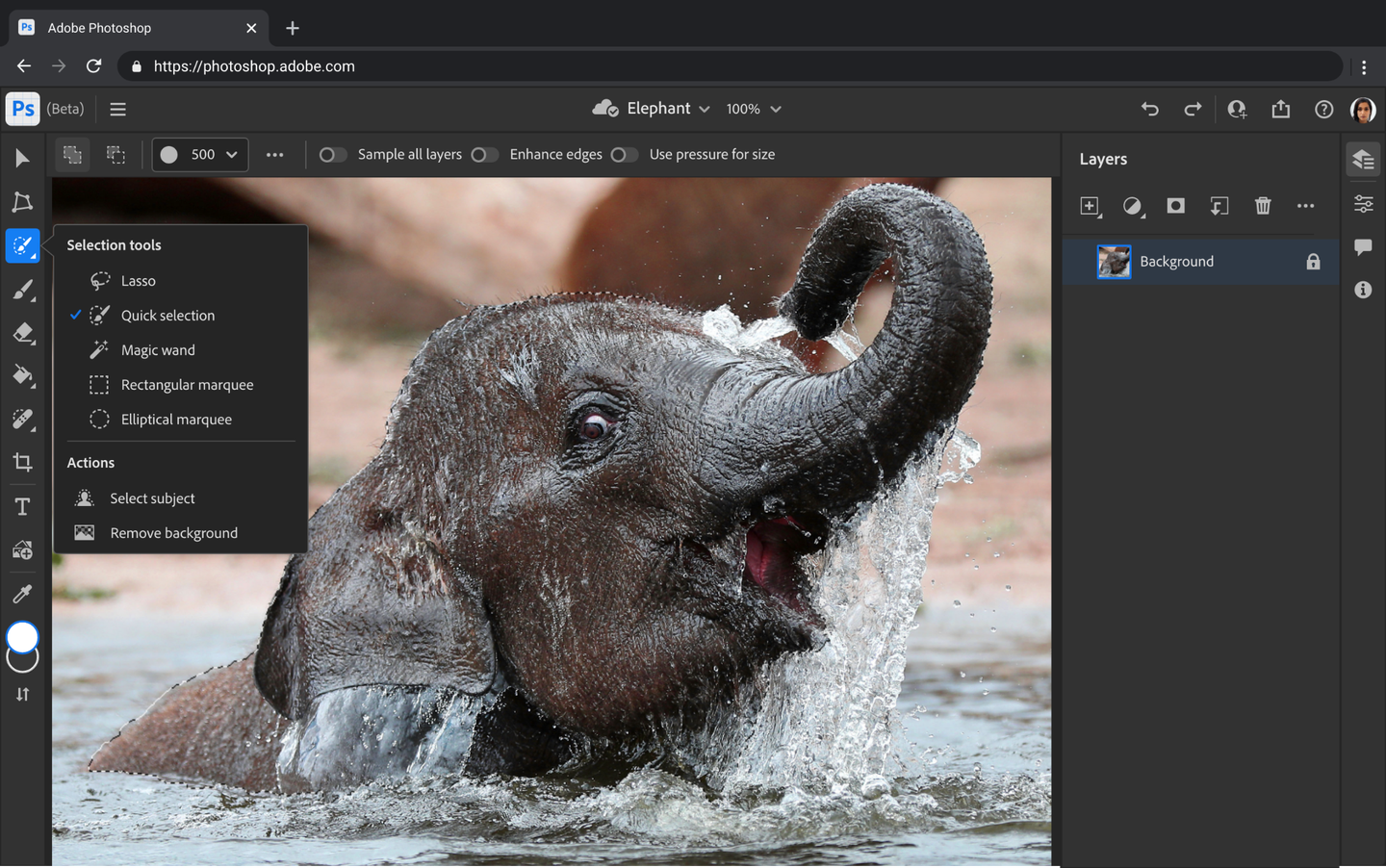 "Photoshop on the Web" is still in beta and limited in its feature set. But the concept is still really cool. Adobe
SHARE

Adobe’s annual MAX conference is going on at the moment, which means a whole slew of fresh features have just been released for Photoshop, Lightroom, and the other Creative Cloud apps. We’ve read through all the press releases, watched all the videos, and these are the things we’re most excited about.

Adobe has just announced a “Photoshop on the Web” beta as part of a number of collaboration-focused, web-based features it’s bringing to the Creative Cloud. The beta is rough around the edges, has a limited feature set, and, so far, is only supported in Google Chrome and Microsoft Edge. But it’s still a pretty big deal.

Adobe is recognizing that a lot of creative work isn’t done in isolation. And that many creatives solicit feedback from other “stakeholders,” like clients and art directors. To make the whole feedback process easier, you can now share a Photoshop “Cloud document” with these collaborators. And they can add comments, notes, and suggestions straight to the document from their browser, without having to download or signup for anything.

Additionally, the Photoshop on the Web beta will allow users to make some simple editing adjustments. Adobe says they’re “starting with workflows for retouching and adjusting images,” and will add more features from there.

We’ve had a play around with the beta and it’s Photoshop alright. Some common features, like “curves”, aren’t supported yet. But you can still do things like make selections, add layer masks, and adjust the brightness, contrast, and color of your images. We wouldn’t want to make a full composite using it, but it works as promised—and this is just the first beta.

Adobe Camera RAW and Smart Objects on the iPad

On the subject of Adobe making Photoshop more powerful on other devices, the Adobe Camera RAW plug-in and Smart Objects are now available in Photoshop for iPad. While you could previously process your RAW files using Lightroom for iPad, this is still a nice addition and makes for a more streamlined workflow. Also, Smart Objects make it much easier to work non-destructively.

Both updates bring the iPad version of Photoshop closer to parity with the desktop version.

Adobe is continuing to double down on AI-powered tools. The updated Object Selection Tool now works automatically: simply hover over the object/subject you want to select in your image and Photoshop should automatically highlight it.

From the Layer menu, you can also select “Mask All Objects” and Photoshop will automatically create a layer mask for any object it can detect in the image.

This all comes with a couple of caveats. The Object Selection Tool relies on machine learning to recognize different things. And it’s not perfect yet, so it might miss a few objects. So you’ll almost always have to tweak your selection a little if you want the results to look as good as possible.

Adobe has added three new beta Neural Filters and made improvements to some of the existing ones. The three new filters are:

Online art theft is a huge problem. Anyone can save any image from the web and easily pass it off as their own work. For the past two years, Adobe has been working to find ways to stop this as part of its Content Authenticity Initiative. The latest feature is called “Content Credentials”.

Anyone who creates something in Photoshop on the desktop can now embed an edit record with the exported image documenting the creation process. They can also link their social media accounts and crypto wallets to further document its authenticity, especially if they’re planning to sell it as an NFT.

And, of course, these are just some of the bigger features that caught our eyes. There are plenty of other smaller, less headline-grabbing features coming to Photoshop, Lightroom, and the other Creative Cloud apps, including: