Sony Patent Shows RX100 Followup May Be In For Brighter Lens 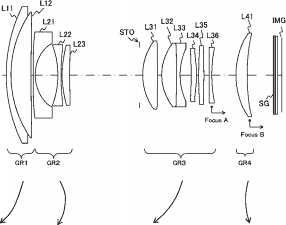 The Sony RX100 II is one of the most well-regarded point-and-shoot cameras currently available—but one of the few complaints you can legitimately levy against it is that the aperture drops off too quickly as you zoom. With a 28-100mm (equivalent) f/1.8-4.9 lens, it doesn’t take long for a lot less light to come in. But a newly-spotted Sony Japan patent is for a 28-100mm zoom lens, meant for a 1-inch sensor, with a significantly improved f/1.8-2.8 aperture range. Could this be the lens for the RX200?

Specifically, the patent is for a 10-36mm f/1.8-2.8 lens, which when you account for the crop factor of a 1-inch sensor, works out to the focal length of the RX100 and RX100 II. So when zoomed in all the way, you’d still have the rather impressive maximum aperture of f/2.8, rather than the much less ideal f/4.9 the RX100 II is currently saddled with.

However, as always, we caution against reading too deeply into the tea leaves when it comes to patents—especially those in a foreign language. There’s a lot of nuance that becomes lost when using a machine translated version of a text, and the existence of defensive patents might meant that this design never comes to fruition. In fact, it looks like Sony has applied for patents on five different lenses, three of which fall under this focal and aperture range.

But given the dominance of the RX100 II in the world of high-end compacts right now, Sony is doubtless motivated to try and keep its position at the head of the pack. And a dramatically overhauled lens would be an excellent way of doing that.