Nature Photographer from 1931 Disguises Himself as a Cactus

Not the most convincing of disguises, is it? 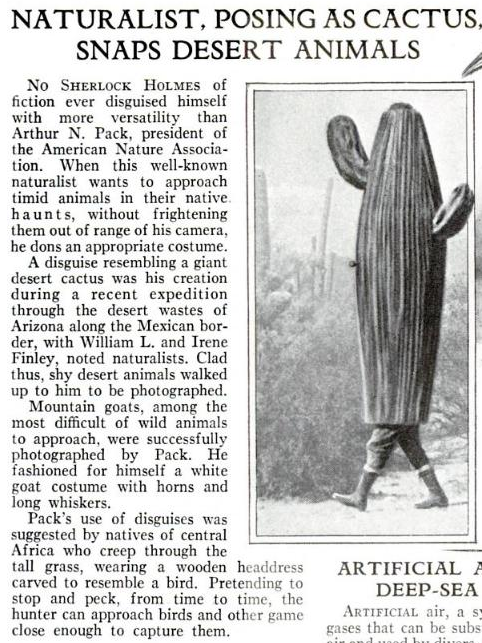 This clip from a 1931 issue of Popular Science shows a naturalist posing as a cactus in order to get close enough to snap photos of various desert animals Arizona. At the time, Arthur N. Pack was the President of the American Nature Association, and crafted a number of outfits in order to get closer to his subject.

According to the clipping, Pack even built himself a goat outfit with horns in order to get closer to mountain goats for some nature photography. While this may not be the first case of a photographer creating disguises or bird blinds, it’s certainly one of the earlier.

Pack was a storied nature photographer, writing for Nature magazine, creating documentary films, working with communities, and giving lectures at Princeton. There’s even an Arthur Pack park in Tucson (though we’re not sure if it’s the same person or not).

While this cactus outfit may seem a bit absurd to an outside viewer, it obviously worked for Pack, and variations of this technique are used to this day. You wouldn’t have incredible achievements like capturing all species of Birds-of-Paradise without being able to convincingly hide your intent from wild animals. And this clipping may very well be the beginning of photographers hiding in bizarre looking camouflage to get that much closer to their subjects.