Flowchart Shows You Which Creative Commons License Suits You the Best

Not sure which way to go with Creative Commons? This flowchart should point you in the right direction 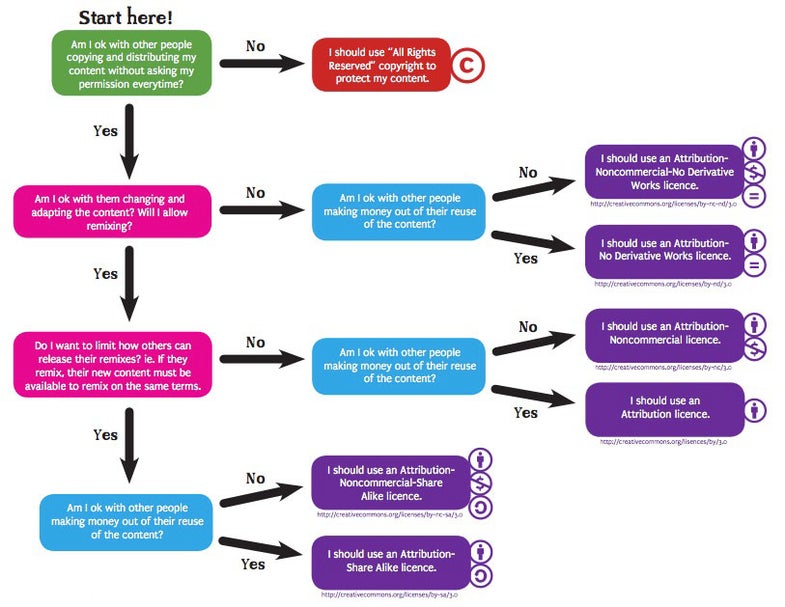 The Creative Commons licensing scheme is a tool that allows you to control just how your content is released into the wild. If you’re okay with people using your images as long as you’re credited, it’s the way to go. But with six different licenses, how do you choose which one fits with what you want? This flow chart from Creative Commons Australia takes you through the steps to do just that.

The flowchart itself was released under an Attribution license. Which means as long as you cite the original source, you’re able to do whatever you like to it. In this case, we cropped it down to just the flowchart, and used it to illustrate the article.

That’s not to say that CC licenses are perfect. There’s been substantial debate about what exactly counts as “commercial” for the purpose of a “noncommerical” Creative Commons license. Obviously, someone can’t sell the image themselves directly, but could you use it in a newspaper article? A personal blog post where you make money from AdSense? Could we use it for a piece on PopPhoto? A flyer for a local gig with a door charge?

It’s also debatable how much protection a Creative Commons license affords. With a recent case, a Creative Commons image was used to win someone else a photography prize, and it was only widespread coverage of the incident that caused the award to be revoked.

There’s also a similar tool on the US Creative Commons site, which is simpler even than a flowchart.