Modified and used without permission, this photo of a giant leopard moth won a photo-manipulator a photography competition 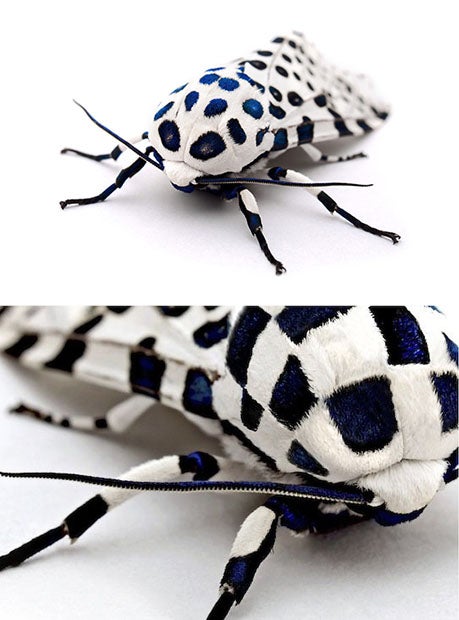 Many photographers release their images under Creative Commons licenses, so that they can be widely used, but with some basic restrictions put in place. But does this license offer any substantive protection? That’s a question that has started to percolate on news that a Creative Commons image was modified and used without permission to win a photography competition.

Photographer Kevin Collins has an incredible collection of insect photography on his website, including this stellar shot of a giant leopard moth. Collins put the image up on Flickr and Wikipedia (where it was nominated for picture of the year in 2008) under a Creative Commons license, which state that Collins has to be attributed as the original artist.

Unfortunately, that’s not what happened when the image was used to win a photography competition held by Mini. 23 year old Romain Eloy of France manipulated the image to transform the spots into a checkerboard, and submitted it to a contest themed “check-mate”, winning the competition and netting himself a MacBook Pro. Eloy did not attribute Collins in the slightest.

The competition judges said of the winning image:

But not only was the image released in a way requiring that it be attributed to the original source, but the contest rules even state “Your submission must be 100% original work.”

There are shades of interpretation that could be made on the Creative Commons side of things. The image on Flickr is released under an attribution, non-commercial, no derivatives license, which would mean that the image wouldn’t be allowed to be manipulated. But the version on Wikipedia is under an attribution, share-alike license which means you’re free to do whatever you want with it, as long as you attribute the original creator, and keep the license the same with your version.

It could be argued that the manipulations that Eloy made are sufficiently transformative that it falls under fair use, though that would be a hard argument to make. But at the very least, the edited image breaks Mini’s own rules, and Eloy should forfeit the prize.

However, Mini has come down on Eloy’s side, saying:

As you can imagine, Collins is less than impressed, telling Petapixel

Hopefully, the media attention will cause Mini to reconsider sticking with Eloy’s photograph, as it pretty clearly violates their own rules, even if you argue that it doesn’t break copyright.

UPDATE: Mini has now disqualified the edited image. The company reached out to us and said, “We have heard your concern and after a thorough investigation on the matter, the winning entry for the MINI Space Design Competition “Check-Mate!” has been disqualified retroactively. Thank you for your dedication to “Creative Use of Space” and for your team spirit!” We’re glad to see that the public scrutiny caused the company to make the right move.