Giving a totally new perspective on the nuptials, a couple tucked a camera in the bride's bouquet for their wedding 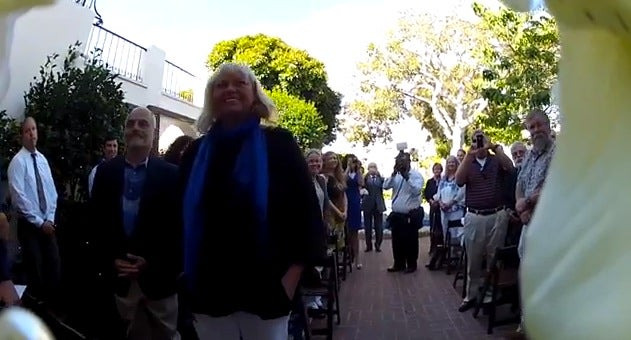 Many photographers are great at capturing weddings from every angle, but one point of view has proven elusive — that of the bride. A wedding couple decided to do something about that by hiding a GoPro HD Hero in the bride’s bouquet, giving a first person perspective of not only the aisle walk, but also the rest of the festivities.

Earlier this year, photographer Ben Horne hatched on the plan with his fiancée, and he wrote it up on his blog, and described it in the YouTube upload:

The camera is obviously far more subtle than most gear used at weddings, but judging by the footage, wasn’t exactly secret. They hold the bride’s bouquet up at high angles to better capture some of the scenes, and pass it around to capture certain events. Still, I’m betting the vast majority of people had no idea that it was being used.

I wonder if the current plans for wearable cameras like the Memoto and Autographer might not mean that this sort of thing becomes more common and popular. You could record any major life event this way — just stick it to the front of your graduation gown, or whatever.