Wounded photographer Jaoa Silva has briefly returned to photojournalist duty to cover the historical awarding of the Medal of Honor to Dakota Meyer. 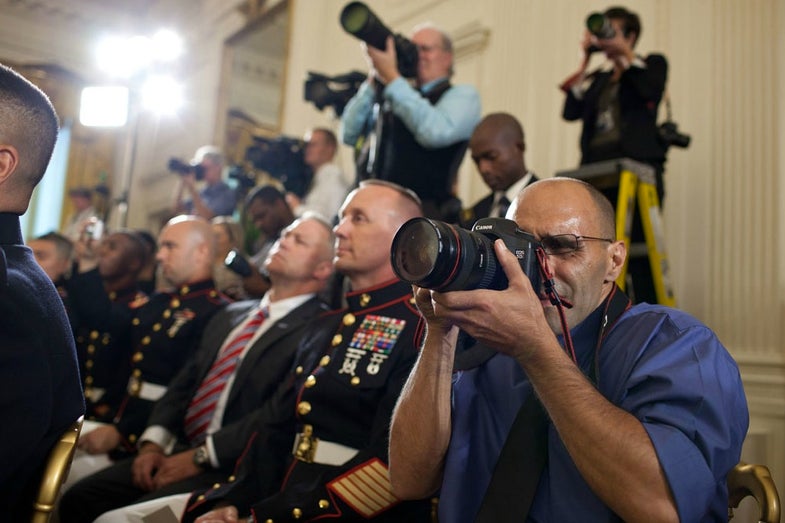 We’ve been keeping an eye on the story of famed photojournalist Jaoa Silva, from his injury in Afghanistan and into his still incomplete recovery — a recovery put on hold so that he could go back on a special assignment. Silva was asked to the White House to cover Dakota Meyer’s receiving of the Medal of Honor, and his meeting with the President.

Over at the New York Times’ Lens Blog, they look not only at Silva’s road to recovery, but also the new challenges facing him. As a photographer known for his dynamism and motion, Silva’s artificial legs slow him down, and his frustration and not being in exactly at the right place and right time in order to capture events as they happen comes through explicitly:

Silva was afforded not only the chance to photograph the award ceremony, but also the meeting afterwards of Meyer, his family and the President, and Jaoa even had a brief personal meeting with Mr. Obama himself. Even with this incredible opportunity and fantastic access, Silva’s own frustrations at not being at exactly the right place at the perfect time seems to make him his own fiercest critic.

Silva isn’t back on a regular beat yet, and still has a substantial amount of physical therapy to get through, but seeing him back and photographing the news again is nothing if not heartening, and we hope that his recovery gets him back into work as soon as he wants.