After suffering a horrific injury last year, Silva's work is back on the front page of the New York Times 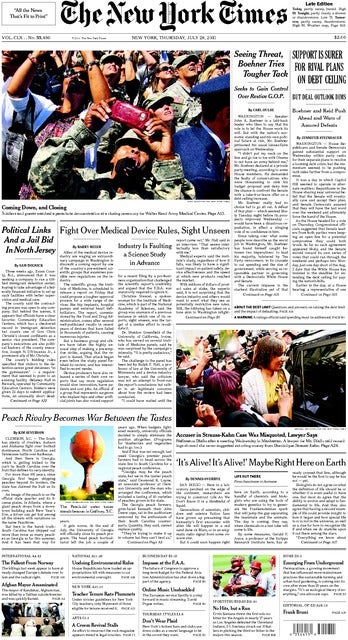 In 2010, New York Times photojournalist Joao Silva was in Afghanistan covering the conflict there, when he was hit by a land-mine. As a result, both of his legs being amputated below the knee. Now, less than a year later, Silva is back in action. His first photograph for the New York Times since the injury is plastered on their front page.

Silva’s background covering the Apartheid in South Africa as part of the Bang-Bang Club lead to a stellar career as a photojournalist, but last October’s accident saw him lose both legs and much of his intestinal tract while working in Afghanistan. Since his injury we’ve covered Silva’s story a number of times — both his treatment, and the problems facing freelancers who are injured in the line of duty.

Now, using two prosthetic legs, Silva is back on assignment, and his photograph of the closing ceremony at Walter Reed Army Medical Center in Washington made the front page. Silva was treated at the facility for his injuries, which is partly what prompted the Times to have him cover the events.

From their account, Silva isn’t quite up to his old speed, as he requires a cane to walk with his prosthetics, and some juggling to pull out a camera, but I’m betting with a bit more practice and some ingenuity, we’ll see more of Silva’s work splashed on the front page.