The RE 35 Will Not Turn Your 35mm Film Camera Digital 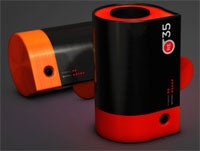 The problem with April Fool’s jokes on the web is that, as we move away from that silly holiday, the results remain online to be found and drooled over by unsuspecting folks. Over the course of the day today, we received more than a couple emails alerting us to a new product that fits inside of a 35mm film cannister and effectively turns your analog body into a digital camera. Sadly, it’s all a cruel prank.

The website for RE 35 is incredibly slick, which makes sense since it was put together by a serious design firm. All of that flash does a lot to make it seem legitimate. The site claims that everything required for the transformation fits into the film can, including a battery, flash menory for storage and even a flexible CCD censor that can be retracted when not in use. There’s even a picture of the packaging, which outlines the 4-, 8-, and 12-megapixel flavors.

A few subtle jokes on the page make it more obvious that we’re not dealing with a real product. For instance, the phrase “Set the ISO to 400 and your done – your camera will now take high quality digital pictures,” should send up a red flag while providing a good chuckle. There are also some obvious technical issues that would prevent a product like this from working in “all” cameras as the page suggests, especially rangefinders.

While it might have been funny a few days ago, the joke is getting increasingly cruel, sitting there on the web, waiting to raise the hopes of die-hard Nikon F5 users, only to dash them to the ground. Of course, they could always pick up that Digital F3 from last week’s Ebay Watch.

Sadly, there’s also a decade-old version of a similar technology that wasted away into the land of vaporware. The company was called Silicon Film Technologies. Problems with power and other issues relegated the 1.3-megapixel film-like sensor tech to the list of products that just never happened.