Sony’s latest update may not be quite as exciting as the recent unveiling of their NEX series interchangeable lens compacts,... 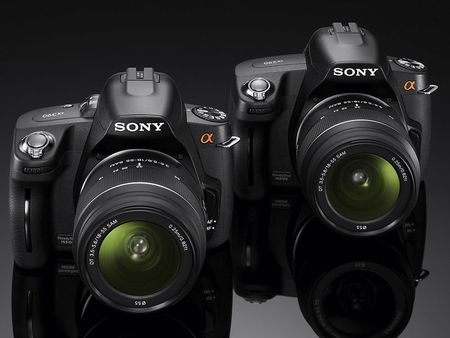 Sony’s latest update may not be quite as exciting as the recent unveiling of their NEX series interchangeable lens compacts, but it’s hard to complain about better specs in entry level cameras. The A390 and A290 are upgrades to previous models, the A380 and A230. As the minor name change suggests, the update is rather incrememental. Both cameras come toting 14.2-megapixel image-stablized, APS-C (23.5 x 15.7mm) sensors, a tweaked grip and a changed-up button layout to make the extremely compact DSLRs more comfortable on the hands. There are some minor differences between the bodies, but the most noticeable are the addition of Sony’s Quick AF Live View mode and a 2.7-inch tilting LCD on the more expensive A390.

You’ll notice that there’s no mention of video of any kind, let alone HD, which makes sense once you see the price points. Both cameras are slated to be released over the summer, with the A290 to set you back $500 with an 18-55mm kit lens and the A390 checking in at $100 more. It’s good to see that Sony hasn’t given up on the entry-level DSLR market, even though it will almost definitely be competing in the minds of some consumers with the NEX series. Now, on to the pro model upgrades, right guys?