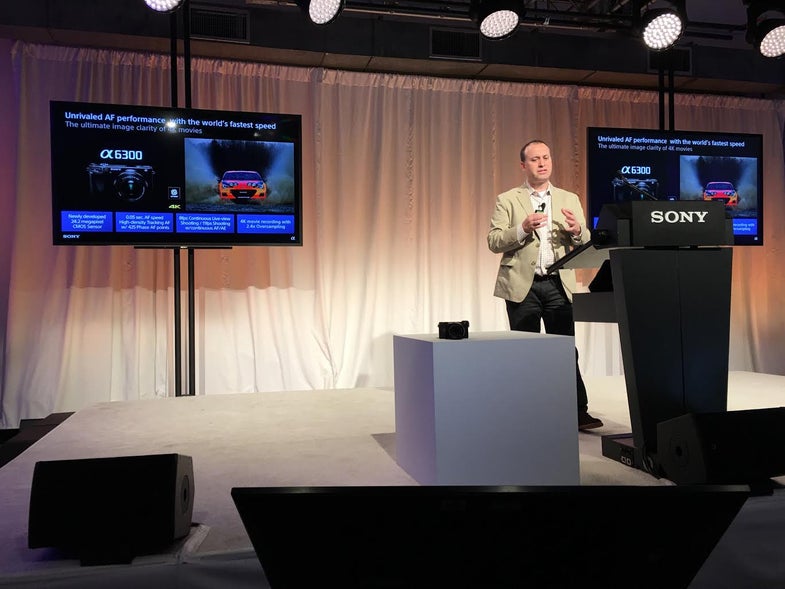 This morning in NYC, Sony was eager to make a camera announcement after the CES hype had died down. After announcing that the Sony A6000 was one of the best-selling interchangeable-lens cameras of all time, the company dropped the brand new A6300 on us.

As the name suggests, the A6300 is the spiritual successor to the mega-popular A6000. It’s built around a redesigned 24.2-megapixel APS-C CMOS sensor that uses new materials including copper wire to make it more responsive and provide better low-light performance. It can capture up to 11 fps total with AE and AF.

One of the biggest improvements can be found in the AF system, which now has a rather crazy 425 phase detection points across a very large portion of the sensor. That gives them options in terms of AF performance, including modes that use clusters of AF points to help track moving objects.

Sony also puts a clear emphasis on video, adding in-body 4K capture. It’s not just tacked on 4K, either. They clearly put a lot of thought into the video capture mode, giving it full pixel readout with no pixel binning. If you know what that means, you know it’s a big plus for cinema shooters on a budget.

I’m hoping to get some hands-on time with the camera here at the NYC press event so stay tuned to this page or our social media channels for more coverage!