New Gear: The DxO One Is a Supercharged iPhone Camera

Turn your iPhone into a photography Voltron 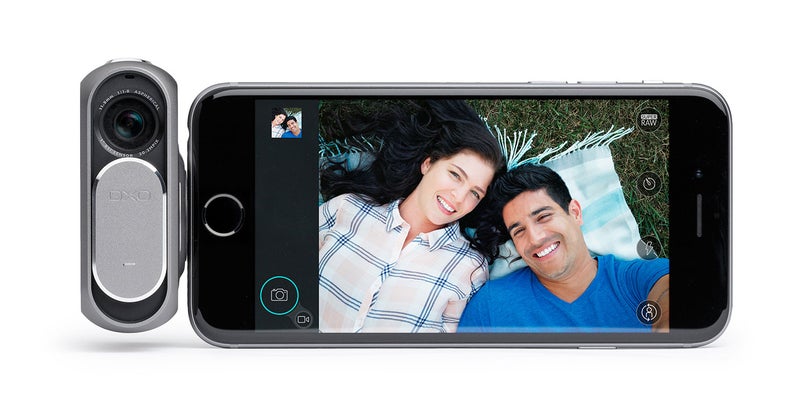 The DxO name is a very familiar one in the photography world for both their software and their methods for scientifically testing image quality on cameras and lenses. In fact, we use lots of DxO products for testing here at PopPhoto, but now they’re taking the leap and making their own camera called the DxO One.

The idea behind the One is that it adds a much more capable camera to your iPhone, while leveraging the smartphone’s strengths like editing apps, sharing capabilities, and of course, that great big touchscreen.

Inside the DxO One is a 1-inch, 20.2-megapixel BSI sensor, which gives it a pretty immediate advantage over any typical smartphone camera. The body itself is made of aluminum and weighs just under a quarter of a pound. The lens has a 32mm equivalent field of view with a maximum aperture of F/1.8. So, compared to the iPhones F/2.2 maximum aperture, it will be brighter and offer shallower depth of field.

Rather than relying on a wireless connection like the Sony QX cameras, the One has a Lightning connector built directly into it, so you actually plug the camera module into the phone and hold the whole thing like it’s a camera. The whole module can rotate up to 60-degrees, so it’s not totally fixed once it’s attached to the camera.

From an imaging standpoint, there’s clearly a lot of pressure on DxO to make it perform. After all, they spend a lot of their efforts passing judgment on the optical performance of other cameras. They claim the sensor racks up a DxO score of 70, and increases all the way up to 85 if you use their SuperRAW format.

In addition to the pure hardware benefits offered by the DxO One, you also get things like a shutter speed range from 15-seconds all the way down to 1/8,000 and a lofty maximum ISO of 51,200. You also get various shooting modes, most importantly manual modes like shutter and aperture priority, and full manual.

If you’re still thinking about that SuperRAW thing I mentioned earlier, it’s basically a mode that captures four different images in extremely rapid succession and then uses them to get rid of noise. When shooting, the camera saves the raw DNG files so you can upload them later, but also allows you to edit the JPEG versions in whatever mobile app you should choose.

Now, how much does all of this cost? You should expect to pay $599 for the DxO One when it starts shipping in December. If you consider this purely an iPhone accessory, then that probably sounds like a lot, but this thing does have a surprising amount of imaging power built into it, so it’s definitely a full-fledged camera. As part of that price, you also get a license for DxO OpticsPro and DxO FilmPack, which makes it a significantly better value.

We’re excited to get some more extended hands-on time with the DxO one. One of the big gripes I always had with cameras like the Sony QX was how long it took to get the wireless connection going. In this case, slapping the connector into the port and starting to shoot seems like it might actually be a smoother process until the whole NFC and Wifi combo speeds up significantly.