Is this the next evolution of the compact camera? 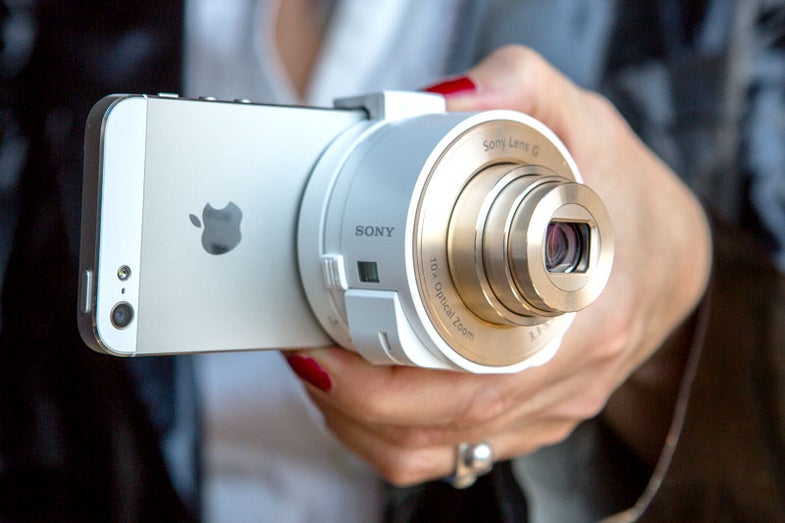 It’s no secret that smartphone cameras have beaten up the compact camera market. Rather than fighting the change, Sony seems to be embracing it with their new QX-series Cyber-shot cameras. These cylindrical bodies have most of the stuff you’d expect to find in a compact camera, including a zoom lens, a sensor, an image processor, a memory card slot, and control buttons. What it doesn’t have, however, is a screen. That’s where the smartphone comes in.

The QX10 and the QX100 both use a built-in wifi connection to communicate with a smartphone. The app can be used to compose, review, and process images in real time. It’s similar to the way the GoPro app works with their cameras, only Sony’s seems to move much faster. Like the GoPro system, the camera itself creates an ad-hoc network to which the phone can connect. Using NFC — Near Field Communication, which Sony is currently very enthusiastic about — syncing the camera to the phone simply involves touching the two together in a specific way.

The QX100 is basically the guts of an RX100 Mark II without the screen. That means you get the same 1-inch 20.9-megapixel sensor and Zeiss zoom lens. The QX-10 gets a smaller 18.9-megapixel sensor, but gains a 10x zoom lens to help make up for the loss in resolution. One definite downside is that Raw capture isn’t included, but we’re hoping to see it added in the future.

Both cameras have built-in shutter buttons, as well as zoom controls. Both accept micro SD as well as micro Memory Stick, but you can shoot stills without a memory card. When you do have a card loaded, you can choose from three sizes for the images that are transferred to the phone. You’ll need a memory card in the camera to shoot video, but both are capable of going up to 1080p, which will blow smartphone cameras out of the water.

I had some time to mess with a few pre-production models and I was actually very impressed. Pairing is quick, and more importantly, the lag time on the LCD screen is minimal. With the GoPro, there’s a noticeable delay between moving the camera and seeing the change of PoV, but the sony wasn’t all that much slower than a typical camera in live view mode.

The cameras themselves are surprisingly small. They can fit in your pocket, but I wouldn’t advise carrying it around in there. The clips that hold the camera to a phone fit most phones — even the large ones — and they hold very securely. I thought it would feel sketchy holding onto just the phone, but it’s actually quite secure. If you take the phone clamp off, the actual camera units get even smaller.

One of the coolest things about the QX cameras is the range they offer. You can keep the phone in your pocket if you’re confident in your framing skills. Or, you can hold the camera unit at weird angles while previewing it on the phone.

Both of these cameras leaked some time ago, and it seems like a lot of people around the internet have already made up their minds. But, I have to admit that holding these in my hand piqued my interest much more than I expected. The prospect of using the built-in tripod socket to stick these things in spots and control them with my phone in real time is very appealing. The idea of going way beyond an articulating screen in terms of flexibility could be very useful.

The QX10 will cost $248 and the QX100 will be $498, making it cheaper than the RX100 Mark II. The idea reminds me a bit of the idea behind Ricoh’s GXR camera, which used a static body with interchangeable modules that included a lens mount, sensor, and processor. It would be interesting if Sony could bring this into the world of the NEX cameras. That might be wishful thinking, but who knows what’s going to happen at this point.

What do you think? Is this the next phase of compact cameras?