Binary stars are at the heart of this celestial crustacean. 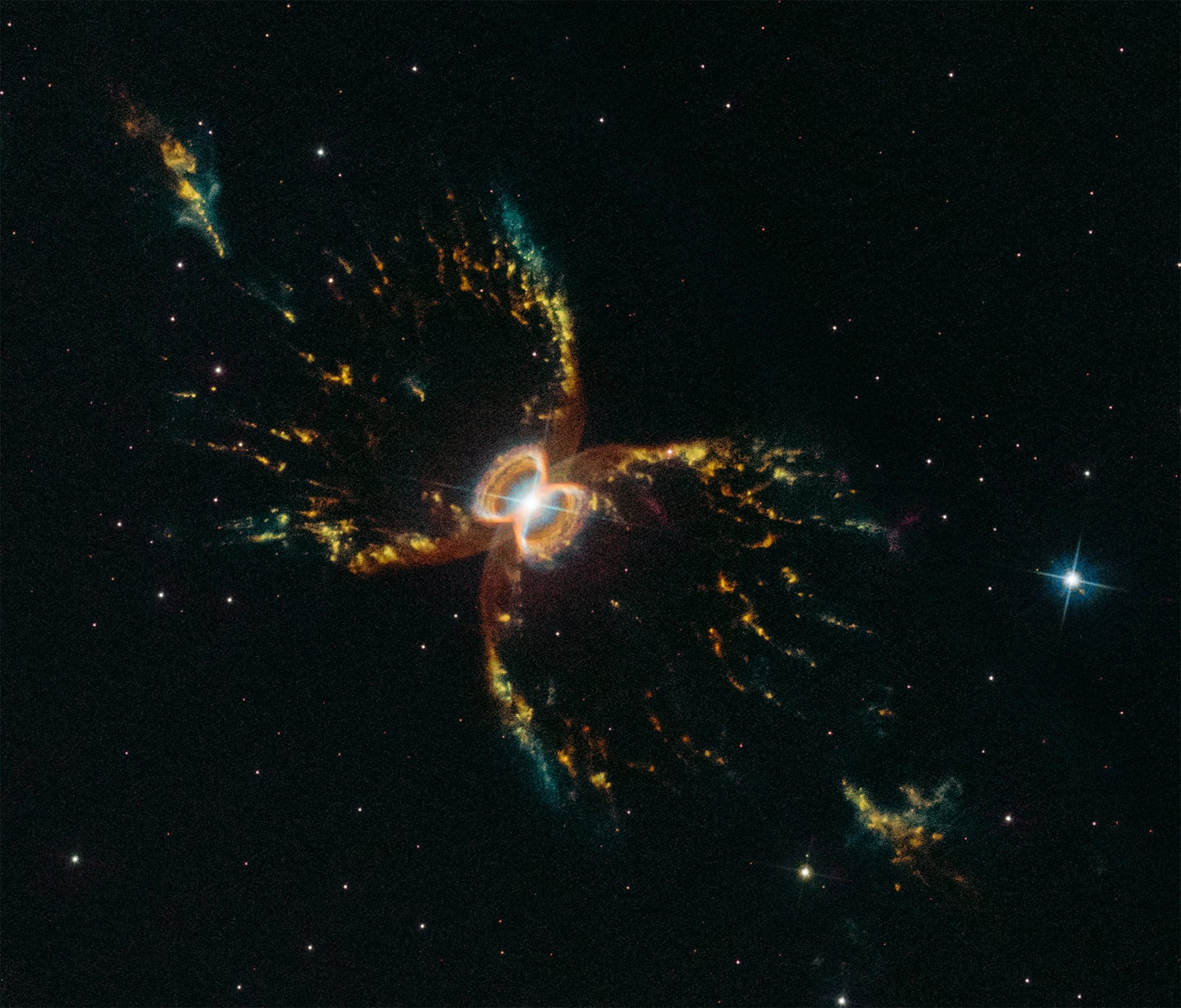 The Hubble Space Telescope gave us a gift for its 29th birthday: This image of the Southern Crab Nebula. Located over 6,800 light-years from Earth, the hourglass-shaped formation of gas and dust—also known as Hen 2-104—was formed by two aging stars locked in a cosmic do-si-do in the constellation Centaurus.

The two swirling objects make up a binary star system, and they’re at very different stages in their lives. One is a white dwarf: A small, burnt-out core of a star that’s one of the densest objects in the universe (a spoonful of its matter would weigh as much as a truck). The other is a red giant: a bloated, cooled-down star that’s stopped burning hydrogen and started burning helium, which is a sign that it’s well on its way to becoming a white dwarf.

Because of its density, the white dwarf has an immense gravitational pull on the red giant, sucking matter off of its larger neighbor and twirling it into a high-energy ring of gas called an accretion disk. Eventually, all that energy heats the white dwarf up to a temperature of 15 million degrees, igniting the gas in the disk and causing a thermonuclear explosion called a nova. In the Southern Crab Nebula, all that gas shot outward in an hourglass shape, creating the symmetrical “legs” of the crab as it lit up interstellar gases and dust particles, possibly deposited there by a prior explosion.

Just a dot in the southern sky to the naked eye and low-powered telescopes, the Southern Crab Nebula was first distinguished from an ordinary star in 1989, when the crab leg structure was first observed by the European Southern Observatory’s La Silla Observatory in Chile. In 1999, Hubble photographed the nebula and revealed a smaller hourglass nested closer to the stars within the nebula. Twenty years later, it used its sharpest imaging mechanism yet, Wide Field Camera 3, to capture this latest image. The nested hourglasses of gas and dust could point to a previous explosion of matter from the red giant.

RELATED: Jupiter’s roiling clouds are a thing of beauty

Rocketed to earth’s orbit on April 24, 1990 (yes, Hubble is a millennial), the telescope snapped this portrait in time for the 29th anniversary of that launch on Wednesday. In its nearly three decades of operation, Hubble has made over 1.4 million observations of almost 45,000 objects in space. It’s orbited Earth more than 169,000 times—a distance nearly equivalent to traveling from Earth to the outer edges of our solar system.

Hubble has one of the most perfectly made mirrors of any telescope, and its position above the atmosphere allows it to capture light that can’t be seen from earth’s surface, or gets muddied by the atmosphere. Its resolution has allowed it to peer so deep into space (and so far back in time) that it’s helping astronomers see closer to the birth of the universe.